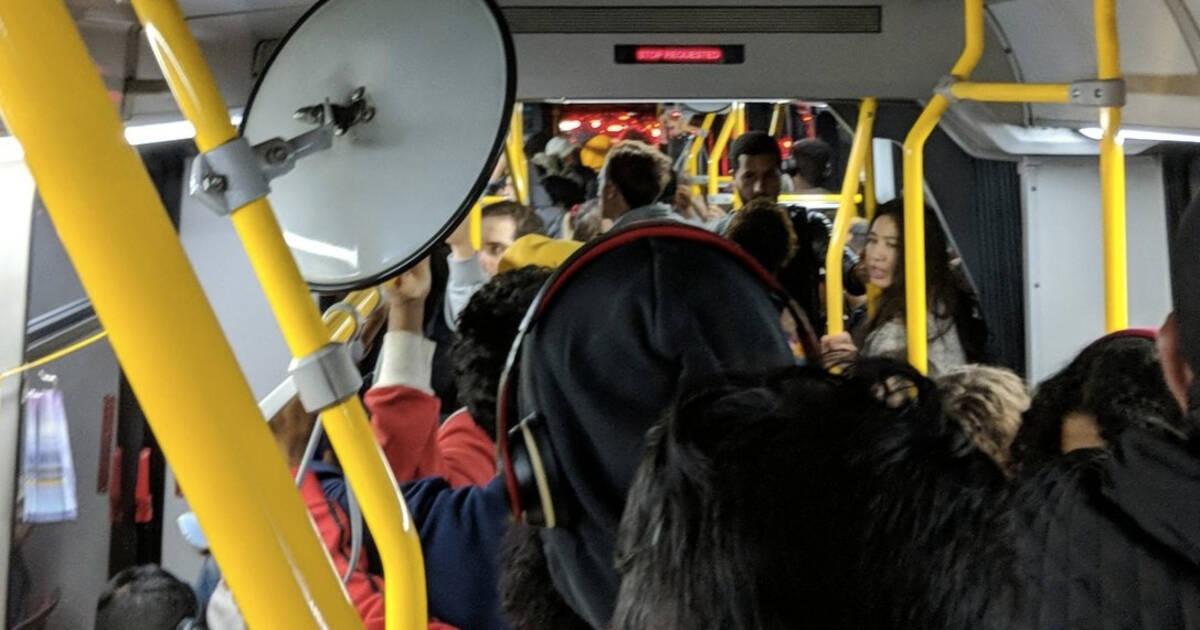 Thanksgiving weekend brought with it a whole host of major road and subway closures in Toronto, giving residents and visitors little to be thankful for in terms of traffic flow.

The controversial, three-day-long closure of Toronto's Gardiner Expressway from the DVP to Highway 427 threw drivers into a tizzy of rage, but there were plenty of problems to be found within the city grid as well.

I think every resident in Toronto deserves an extra day off due to the amount of time wasted this weekend sitting in traffic because of the closure of the Gardiner, the Bloor/Danforth line and the Lakeshore Go line.

Anyone who'd been planning to get across the city by subway on Saturday or Sunday found themselves out of luck with the TTC's closure of Line 2 from St. George to Woodbine Stations for "scheduled track work."

Might not be the best spot to store construction equipment and have a off-loading of a shuttle bus at St. George Station.

Seniors and others are forced to take a giant leap and there is no room on the sidewalk to step on. @TTChelps @311Toronto pic.twitter.com/fX1s2keARv

Shuttle buses were sent out across Bloor Street and Danforth Avenue to bridge the gap along Toronto's busiest east-west transit routes, but they were slow. They're always slow.

Any idea why shuttle buses are barely moving along Bloor? It’s taken us ~18 minutes to get from St George to Bay...

Despite plenty of advance warning from the TTC and City of Toronto, a lot of passengers were unaware that the subway line would be closed off this weekend.

This resulted in major overcrowding and frustration across the city.

@ttchelps I'd like to share my Line 2 Shuttle experience from now. 38 min https://t.co/5ldDmLU0yN to Woodbine + 14 min wait for shuttle bus due to crowding. No traffic control at all. Passengers dumped in bike lanes. Supervisors should be aware please. Now 6 min for train 😞 EB pic.twitter.com/TkbXZqZ3kj

Shuttle buses were particularly slow along the Danforth, which isn't used to hosting frequent buses due to, you know, a massive subway running beneath it.

What happens when your uploaded #TTC subway

1. Breaks down
2. Is blocked by fire
3. Halted by suicide

during rush hour and you need to call in dozens and dozens of @TTChelps shuttle buses?

Are you going to upload those, too? pic.twitter.com/IszO5DB2QY

Police did their best to ensure that cars weren't parked or stopped in drop-off zones...

Good morning #Toronto. Today I am assisting @TTChelps on the Danforth for the subway shut down on the Bloor-Danforth line. Helping keep the shuttle bus stops clear. Do not stop/park within signed/pilon areas or your car will be removed ! #TTC @TTChelps @TorontoPolice pic.twitter.com/HHPAcXwrDy

... but parking problems (not to mention construction-related blockages) persisted, and commutes were incredibly slow.

I'm going absolutely stark raving mad! I mean, turkeys are the only things that should be stuffed on thanksgiving and NOT people into shuttle buses #ttc it's just a horrible thing to do to us on a major holiday. Watch them ruin Xmas also!

Frustrated travellers turned to Twitter with complaints and suggestions.

Hey @cityoftoronto, @TTChelps - I get that the subway needs to be closed for repairs sometimes but when that happens can you also remove the parking from Bloor/Danforth so that the shuttle buses can have their own lane? 45 mins to get from Woodbine to Yonge is a little much.

"With all due respect, subway lines should not be stopped during day time on weekends as shuttle buses take twice or thrice times in traffic hours," wrote one person to the TTC on Saturday afternoon.

"I do understand your concerns – this impacts my commute as well," wrote back a customer service representative for the transit agency.

"However, these full day closures are necessary as a single day provides us with the equivalent of 5 weeks of regular night work. These windows are rare and are much more effective in the long-term."

by Lauren O'Neil via blogTO
Posted by Arun Augustin at 7:16 AM