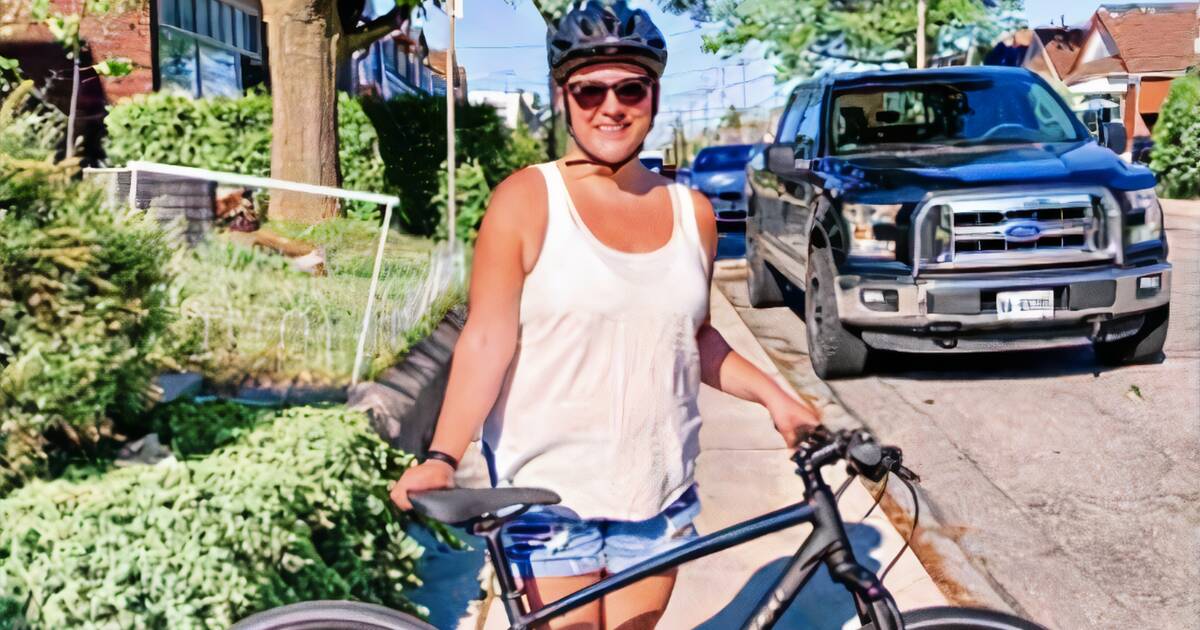 Gina Nighswander Driedger first started biking to work when the pandemic began. She's a nurse at SickKids and was too nervous to continue taking the TTC, so she followed her husband's lead and decided to go the cycling route.

"I had only been riding in for about a month when it happened, and every single day I biked in, I would think 'Man, I really should get a key to the bike cage at work,' but couldn't get my schedule to line up with the office's hours," she said.

"Then one day, after a particularly long shift, I came outside to find someone else's bike locked up where mine had been. I searched everywhere for it, and eventually realized that it had been stolen. Another staff member found pieces of my lock on the ground next to where the bike should have been, confirming the idea."

Driedger said she was shocked and stunned that someone would steal a bike from in front of a hospital, especially amid a pandemic.

But when her husband suggested she write in a few community Facebook groups to ask if anyone had seen it, she never anticipated the reaction that came next.

Driedger said members of the community groups immediately reacted with outrage, with many calling her a hero and saying she's the last person who deserves to have her bike stolen (though she says she still doesn't think of herself as a her0).

She said her favourite comment of all, however, was when someone said they hoped whoever took the bike really needed it and that they were able to use the money for whatever it is they were so desperate for.

She added that many people suggested there should be a collection to raise money for a new bike, but it wasn't until one Good Samaritan set up a GoFundMe page that people really started to pitch in.

The fundraiser was shared across several Facebook pages and, after just 48 hours, the community raised $600 for a brand new bike.

"The support was incredibly overwhelming. First of all, there are so many people out of work right now, and yet they're still giving money for me to buy a bike. Here I am, with probably one of the most stable jobs of the time, receiving from those who may have so much less than me," Driedger said.

"And yet there's a feeling that people need to connect to something good in this world, especially with COVID happening. I think people are so over hearing the bad news, the scary stories, and living in fear, and wanted to do something concrete and good to help where they can. It's absolutely inspiring. They wanted to be part of a feel-good story for once."

She said it was the kindness and generosity of so many strangers that inspired her to pay it forward, which is why she is now collecting used bicycles to donate to the Women's Cycling Network.

It's #ONWomensCyclingWeek! The Women's Cycling Network is looking for donated bikes they can find a good home for and help get more women on two wheels🚴‍♀️🚴‍♀️ #BikeMatchWCN

The organization was co-founded by Nadjia Zewari, the leader of Women's Wellness Café, with help of Cycle Don Valley Midtown.

According to Driedger, they're an inclusive group of nearly 100 women from the Thorncliffe Park and Flemingdon Park communities as well as neighbouring areas.

"These women find freedom, empowerment and health benefits by riding a bike. Today we have 50 women who have bikes and have learned to ride, and another 50 waiting for a donated bike so that they can learn to ride too," she said, adding that she's offered to do some pickups and is also helping to arrange matches between bikes and the network.

And yes, even through all this, she is still working as a nurse at SickKids — which she says has been quite the roller coaster.

"Especially at first, I was terrified. I had two little boys at home, and a husband I care deeply about, and I was (still am) absolutely terrified of bringing home COVID," she said.

"We nurses see communicable diseases every day, and that's part of our job, but there is something different about a global pandemic that makes me second guess everything I do."

She explained that she's had to develop a routine that adds about an hour of extra work to her day in which she makes sure to safely change all of her clothes before and after her shift, while also decontaminating all of her things and making sure the piles don't mix.

"The smallest slip up could land my kids in hospital and I couldn't live with that. It might be overboard but the health of my family is worth it," she said.

"I'm just grateful that I've been able to stay at home with them, and not live in hotels apart from my family for months on end, which is what it was looking like might happen at one point. At this point, we have a routine, and my kids know that they 'Don't touch mommy until she's had her shower.' It's a new normal. One I'm happy to do for their sweet little faces."

by Mira Miller via blogTO
Posted by Arun Augustin at 10:48 PM