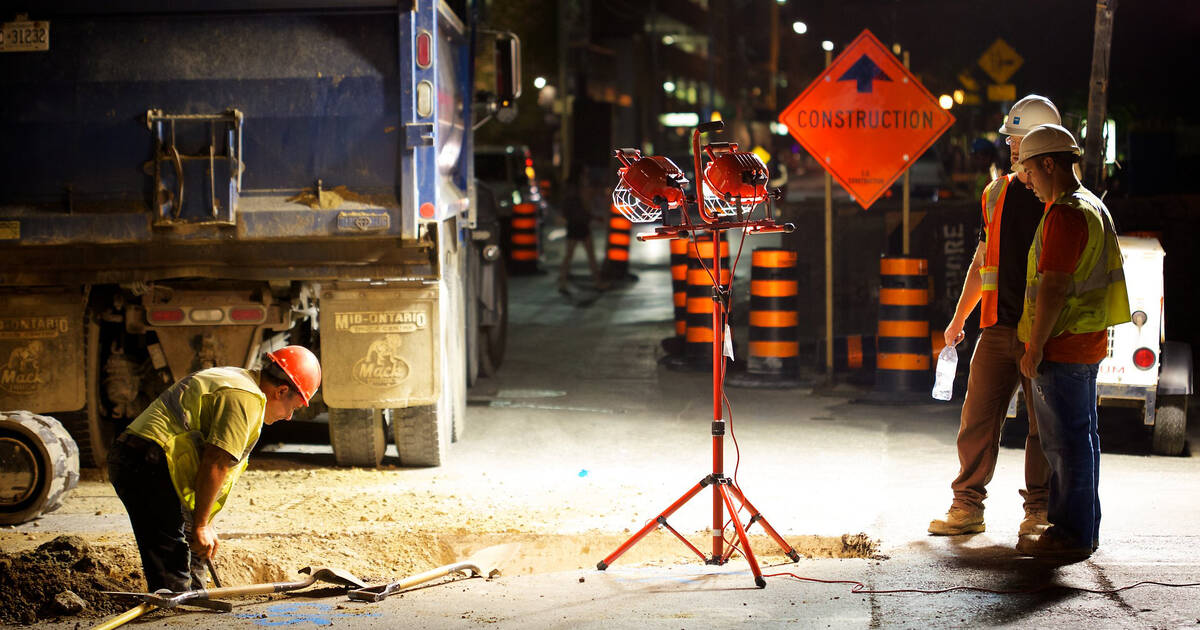 "It's 2:36 in the morning and I am having another sleepless night in the middle of the week because of construction noise," said Sara Caspian, who lives near Eglinton.

"It has now been 3+ months. The construction has been frustrating and ongoing this entire time. On Sunday June 18th, we snapped when we heard loud drilling and construction noises on Sunday night all the way until 9:40pm," wrote Izzy Piyale-Sheard in a Twitter thread detailing the ongoing problems.

"They started building a crane at 4:30 a.m. and I kinda lost my mind," a resident who's been living across from the construction site at 505 Richmond Street West told blogTO.

Construction at many of these sites, like the new Waterworks condo building and the Eglinton LRT, have been ongoing for the last few years but residents say that it's only been since the pandemic that the construction has become unbearable.

"It was obviously awful when they started at 7 a.m. but we made our peace with it. Then during COVID, because of the emergency measures, they're  allowed to start at 6 a.m.," one of the residents told blogTO.

In April, the Ontario government announced they were extending construction hours for essential projects such as hospital builds, expansions and COVID-19 assessment centres.

The new order, which came into effect April 7, allows companies to staff construction sites 24 hours a day, seven days a week, and make adjustments to local noise bylaws to accommodate the work.

"We're helping to protect the health and safety of construction workers and ensure that critical health care-related construction projects continue during this outbreak," said Steve Clark, Minister of Municipal Affairs and Housing.

"Temporarily limiting noise bylaws to extend the hours for construction work will help make it possible to stagger shifts and have fewer workers on site at any given time so they can practice physical distancing."

Condo buildings were added to the "essential" construction list on May 6 as part of Ontario's reopening plan.

"This will help clear the way for the housing and jobs our economy will need to support economic recovery from the impacts of the COVID-19 outbreak," the government said in a statement.

And it seems developers jumped at the chance to take advantage of the new rules but residents are questioning how essential the work really is.

"There doesn't seem to be a thing that anyone considers a priority," said a frustrated Toronto resident blogTO spoke with. "Construction is always going to be annoying but I don't see a reason why it can't be 9 to 5."

"Whose idea was this? We’re all stuck at home, surrounded by construction noise and dust. This *is* a cry for help," said Greg Elmer on Twitter.

To add insult to injury the Toronto noise complaint hotline is suspended and any complaints about construction need to be sent to Toronto Building Inspections.

City councillor Josh Matlow filed a motion on June 9 requesting the province give back control of construction by-laws, specifically the new regulations that were put in place on April 7 that doesn't let the City to regulate or prohibit noise in connection with construction.

"Allowing major construction from early in the morning until 10pm, while people are being asked to stay home, has the potential to greatly impact residents’ quality of life and mental health by subjecting them to constant noise," he wrote.

The city has yet to make any formal announcements regarding the return of normal construction by-laws.

by Misha Gajewski via blogTO
Posted by Arun Augustin at 11:48 PM