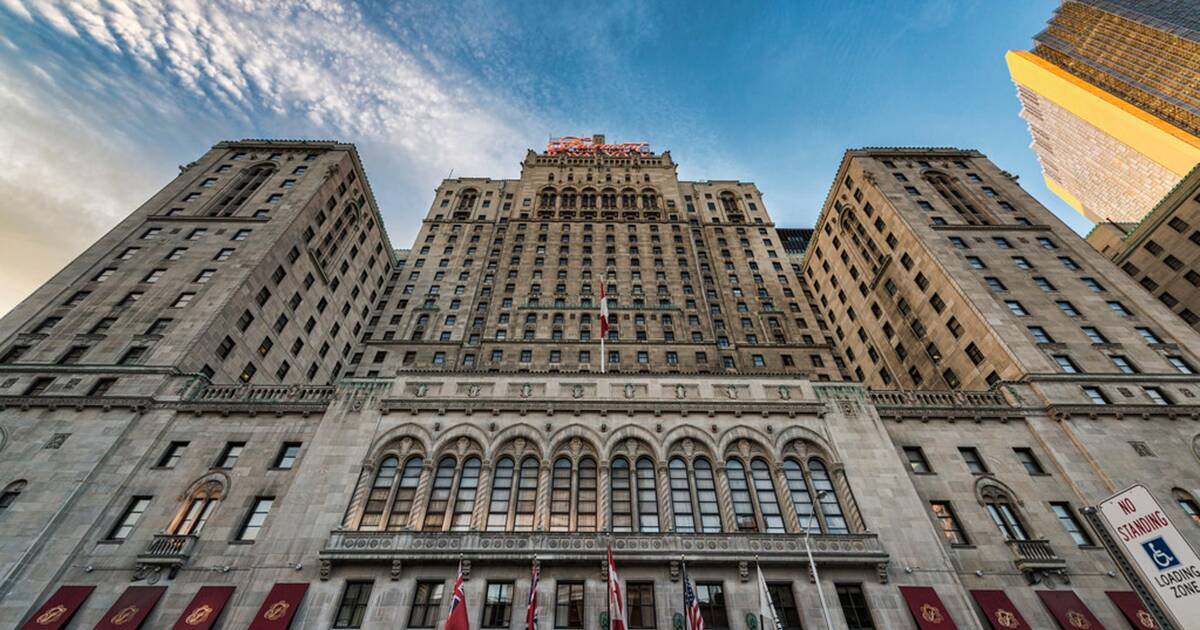 News that the NHL has chosen Hotel X and the Fairmont Royal York as the "bubble zones" where teams will be staying when the league resumes may be exciting for hockey fans eager for the return of the game, but it's had the opposite effect on couples who were set to be married at the Royal York later this summer.

Kate Christie is half of one of these couples, and she and her partner were set to hold their wedding in the historic venue this August.

"We booked our August elopement in June, and were so looking forward to finally celebrating us after such a stressful year," she told blogTO.

"For those engaged couples, 2020 has already been a year of incredible turmoil, often having to rebook their big day multiple times, having vendors not return deposits, and forced to pay switch fees. Essentially, we've been monetarily handcuffed to our weddings."

My fiance and I have been trying to plan a micro-wedding (after we had to postpone due to covid) and I gotta say, pretty gutty of the Royal York to offer micro-wedding packages knowing Toronto was a hub-city favourite. Having to postpone one wedding, then cancel another... oof... pic.twitter.com/E0Mobmsxz6

Christie said the Royal York must have picked up on the fact that this was happening to couples throughout the city, as they quickly began offering elopement and small wedding packages in their beautiful ballroom at a fraction of the regular cost.

"They touted themselves as the heroes of the current wedding climate, offering flexibility, a pre-decorated room, and of course their epic photo ops," she said.

But a few days ago, Christie and her partner received an email saying the hotel wanted to discuss the specifics of the ceremony now that the city's mandatory mask bylaw was in place. She added that they were more than happy to do so, but the conversation quickly took a turn.

The Royal York employee began offering them a new location at the same price (indoor and outdoor options), which Christie said she found odd considering the hotel has both its rooftop and new patio to offer as outdoor spaces if this was the main concern.

"Conveniently, the last point of the call was that really, we had no choice but to either move the location or the date as the hotel had just been fully booked for a 'conference,'" she said.

"Described as a six-week conference and a bubble from July 25 to September 1, it's very clear what this was. The NHL had chosen Toronto as a bubble to complete its season."

And it seems the dates do in fact line up with what TSN has reported about the NHL bubbles.

According to TSN senior hockey reporter Frank Seravalli, teams are slated to arrive in their hub cities (Toronto and Edmonton) by July 26, and games are set to begin on Aug. 1 — as long as all players consistently test negative for COVID-19.

And while Christie acknowledges that this is undoubtedly an incredible business opportunity for a company that has likely been hit hard by the financial impacts of the pandemic, her issue is with their lack of transparency.

She cites articles explaining that bids for the NHL bubble were placed back in March and April, while the hotel was still offering wedding packages at that time and beyond.

"The Royal York was operating and providing contracts to couples in bad faith. They could have given couples a heads up that there was the potential for a date change or cancellation, and it would have been our choice to go forward," she said.

"For couples who have already had their hearts broken this year, we've found ourselves in the same position the Royal York swore it was better than."

She suggests they could have blocked the dates, or given couples a disclaimer regarding the potential change. And this point, at the very least, she wants the hotel to give back peoples' deposits.

"I urge the Royal York to make things right with these couples," she said.

"And I also urge Doug Ford to finally take a stance on both vendors and venues who have so blatantly been taking advantage of couples. Give people their deposits back — it's simple. People have lost their life savings, put their lives on hold, and been forced to miss milestones with their loved ones."

The Fairmont Royal York did not respond to a request for comment.