The top 25 doughnuts in Toronto by neighbourhood 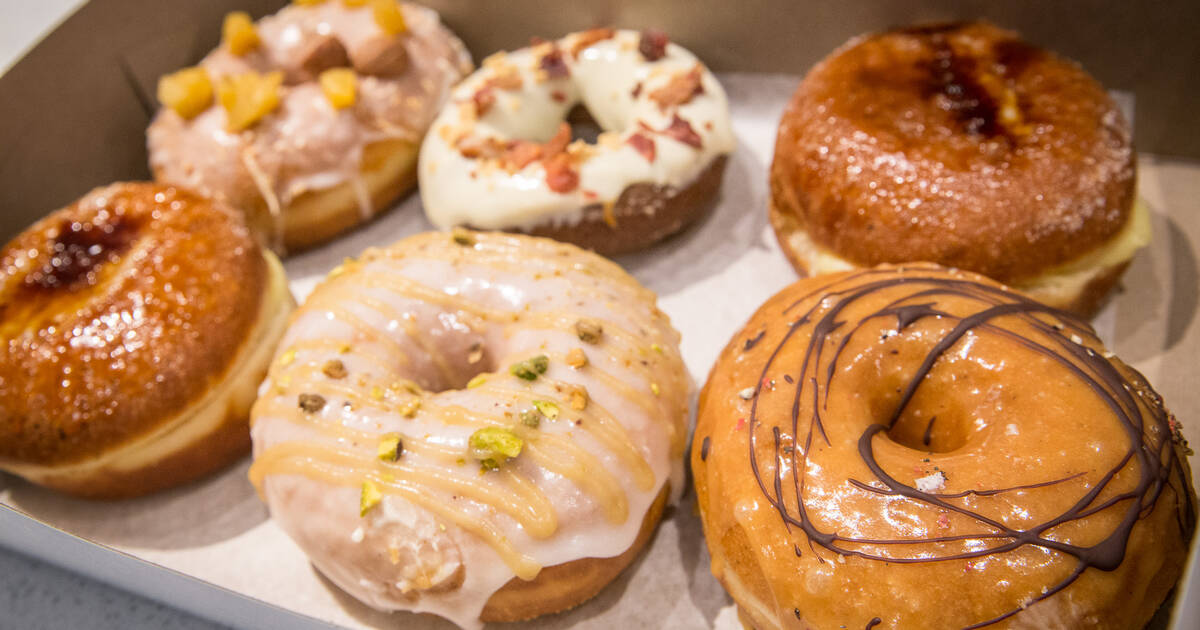 Doughnuts — or donuts, whatever — in Toronto by neighbourhood don’t include the Tim's variety, but they do include some sweet treats that are just as good (better, actually). From the sugar-dusted variety to vegan kinds, the city has got it all.

Here are my picks for the top doughnuts in Toronto by neighbourhood.

All-natural, vegan and organic: what more can you want from the doughnuts at Tori’s Bakeshop where you’ll feel completely guilt-free eating their mouthwatering pink vanilla doughnut with sprinkles on top.

It’s no longer called Anna’s Bakery but Janchenko Bakery still serves up homemade Eastern European desserts including their famous ponchiki, a traditional European doughnut that they fill with plum purée.

Tre Mari Bakery has been baking up a storm since 1960, and despite being old school, they’ve managed to keep up with the times by offering creative treats like maple-coated vanilla doughnuts alongside their loaves of Vienna bread.

The gourmet doughnuts from Von Doughnuts look like art, with daily doughnuts like the Mangiacake (a vanilla bean dipped beauty), the Homer Simpson, and the Malt Vinegar, which literally has chips on top. 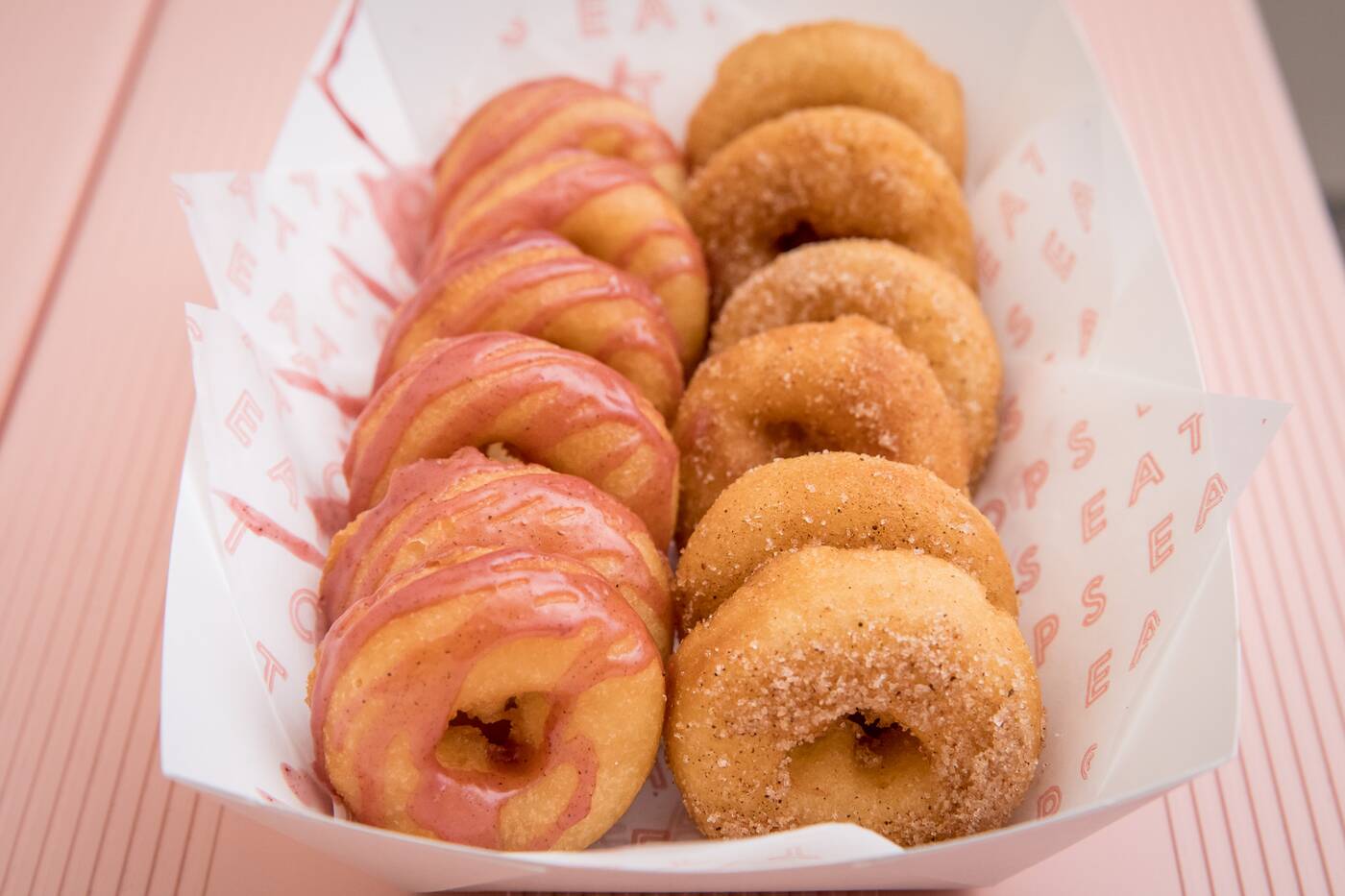 Mini doughnuts don't get much tastier than the ones available at Cops. Photo by Jesse Milns.

Ballissimo Loukoumades Bar specializes in what are essentially the original Timbits of Greece, Ballissimo's honey-doused dough balls that are made from scratch.

SanRemo Bakery is a certified doughnut mainstay. This Italian bakery is always busy with people lining up for their ice cream-filled doughnuts and lemon meringue creations.

It’s hard to find gluten-free doughnuts that taste like the real deal, but The Butternut Baking Co. specializes in mini doughnuts made with almond flour that are low-carb and diabetic-friendly.

Dipped Donuts is Toronto’s source for scratch-made donuts hand-dipped in glazes and toppings made from locally sourced ingredients. Indulge in doughnuts like Cookies n’ Cream and London Fog.

Pair the delicious little doughnuts from Cops with some drip coffee. It’s a perfect combo brought to you by the same people as Baddies who are moving their attention from brunch to cinnamon sugar and glazed goods in an all-pink setting. 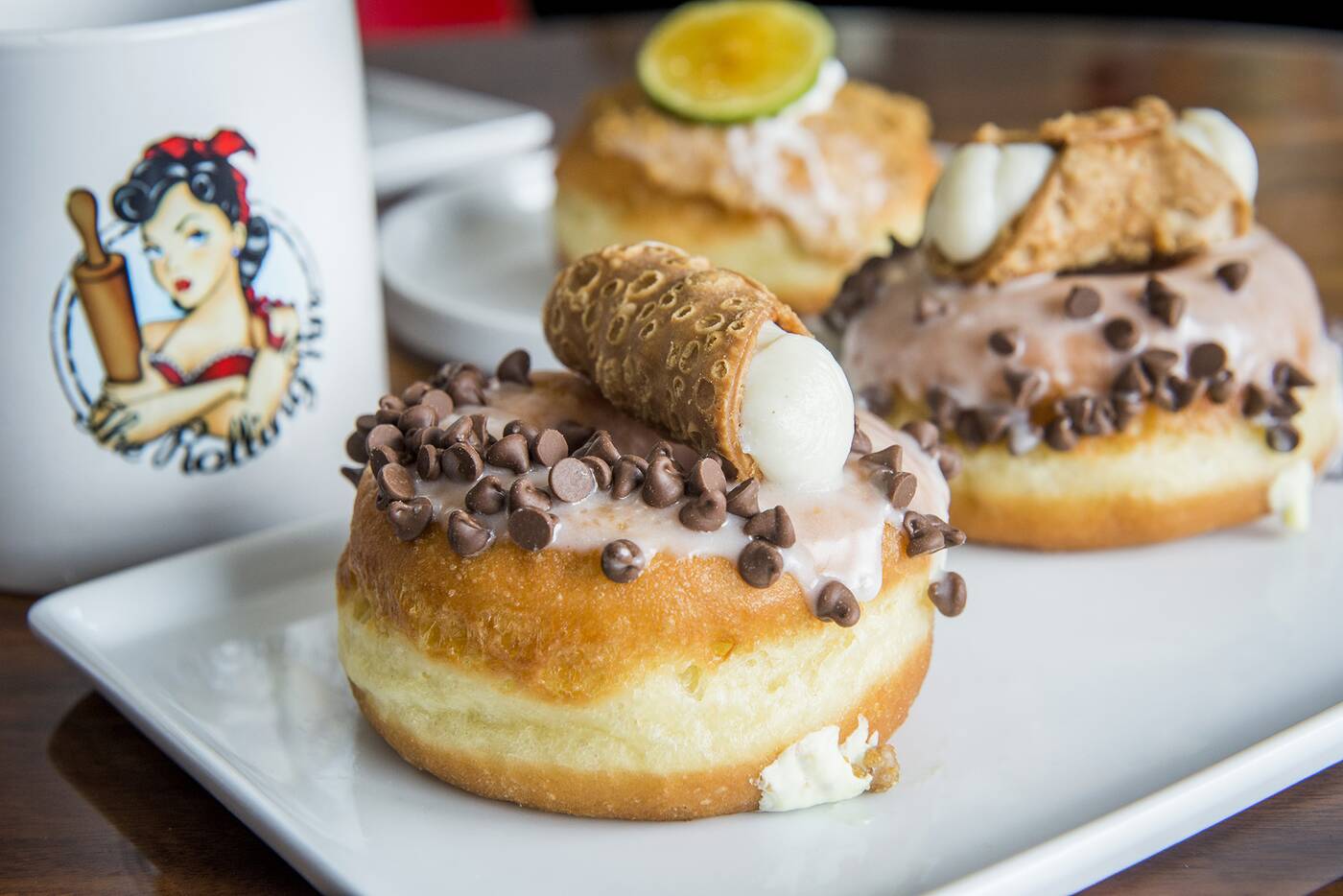 The Rolling Pin takes doughnuts to the next level. Photo by Hector Vasquez.

The doughnuts from The Rolling Pin are nothing short of epic. This popular bakery always has rotating flavours of these baked goods on deck: some days you’ll find marshmallow fluffs, on other days you’ll find ones topped with entire cannolis.

Fancy Franks may be a popular hot dog joint but don't pass up the chance to finish your meal off on a sweet note with they mini doughnuts that come in flavours like cinnamon glazed.

You’ve definitely seen the doughnuts from Fugo all over your Instagram feed. Their boxes of 16 assorted mini sweets are one of the best things to bring to a party. You can’t go wrong with bacon on a doughnut.

The Italian business Rustic Bakery has been around since 1986 and makes an amazing zeppole: deep-fried and custard-filled fritters that are like a way better, flakier, Italian version of a Boston cream.

Cuban sandwiches are obviously what you come for at La Cubana but this menu also includes an order of delicious little buttermilk doughnuts made fresh in-house, whipped cream and caramel sauce on the side, if you aren’t too full. 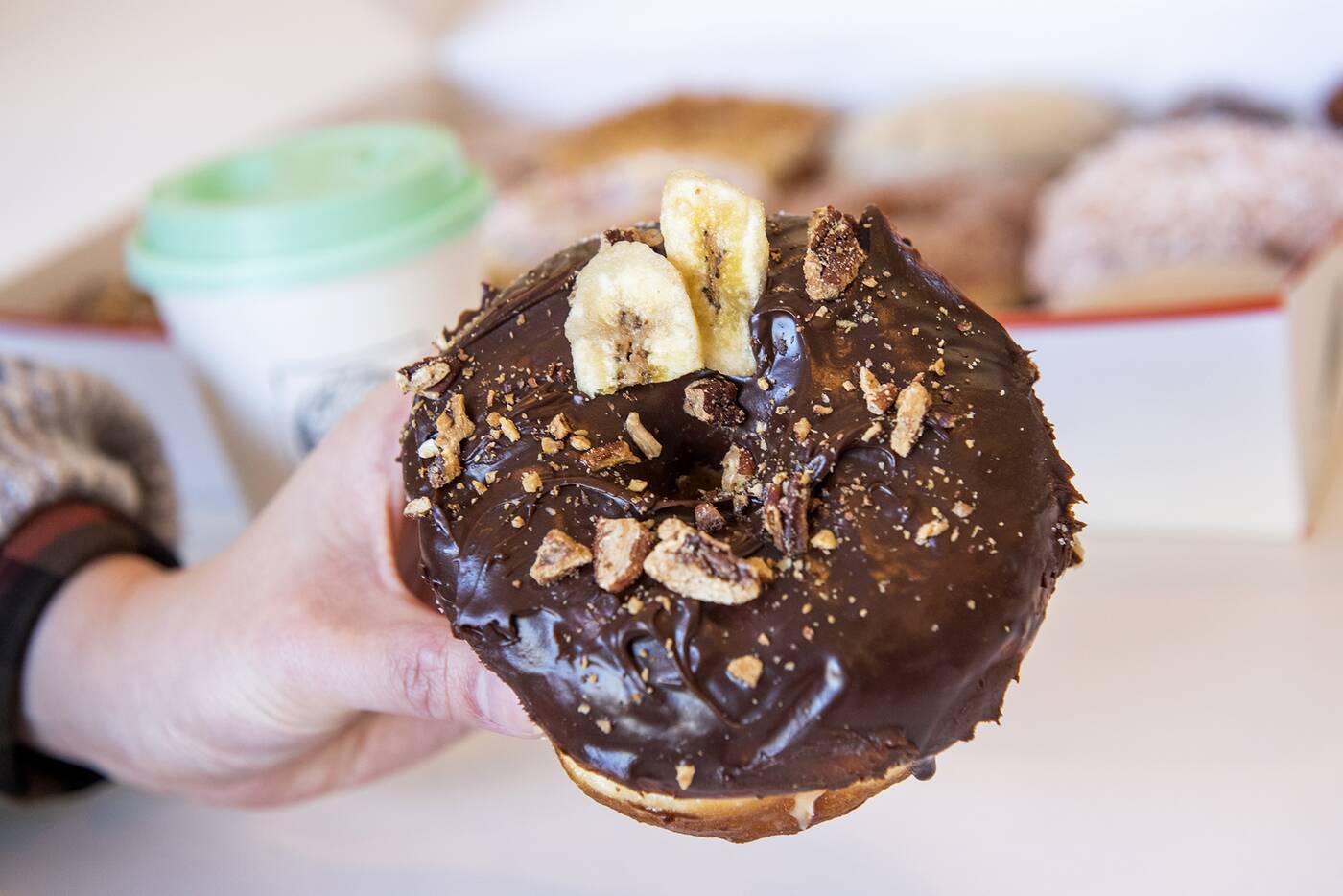 Glory Hole Doughnuts is dishing out some of the best doughnuts in the city. Photo by Hector Vasquez.

Cafe Serano is the counterpart to the popular Pape Village haunt Serano Bakery. The star of this cafe is their loukoumades. You can top these honey-dripped balls of dough with your choice of gelato for a dessert that's bound to get you buzzing off a sugar high.

Glory Hole Doughnuts is known citywide for frying up addictive, inventive doughnuts. Flavours include the Chunky Monkey, which comes covered in chocolate banana glaze and topped with spiced pecans and banana chips.

Bloomer's has been known as one of Toronto's best vegan bakeries and they don't mess around when it comes to doughnuts. They are handmade fresh every day, massive, puffy vegan affairs.

The poofy doughnuts from White Lily Diner rotate regularly, so expect to find their maple pecan dipped goods on some days and salted caramel-filled ones on others. 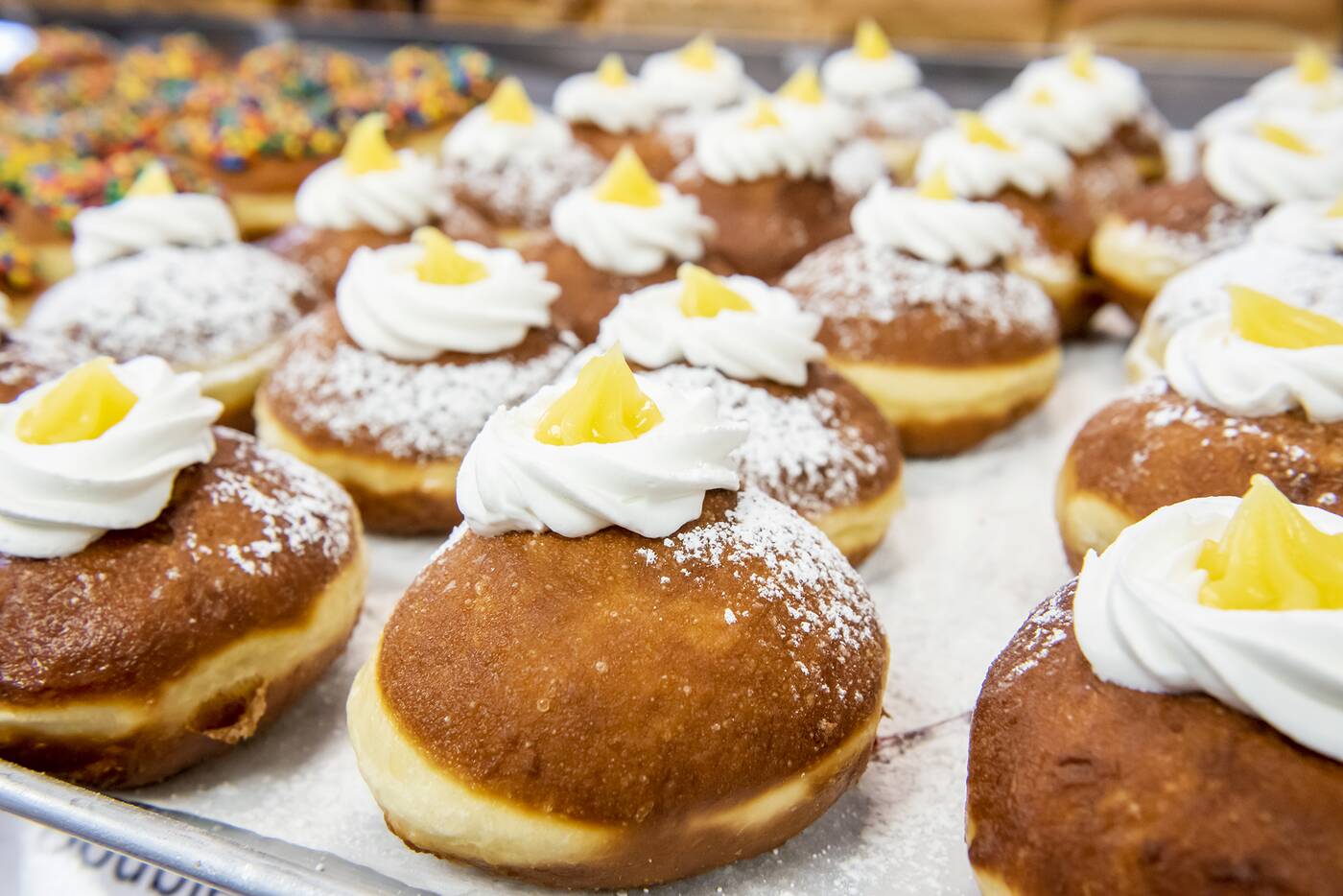 The thing to get at My Zaidy's Bakery is their sufganiyot. Photo by Hector Vasquez.

Benna's Bakery & Deli has everything on their shelves you could ever think about needing and that includes paczki, Polish-style doughnuts.

Everything at the family-run Filipino business Port Union Bakery is made from scratch. Classic flavours like sprinkled chocolate and cinnamon twists will remind you of Timmies, but way better because they’re homemade.

My Zaidy’s Bakery is one of the oldest Jewish bakeries in Toronto. They're known for whipping up challah, latkes, and their most popular treat: sufganiyot, a jelly doughnut traditionally eaten during Hanukkah.

They’re not doughnuts, they’re bombolone: the soft and light Italian varieties sold at Sud Forno that are sprinkled with sugar and filled with their version of Nutella or a rich crema.

Padaria is a Brazilian-style bakery that makes sweet and savoury items from scratch throughout the day. Among the sweet treats are Brazilian-style doughnuts which are essentially deep-fried bread rolls cut in half and filled with pastry cream.