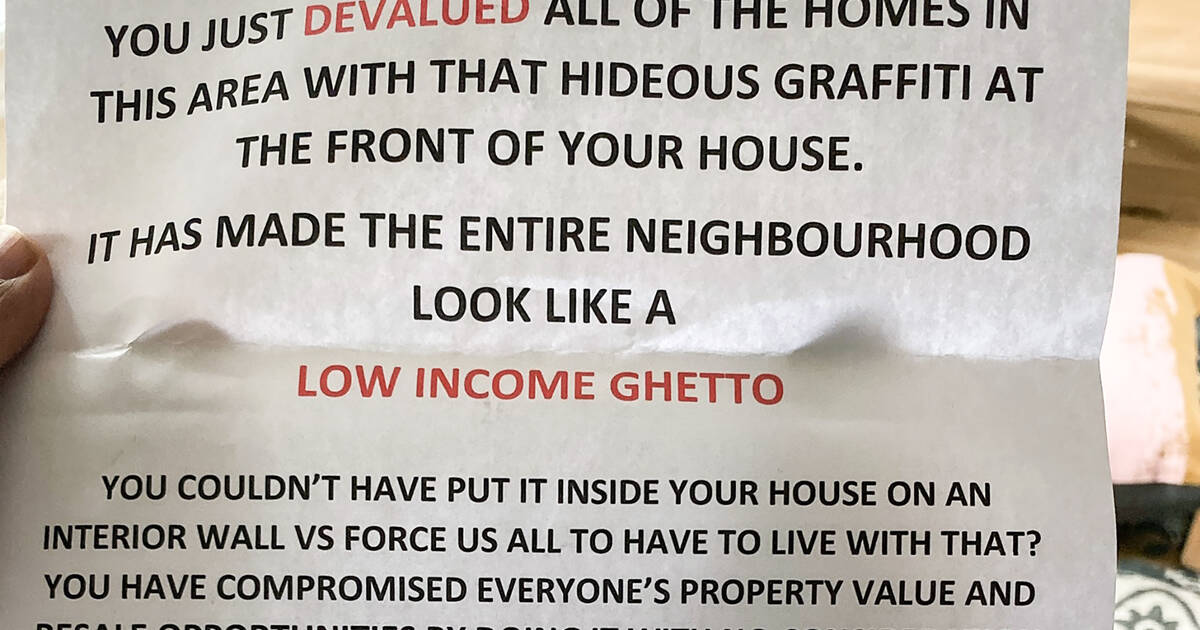 Is there any worse kind of neighbour than a bored, self-righteous busybody who dishes out passive-aggressive notes? And anonymously, at that?

The answer is yes: A racist one.

People all over the world are currently rallying in support of a Toronto family who received such a note after having a simple, nature-inspired mural painted on the garage door of their townhome.

Sapna Shah, who lives in South Etobicoke, shared an image of the hateful letter in a local Facebook group earlier this week, panning the author as "small minded, racist" and "elitist."

"To the brave soul who wrote mailed this nasty message to my family and me! It's been a few days since my 6 yr old asked me why someone wrote such a hateful letter to us," she wrote in the caption of the post.

"All I could say is that you are someone who probably needs love in their life and isn't getting it," she continued.

"We wondered why something so insignificant as painting our garage door would cause you so much anger that you took time from your life to type and mail such hateful words to our family. Then realized you weren't worth our time."

The mural, commissioned by a local artist, shows some rolling golden fields with a moon and some constellations in the night sky. 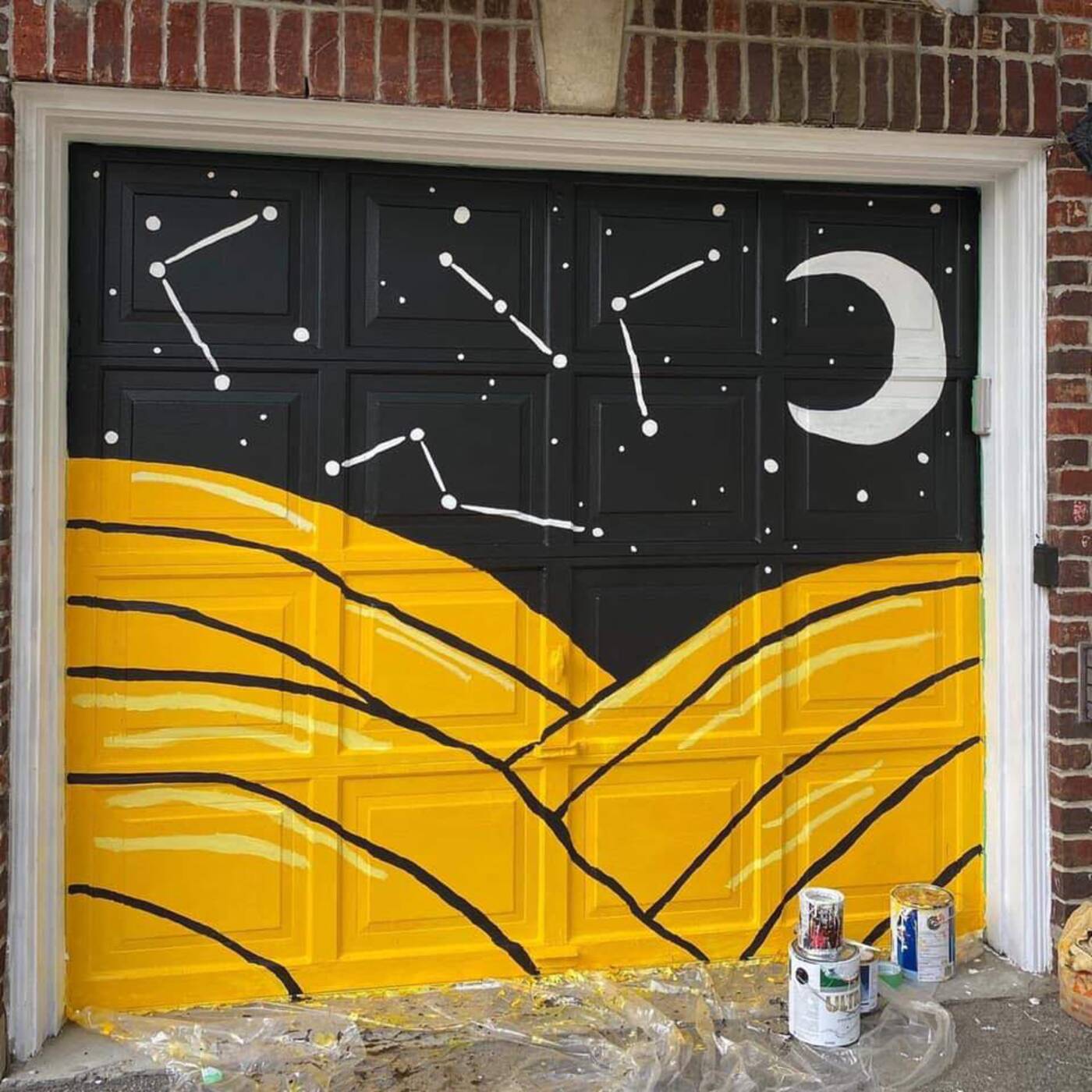 This mural on the garage of a west-Toronto townhome prompted a vicious letter from an anonymous neighbour. Image via soundguy/Imgur.

The letter Shah received, typed out on white paper in all caps with a mixture of black and red ink, states that Shah brought down property values and resale opportunities for her neighbours by having the mural painted "with no consideration for anyone but your tasteless self."

"You just devalued all of the homes in this area with that hideous graffiti at the front of your house," it reads. "It has made the entire neighbourhood look like a low income ghetto."

"Every visitor we have will now have to drive by that shit on the way to us like they’re driving through the hood. Shame on you! You have no class!"

Shah told toronto.com this week that the letter was addressed simply to "GHETTO GARAGE DOOR" and that she felt angry, hurt and scared after finding it in her mailbox.

"There's so many undertones of racism, elitism, and classism," she said of the note. "We're a brown family. How dare you say 'low-income ghetto' to anyone, let alone a brown family... I think we were targeted because we're brown."

The mother-of-two decided to share the letter online with a message for the sender in an attempt to fight back against what she said was a kind of bigotry she'd never dealt with before.

"The irony of the matter is that I actually grew up in a 'low income ghetto' of south Harlem in NYC, and there is where we found more class, humility and sense of community than you have displayed in your wonderful words!" she wrote in the caption of her Facebook post.

"The only person who is bringing the 'value of your property down' is actually YOU! With your small minded, racist, elitist words. My kids and I feel sorry for you. Peace!" 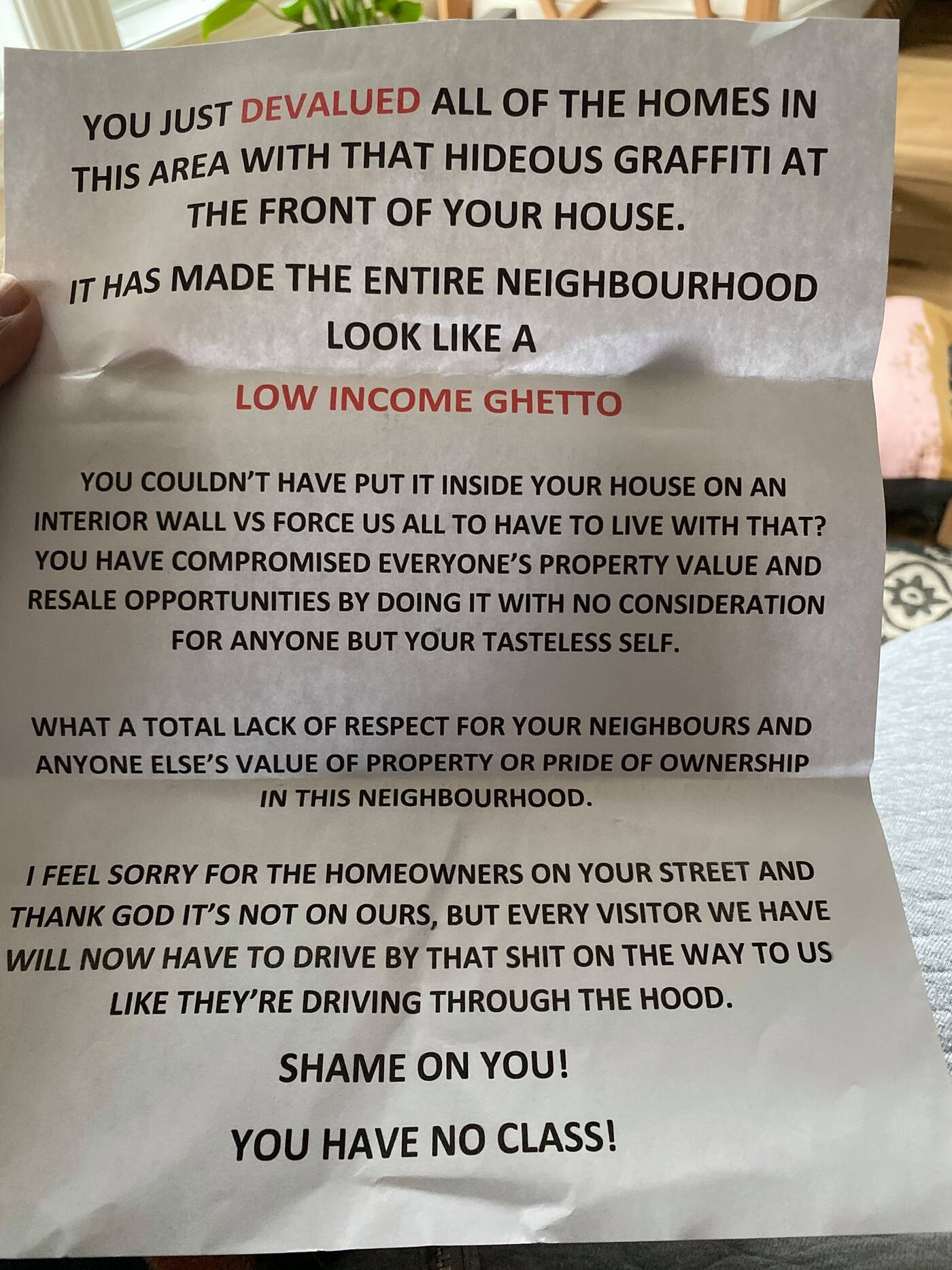 Sapna Shah received a hateful letter with clear racial undertones after commissioning a local artist to paint a mural on her garage door. Image via Sapna C. Shah.

Members of the South Etobicoke Community Group were quick to reply to Shah's post with messages of support for her family and disdain for the note sender's actions.

"So ridiculous that this ignorant bigoted person is so uneducated as to think that this artwork would in any way decrease property values in this neighbourhood. I am sorry that this person has made you feel unsafe in your own home," reads one of nearly 600 comments on the original post.

"I actually think you should file a police report in case any further events happen as that person clearly has problems."

"You should put a big sign in the front of your house 'support the mural' and everyone can come by the sign it," wrote another. "Show that nasty person that they're alone in their feelings."

Earlier this week, a community member re-posted the letter and the mural that inspired it to Imgur, where the story has since blown up. More than 1,000 people have now commented on the Imgur post to either praise the mural, condemn the letter's author, or point out that stars don't appear in the sky when a crescent moon is present.

"Property values are one of the places racism hides in plain sight," pointed out one Imgur user.

"Painting that letter on plywood and posting it in the yard, now that would lower property value!" joked another. "No one likes neighbors that act like that."