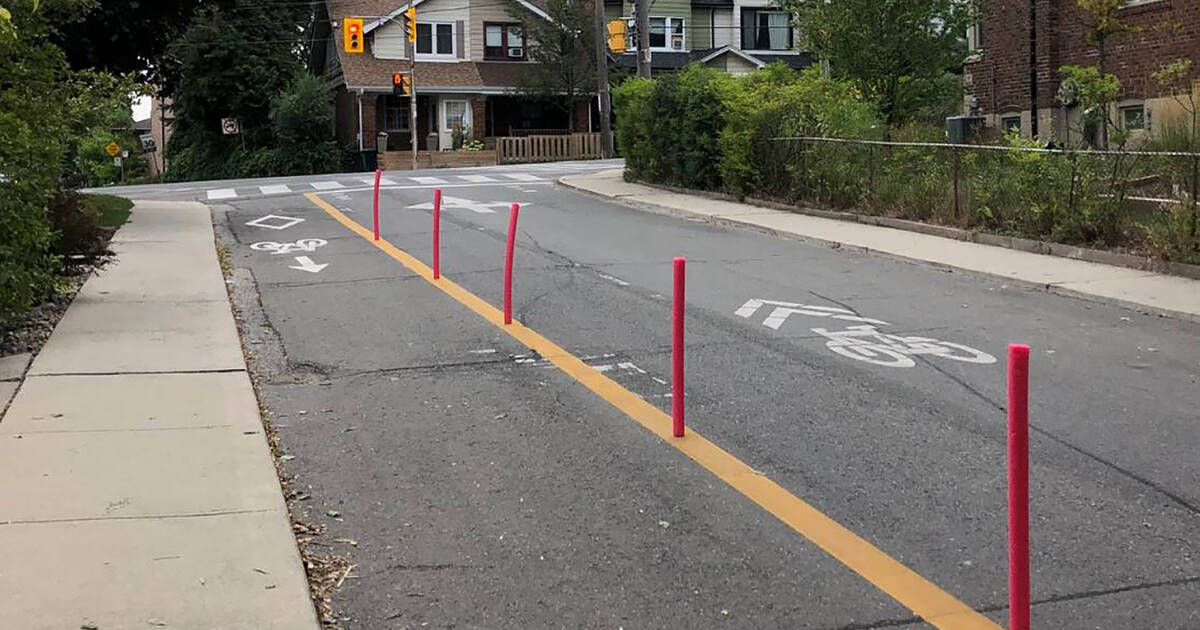 A lack of action from the city has forced yet another Toronto resident to get creative in the name of road safety — this time (but somehow not for the first time) using standard pool noodles.

Mike, a father of three young boys who lives in Toronto's Upper Beach neighbourhood, explained on Thursday that he's been trying for five months to get some sort of help from the city with an increasingly common problem on his one-way street: People driving in the wrong direction.

After watching nine cars drive the wrong way within just two hours in front of his home on Wednesday, he decided to do something that would, at the very least, alert unaware motorists to the fact that they're in the wrong.

"The street is narrow," said Mike by phone of Corley Avenue. "If cars go the wrong way, they actually ride up along the sidewalk... the other day, a car going the wrong way came within maybe five feet of a child playing in front of a neighbour's house."

One car did in fact strike a pedestrian in June at the corner of Corley and Woodbine Avenues, steps from where Mike's pool noodles have been glued to the ground.

The Upper Beaches resident says he's always known that the issue has been a problem, but he didn't realize how bad it was until he started working from home during the pandemic and saw cars speeding the wrong way down his street every single day.

Months more of back and forth resulted in Councillor Brad Bradford's office telling Mike that, essentially, they'd done everything they could.

"We have taken action to engage city staff to review signage and markings on your street, communicated to the Toronto Police services your concern for drivers entering the wrong way with a request for enforcement and logged a request for Transportation Services staff (still suspended) to investigate any and all safety options available upon returning to normal operations," reads an email from the councillor's team.

"Unfortunately, Corley meets all signage, markings and safety guidelines and due to the pandemic, our ability for more comprehensive action is thwarted by suspended departments and reassigned staff."

Bradford's office asked for patience and promised to push for a solution once operations resume in full, but with some 15 young children living in the immediate area and hundreds more set to attend nearby Norway Public School when classes resume next week, Mike isn't keen on waiting.

He glued five hard foam noodles in the middle of the street between traffic and a southern bike lane. One was knocked over within "five to ten minutes" of being erected.

"I'm not expecting it to be effective," said Mike of the pool noodles, noting that actual bollards would be more appropriate. "It's obviously not a long term solution — I'm just so frustrated with this entire issue and nobody doing anything."

While he understands the risks of living downtown, Mike says he and his neighbours find the amount of dangerous driving on their street excessive, and they worry that someone could be seriously injured.

He's certainly not the first to approach this kind of problem in an unconventional way. In 2017, someone fixed up a dangerous Regal Heights intersection using only leaves and chalk.

And then, of course, there is the case of handyman Adi Astl, who built his own actual staircase in Tom Riley Park when the city failed to deliver one. The city eventually tore down those steps with the promise of building new ones for more than ten times the price.