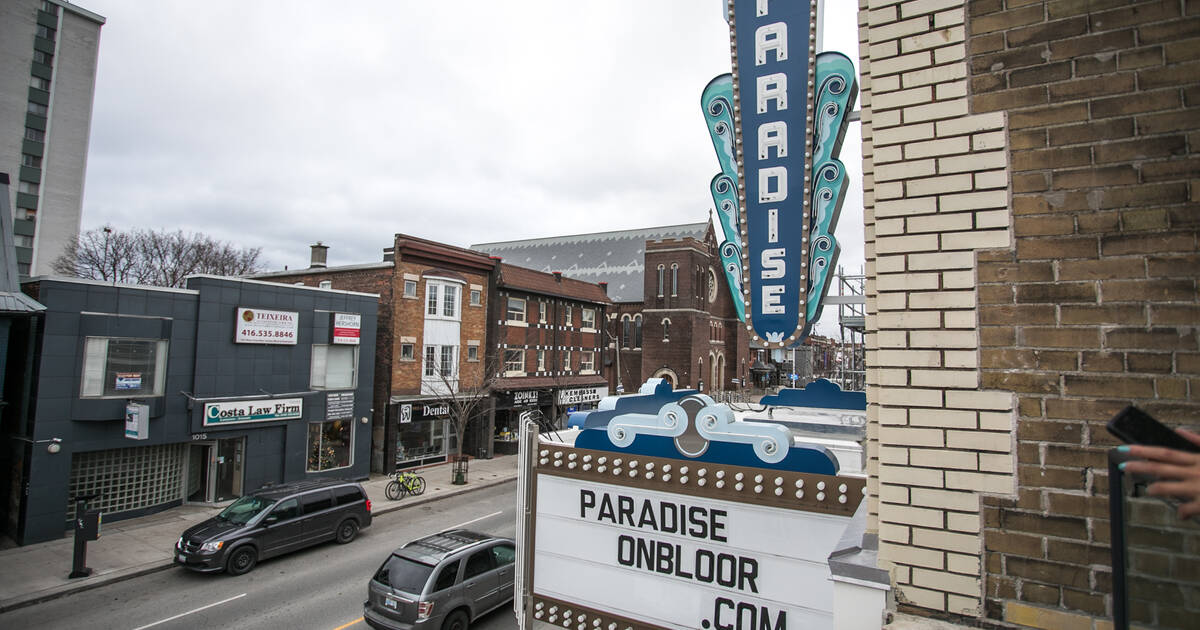 The Paradise Theatre has reopened its doors at last.

Thirteen years since closing for major renovations, the theatre's iconic cascading sign (a remake of the original 1930s version, by the same folks who made El Mocambo's palms) are lighting up Bloor street once more. 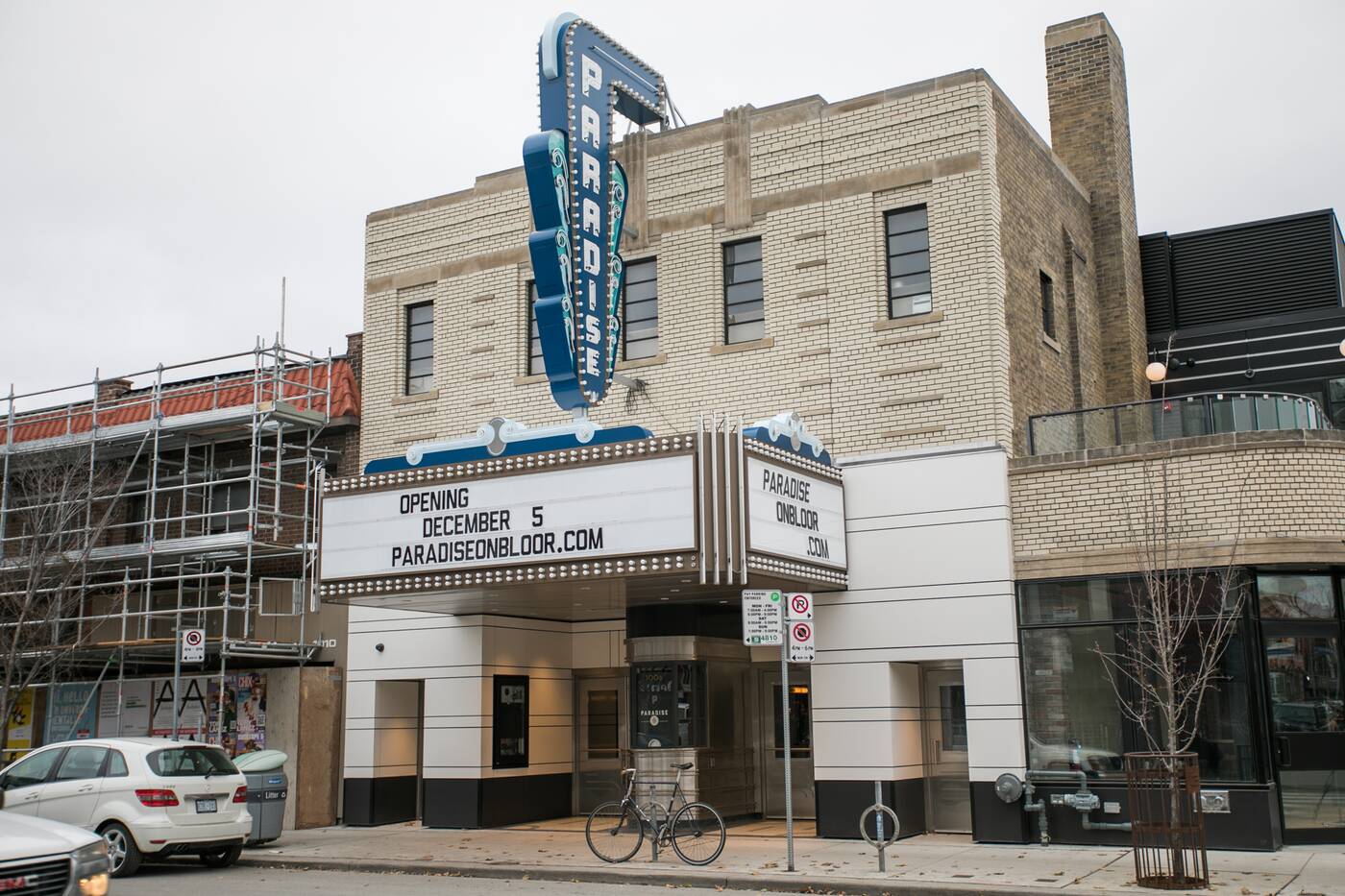 Paradise Theatre opens officially to the public on December 5.

The historic art deco theatre opens officially to the public on December 5 with the first of four Jason Collett-led Basement Revue concerts, but you should be able to catch a glimpse of the revamped interior outside of showtimes. 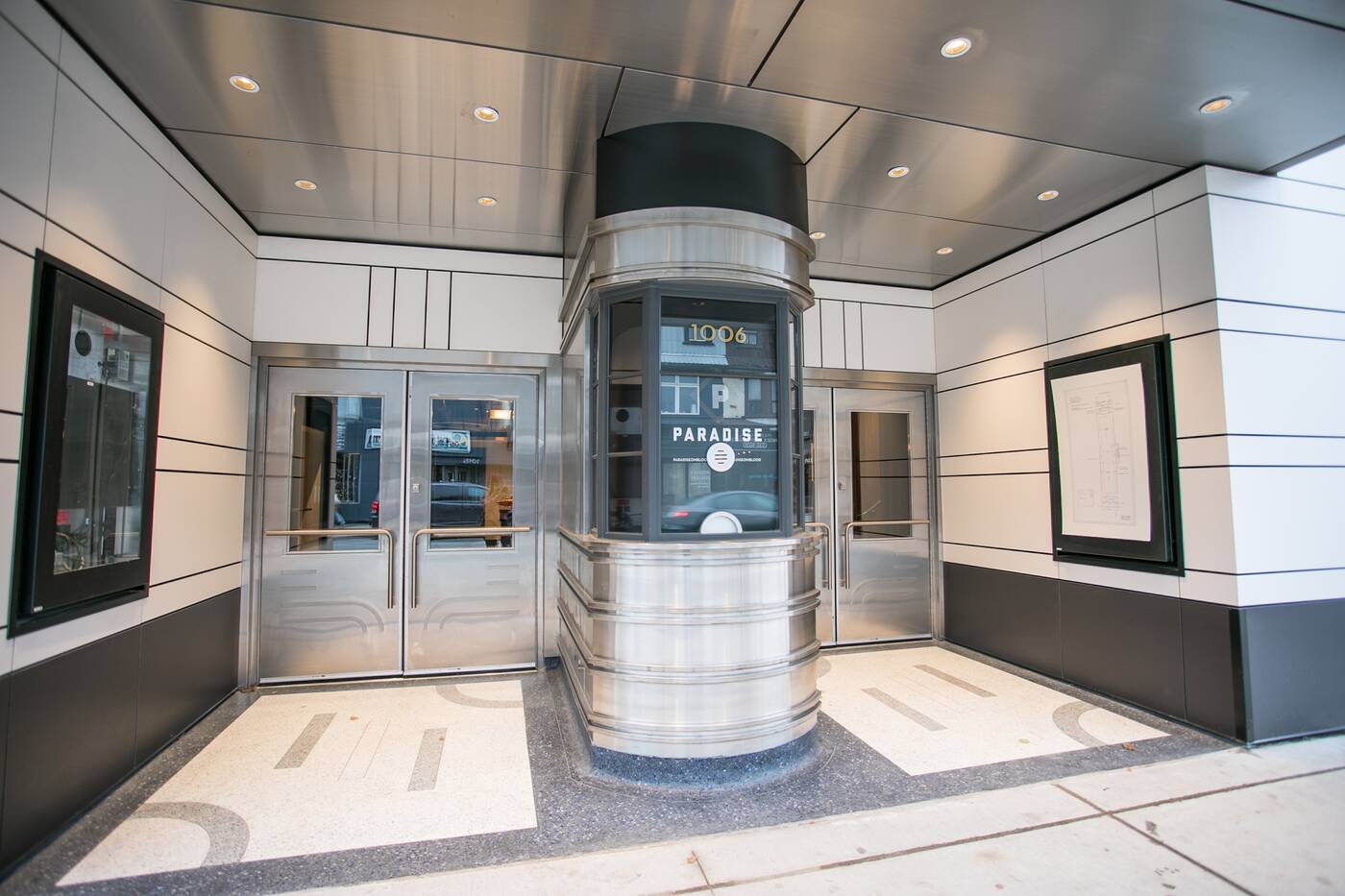 Movie-goers will buy their tickets from the old-school ticket booth out front.

There's a chance you never even got to see the old Paradise before it closed in 2006, but it's safe to say the space has gotten a big upgrade courtesy of ERA Architects, Solid Design, and Ware Malcombe. 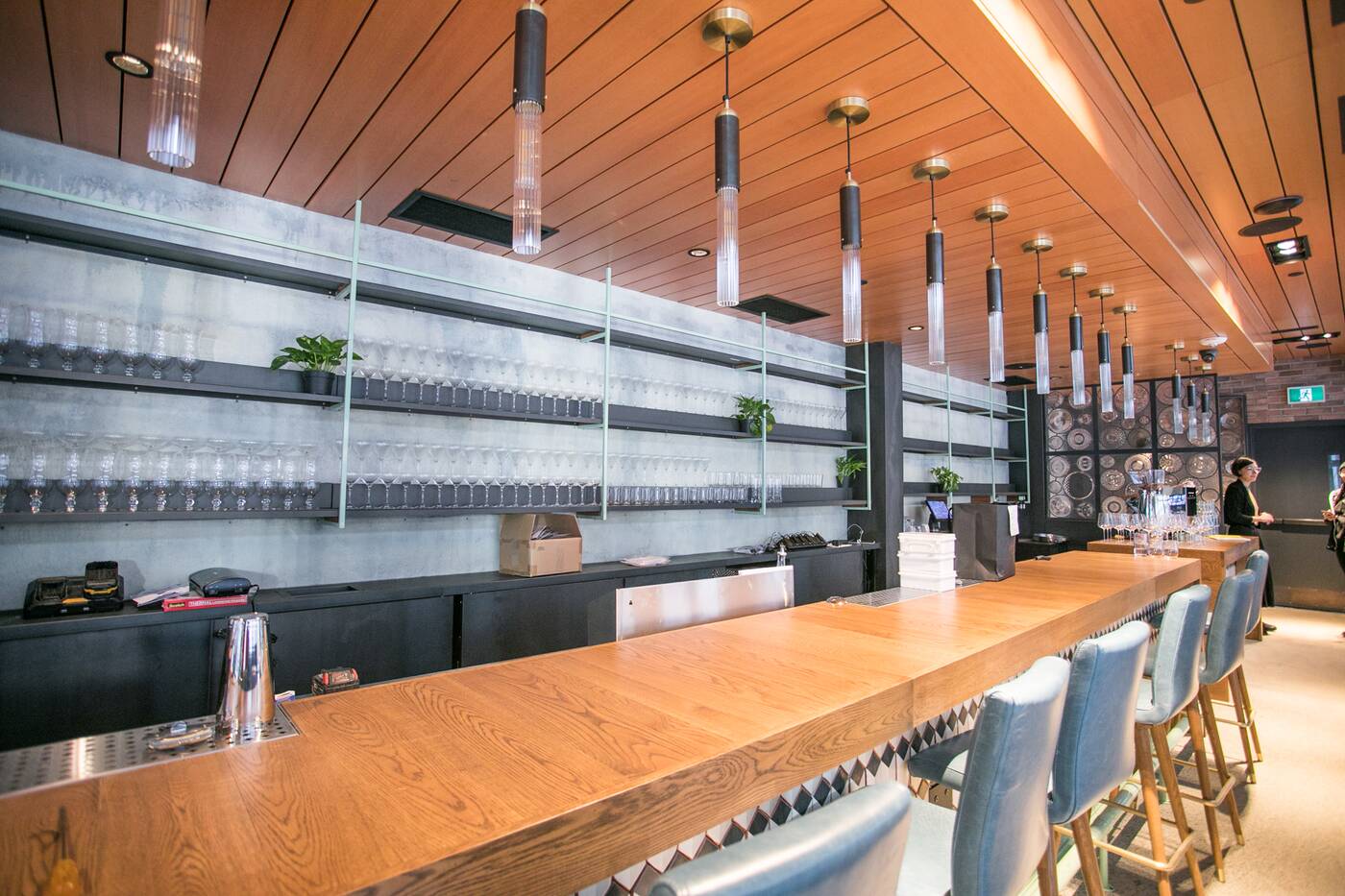 The restaurant Osteria Rialto won't be open until 2020.

Glimmering gold accents, scalloped bricks, and a catalogue of wall tiles so beautiful it has its own hashtag: #TilesOfParadise, harken back to the theatre's Art Deco past with design that's both old-timey and modern. 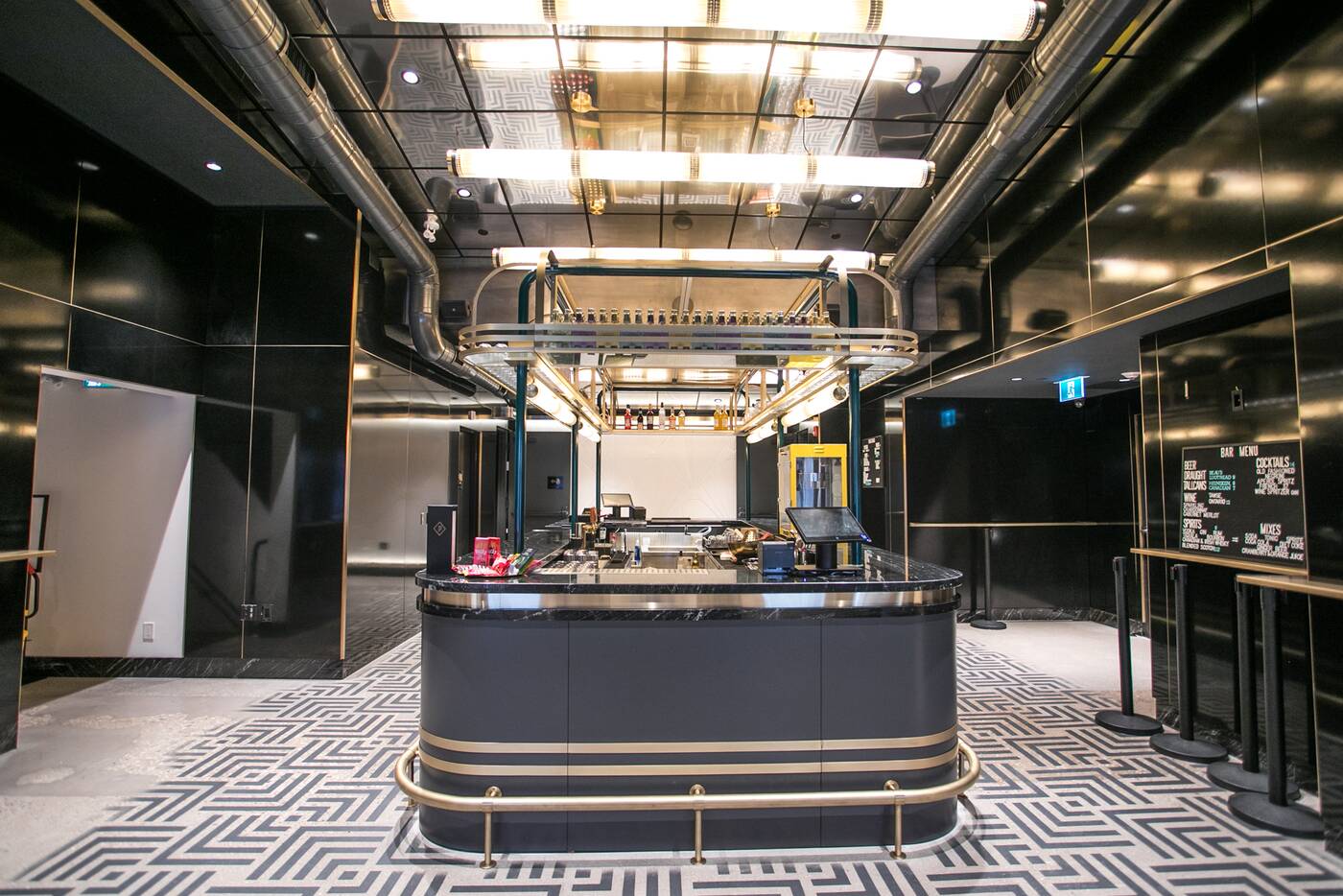 The gold and green circular lobby bar is inspired by old-school TTC streetcars.

Buy your ticket — standard tickets are $14 — from the outside-facing booth. Anchoring the main lobby is the circular green-and-gold bar, apparently inspired by old TTC streetcars, which sells pre-show draught beer and wine. 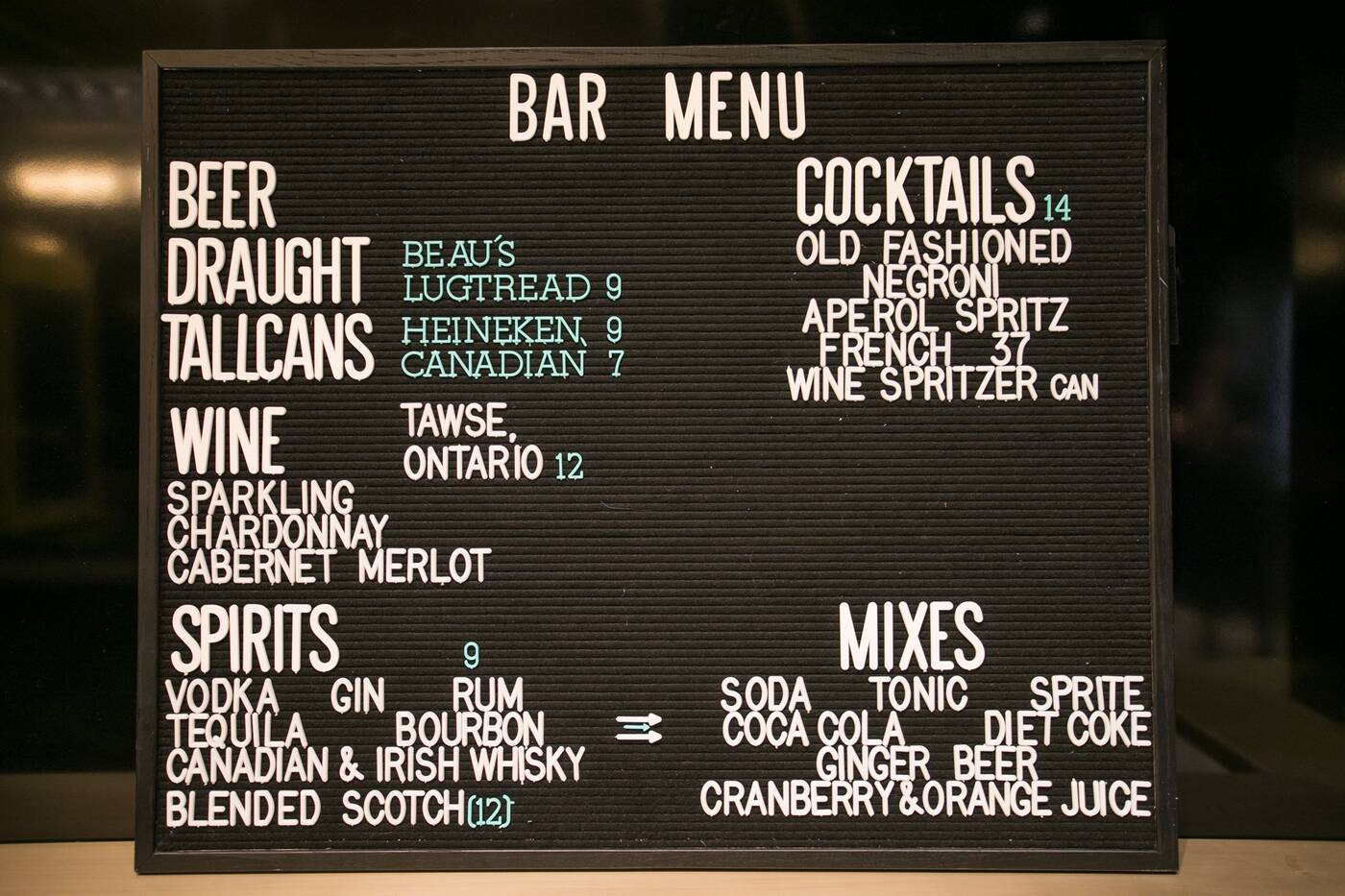 You'll be able to buy draught beer, cocktails, spirits, and snacks from the bar.

Cocktails ($14) include a handful of classic Italian aperitivos like negronis and aperol spritzes, which aside from being a great start to the evening, can also be interpreted as a nice ode to Paradise's 30-year run as an Italian filmhouse from the 1960s to 90s. 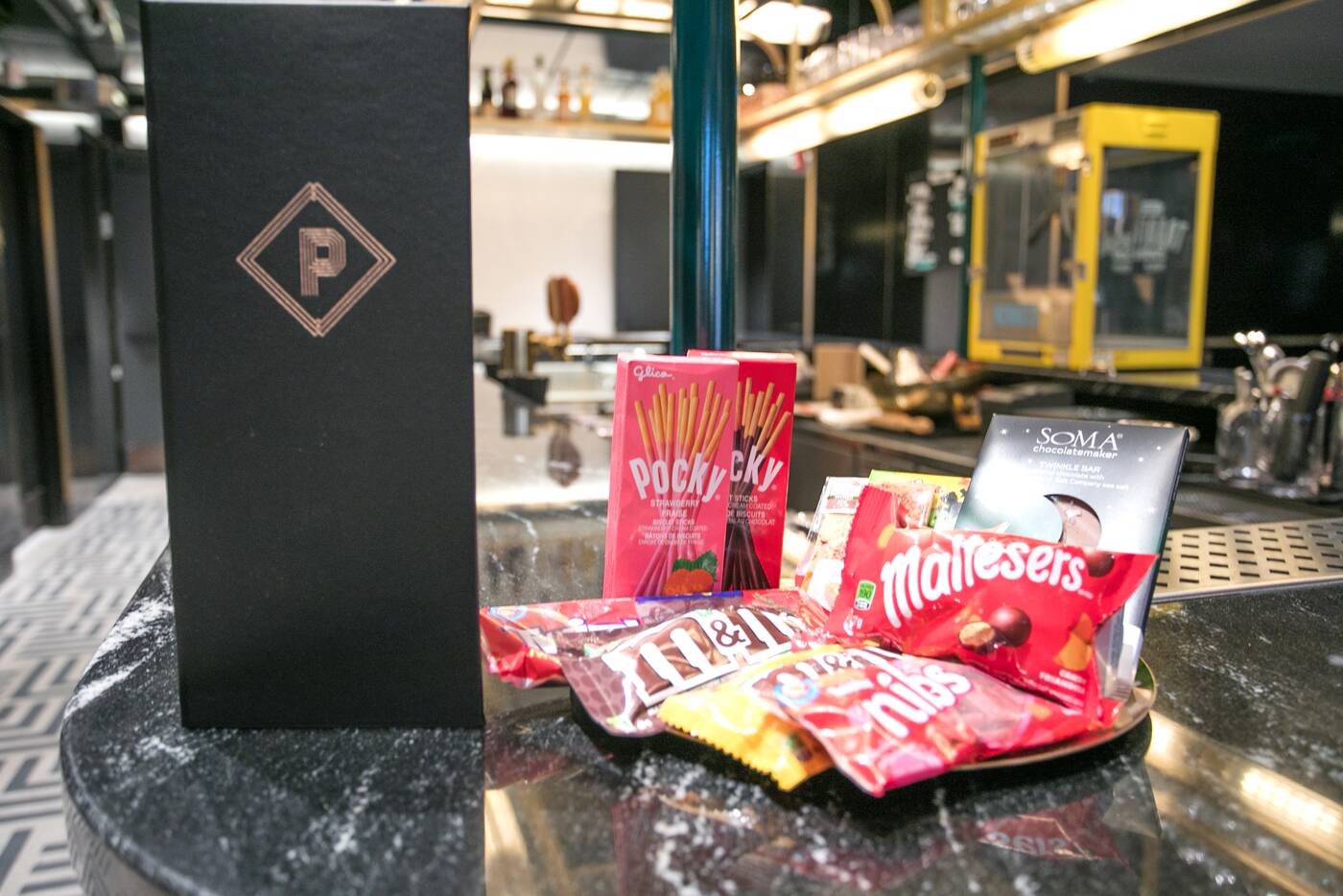 It should be noted that the availability of Pocky and Soma chocolate take this concession stand to the next level. 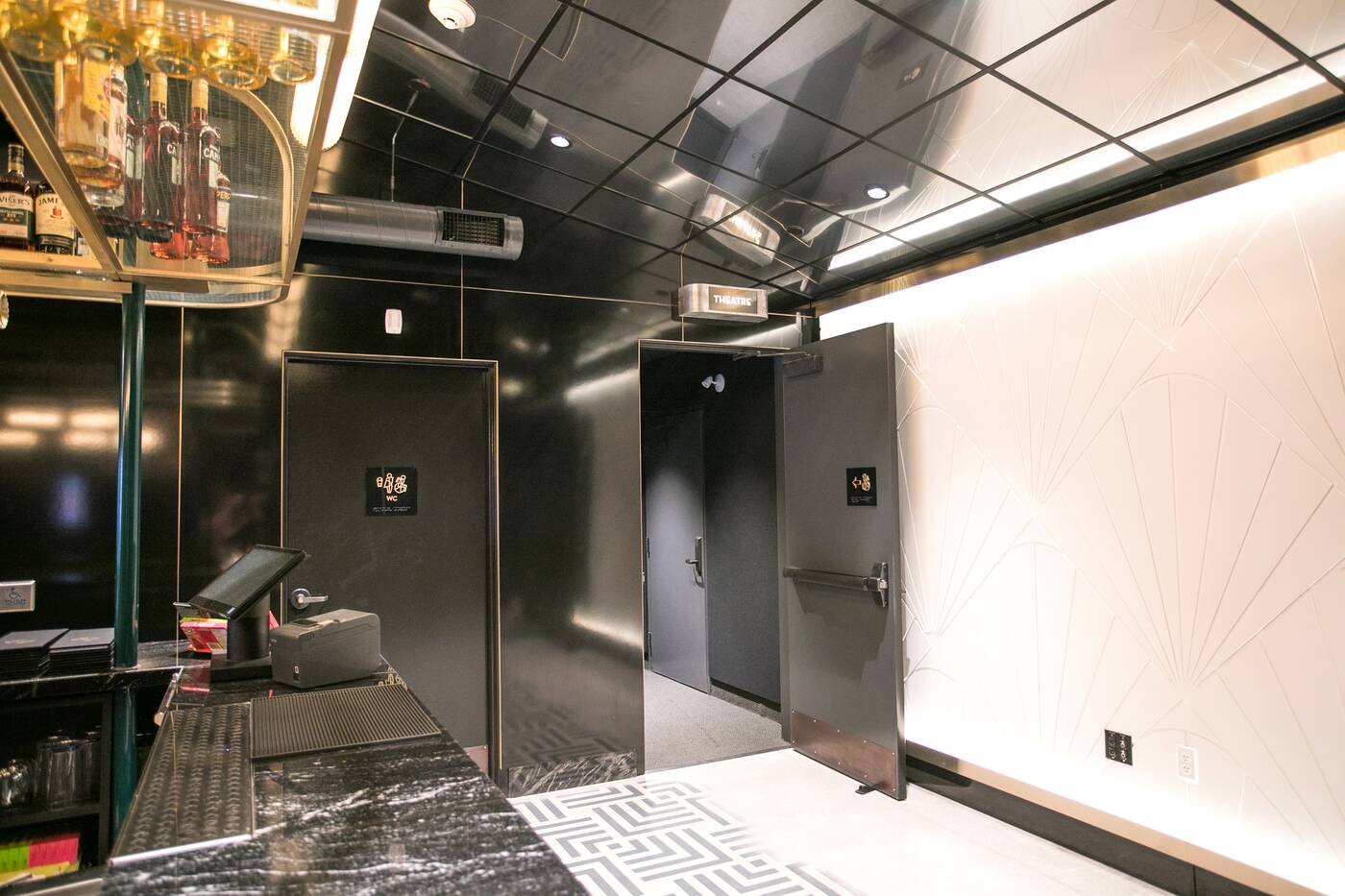 The space is designed to be fully accessible.

The entire space is also completely accessible for the seeing impaired: Paradise worked with the Canadian Institute For The Blind to install Bluetooth wall beacons throughout the space, which allow people to manouevre Paradise in tandem with a handy app called BlindSquare. 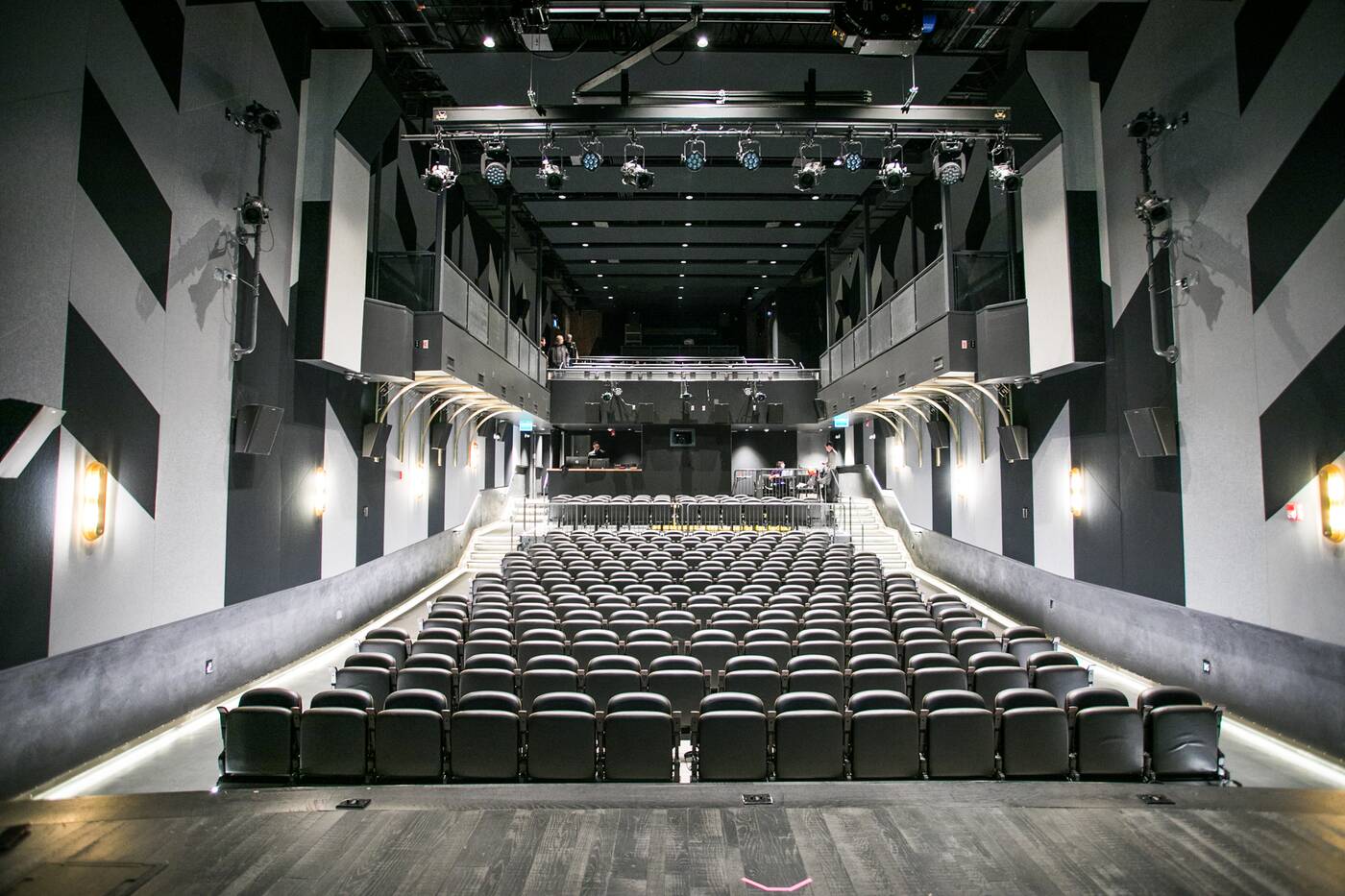 The theatre is lined with sound paneling and gold light fixtures.

The theatre itself has two levels, seating 106 on the ground floor with cushy seats and generous leg room. Most shows come with assigned seating, so there's no mad dash for the sweet seats before the lights go down. 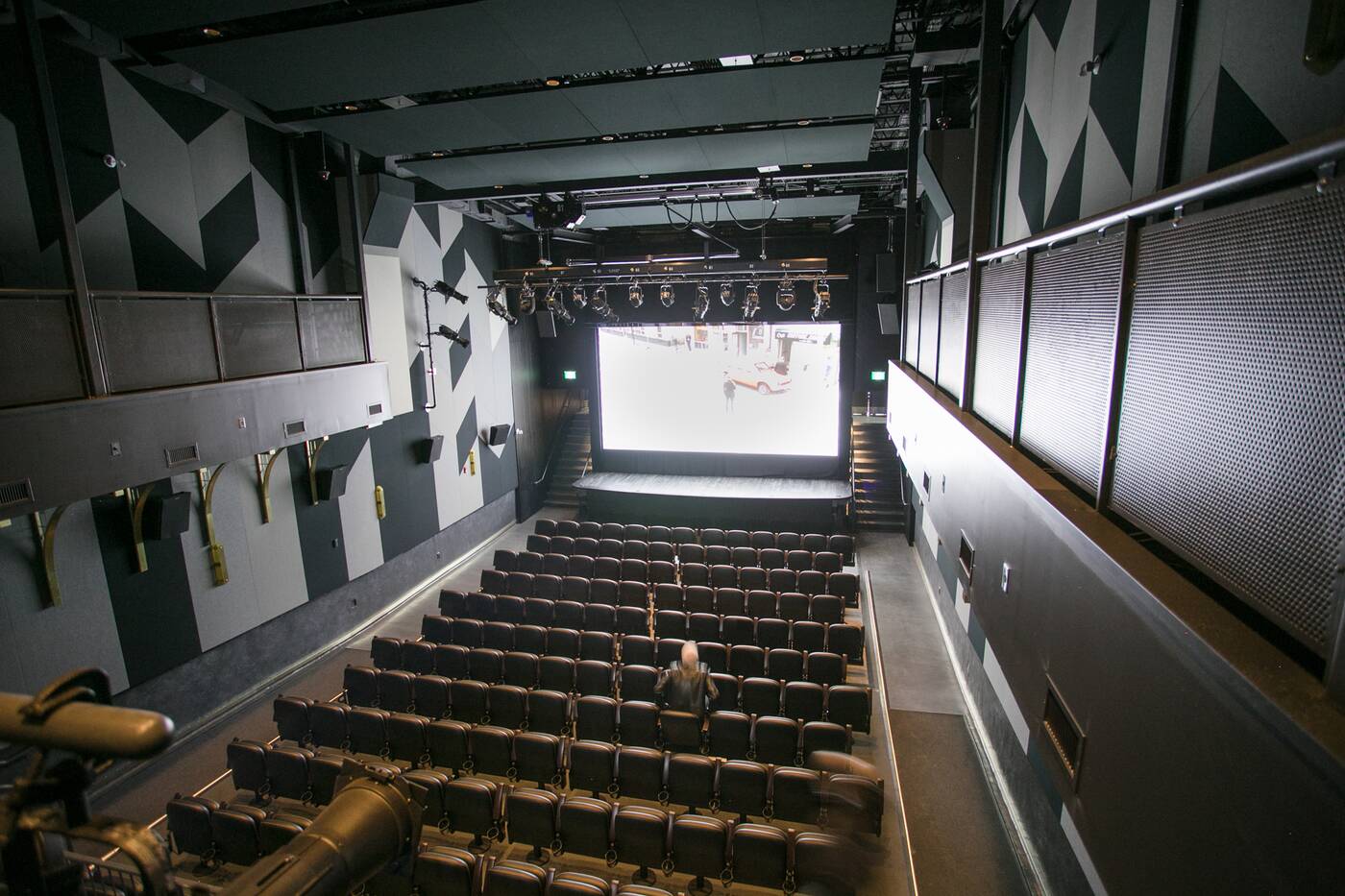 Paradise has a film program that includes recurring monthly series and popular films.

The retractable cinema screen stretches 27 feet-wide, with a smaller screen behind it for lectures and live talks. 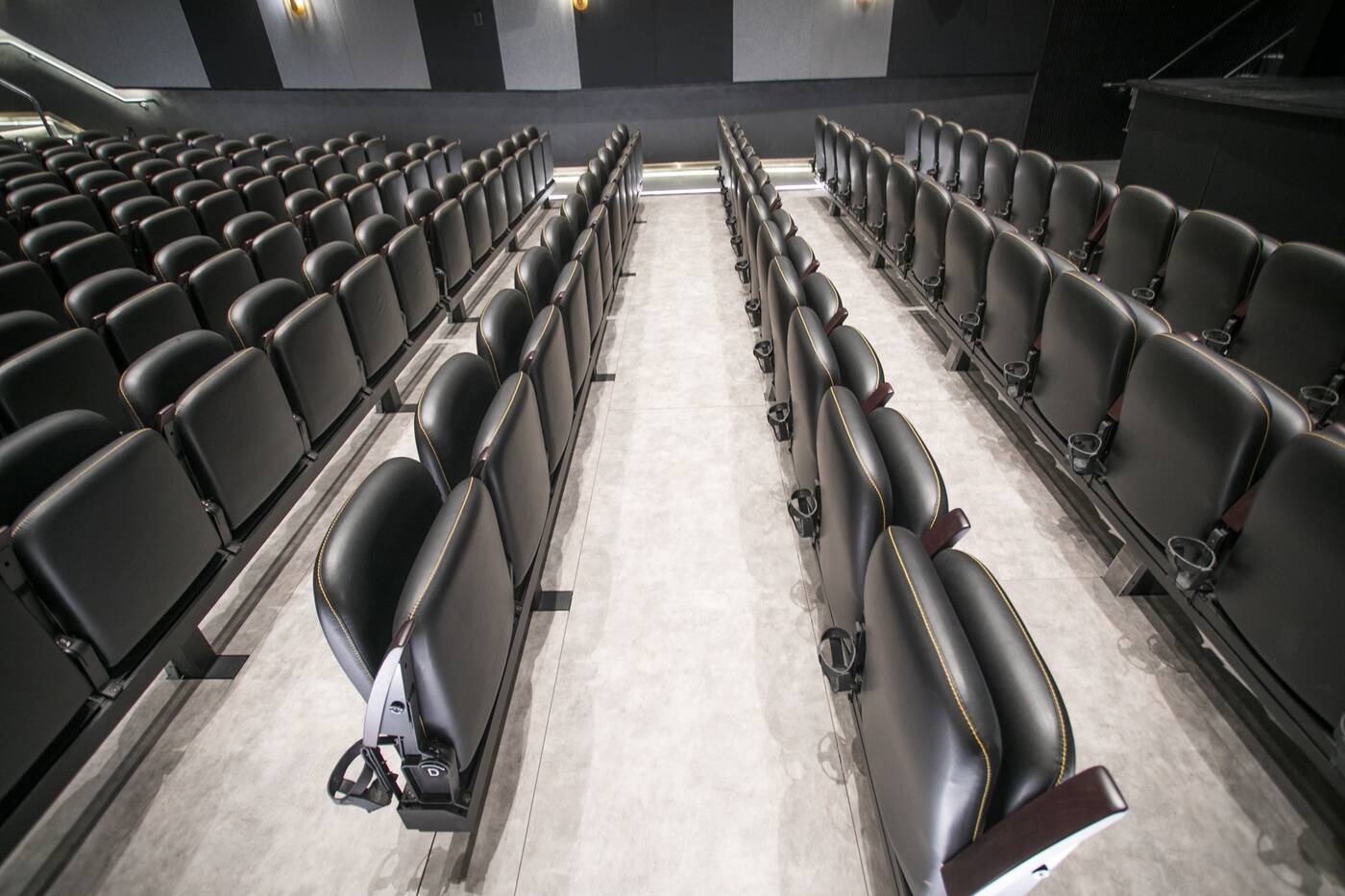 The first five rows of seating can be retracted to create an open floor for seating and standing room.

The first five rows actually retract down to create an open floor, which is extra convenient for events like Babes in Paradise, a weekly screening that lets exhausted parents sprawl out on the ground with their toddlers, and even change them on the spot. 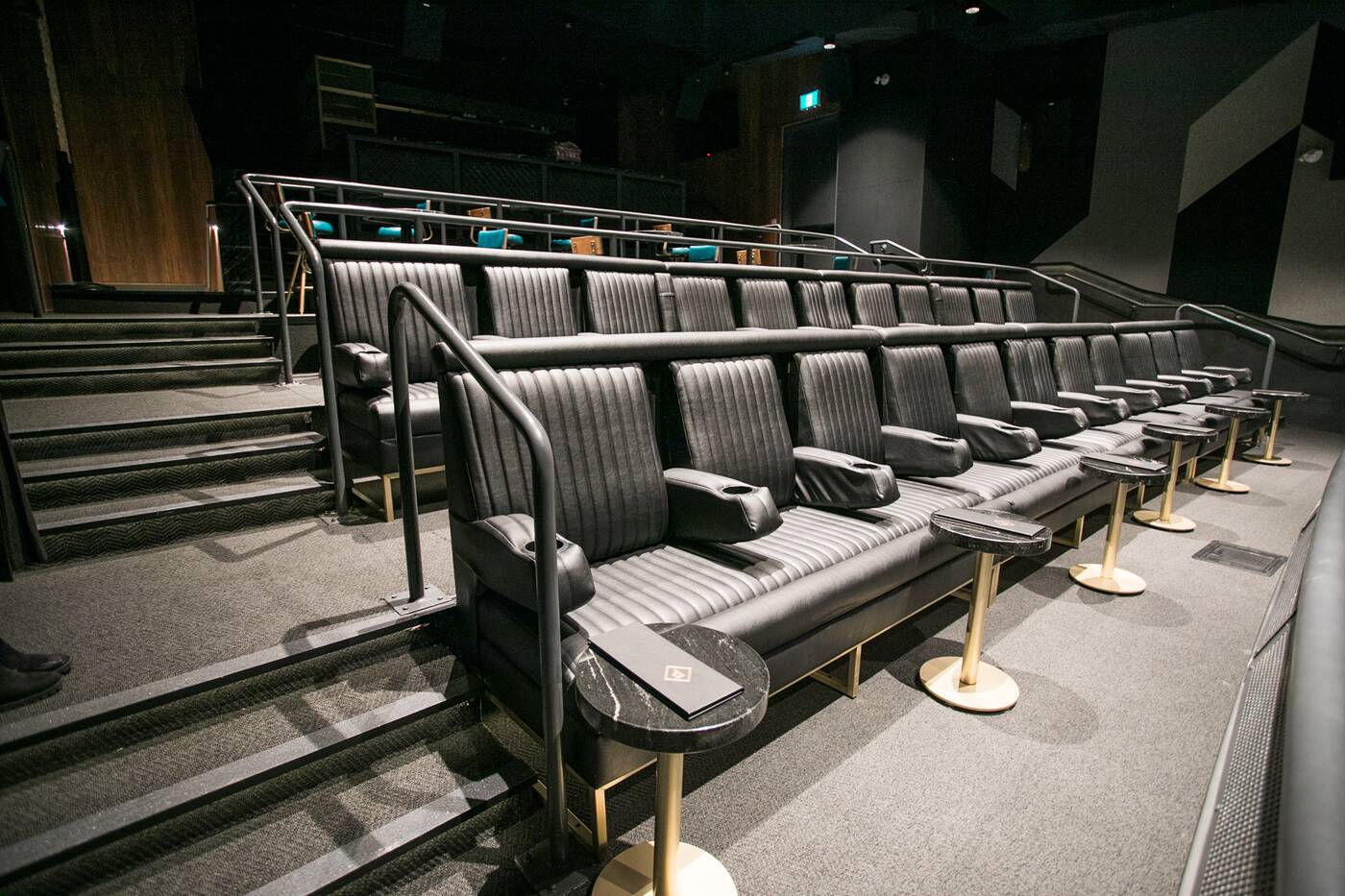 Guests will be able to dine VIP Cineplex-style in the balcony seats.

Up on the balcony, you'll find 22 seats for inseat dining, a bar, and a few high tops with teal seating, for a more bevvy-focused experience. It's an extra $5 to sit up here, with tickets sold for $19. 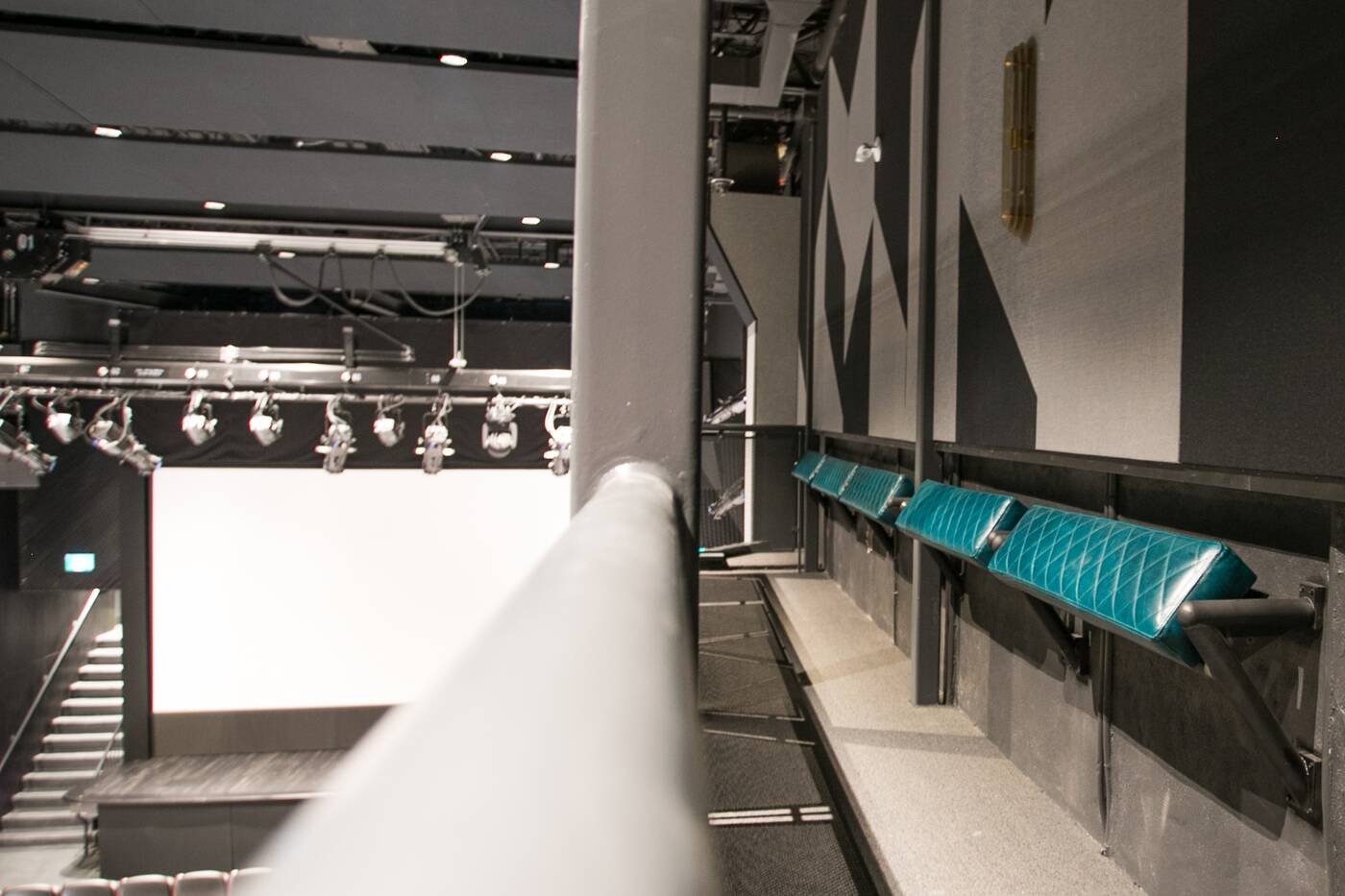 There's extra standing room at the sides of the balcony too.

There are also some really teal standing seats lining the walls of the upper floor, akin to the ones on the TTC or GO trains. 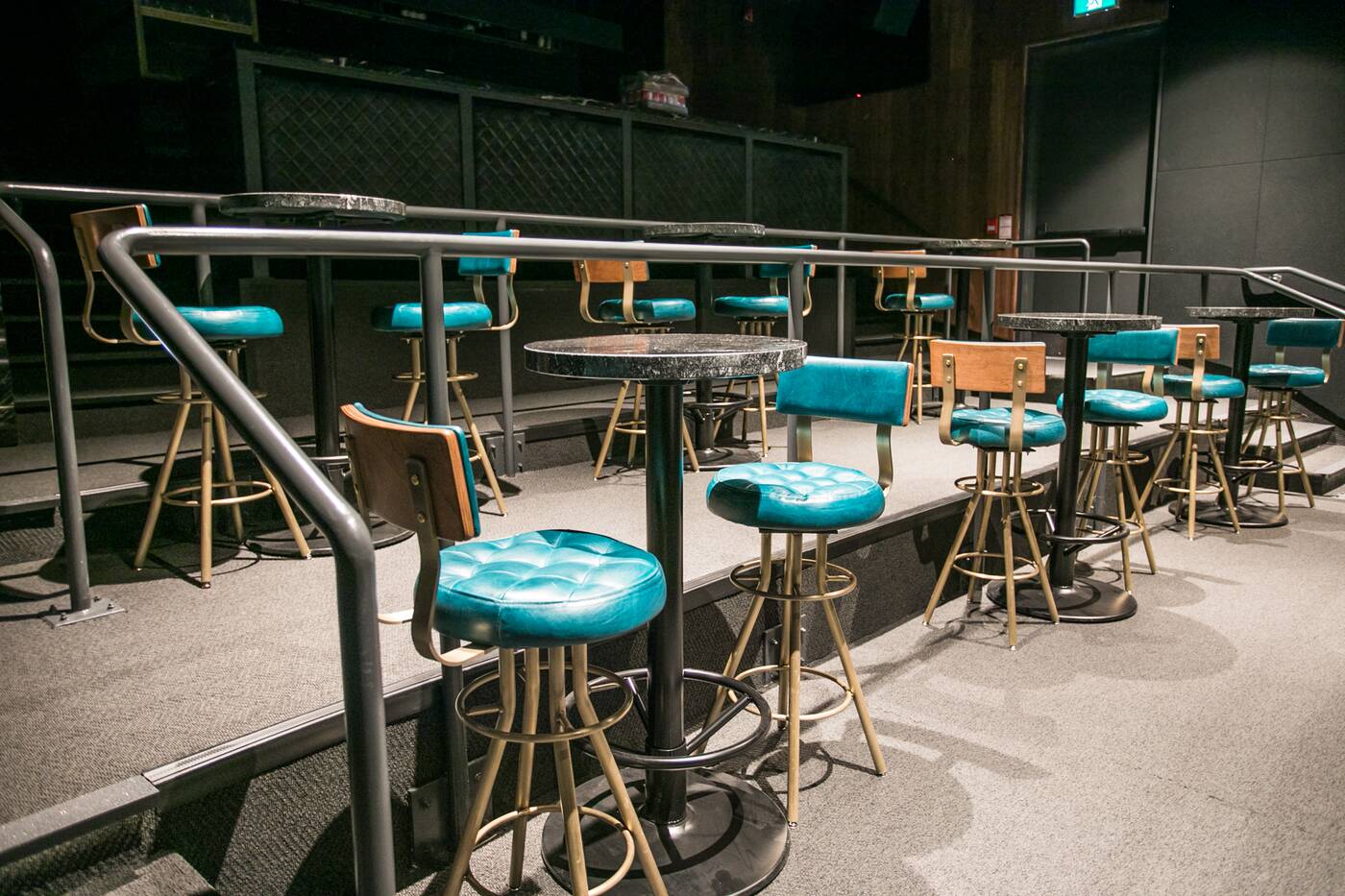 There's a bar upstairs and high-top seating for a more laidback viewing experience.

While popular films will certainly have their moment here, don't wait on any Marvel flicks. Expect an eclectic program of recurring series that highlight women filmmakers in support of Sistering, or let local artists redesign their favourite movie posters.

Neither the first-floor restaurant Osteria Rialto—the Basilio Pesce-helmed eatery, named after a grocery store which once occupied the space—nor the upper-floor Bar Biltmore will be open until 2020. 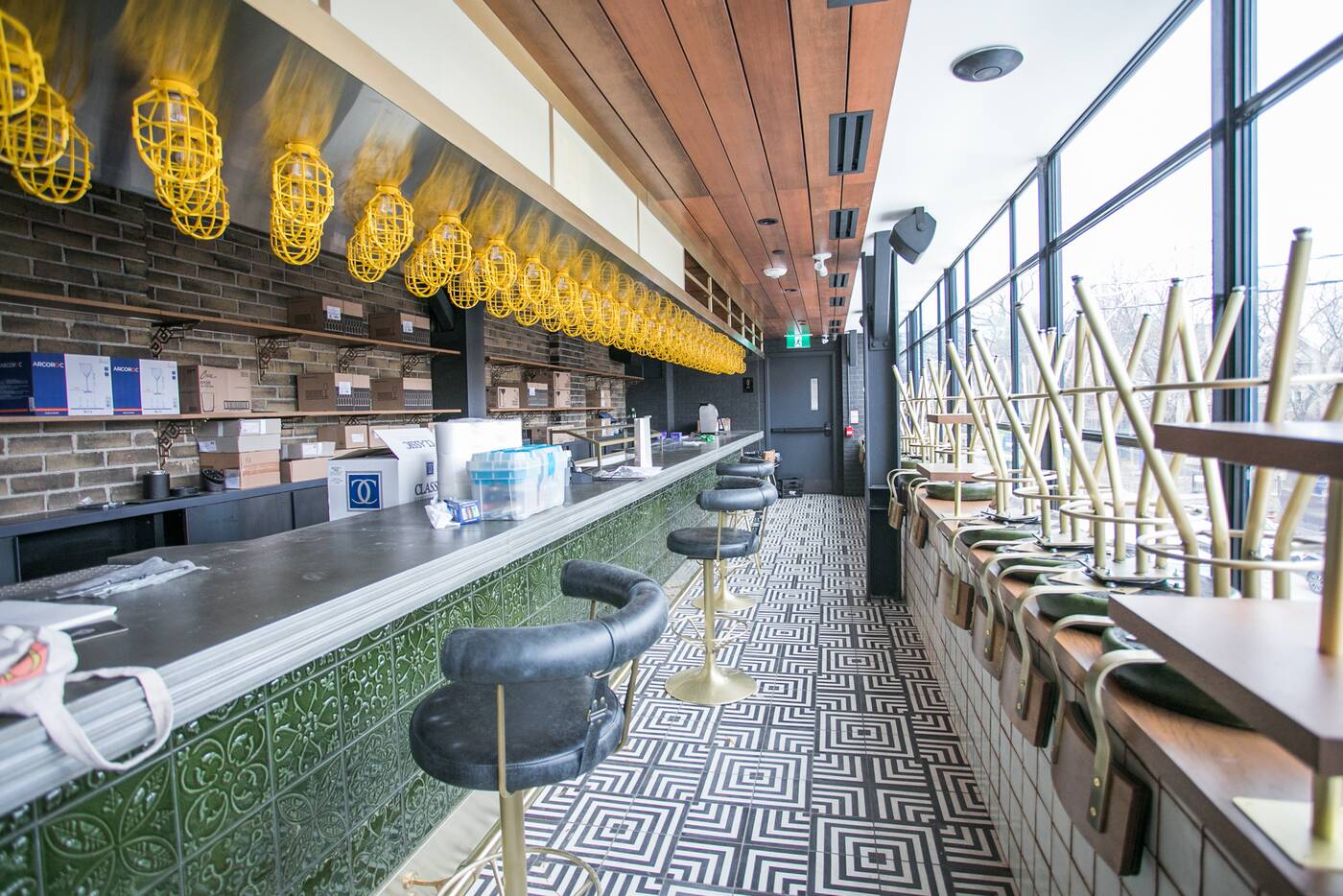 Bar Biltmore, which sits on the top floor, doesn't open until 2020.

When it does, the latter will give access to a stylish 71-person hangout offering seafood towers and cocktails curated by Robin Goodfellow of Pretty Ugly and Bar Raval. 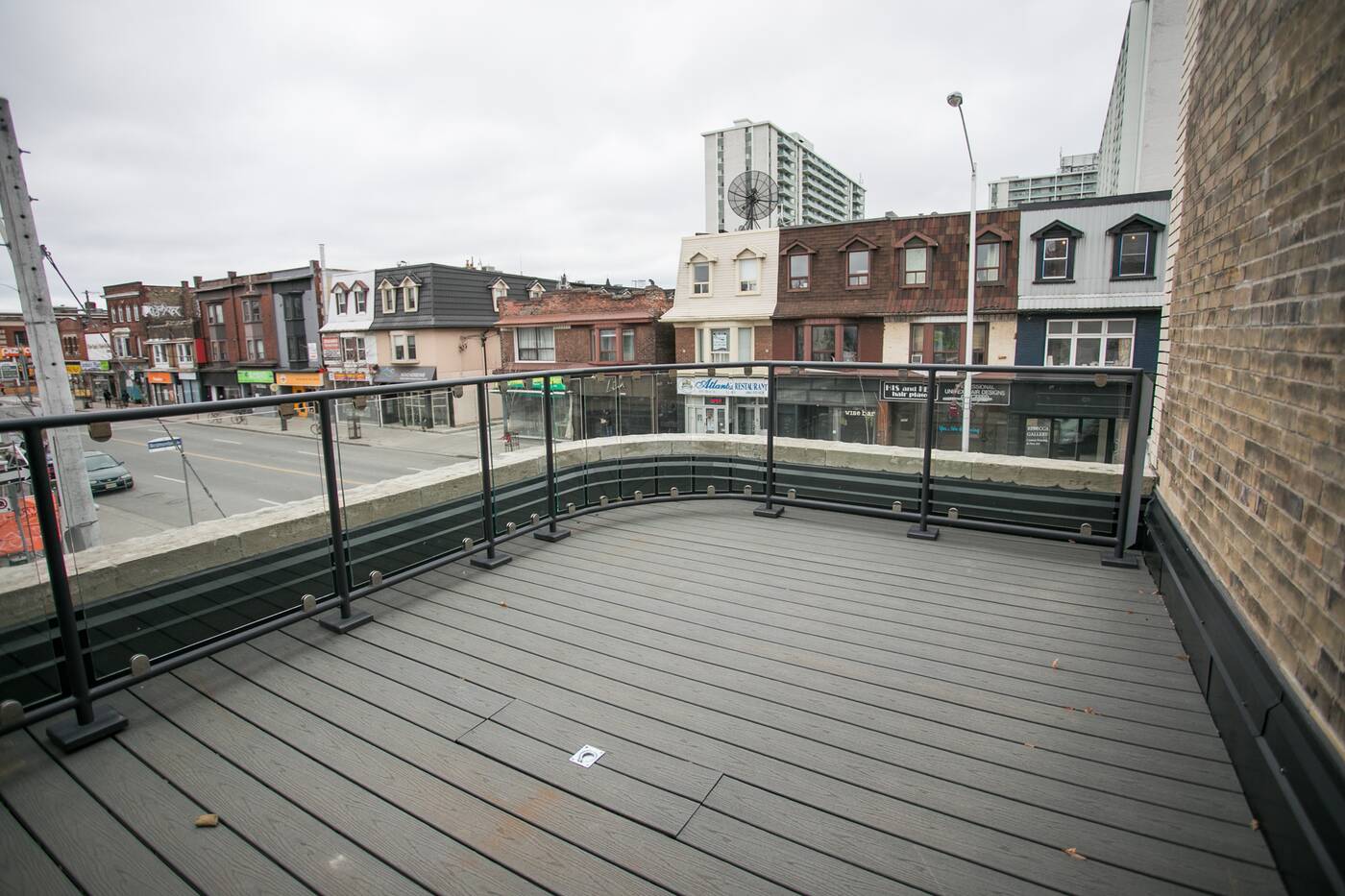 Bar Biltmore also has a patio that looks out over Bloor Street.

A patio, which looks out over Bloor and a shiny close up of the cascading sign, is part of the building's new physical addition.

The new Paradise is already proving to be an aesthetic addition to this stretch of Bloor, and it's far from the original one-storey, brick theatorium built in 1910, back when tickets were just 25 cents. But at the end of the day it's the promising film programming that will make the theatre's return to the fold an exciting one. 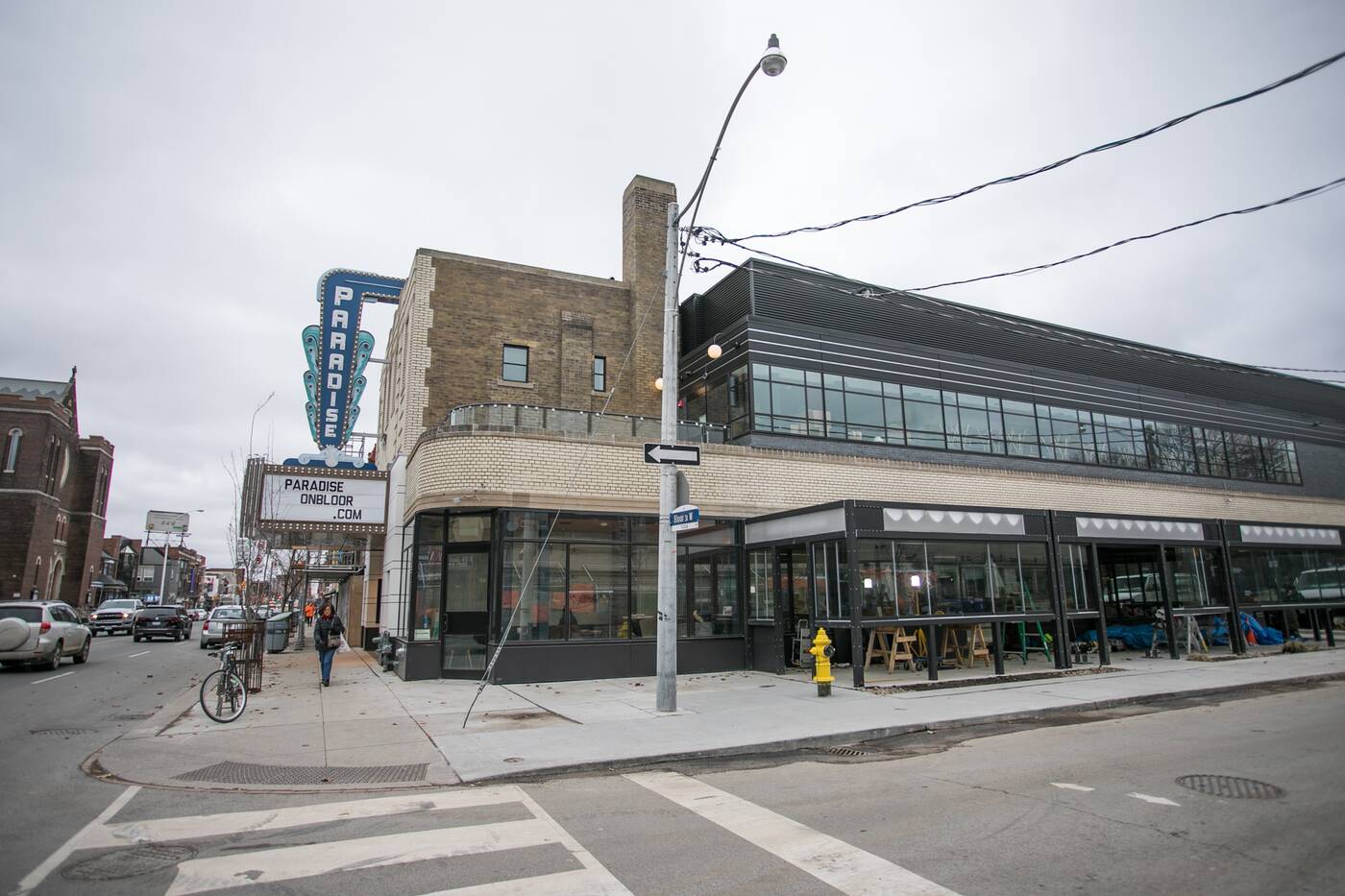 by Tanya Mok via blogTO
Posted by Arun Augustin at 12:25 AM