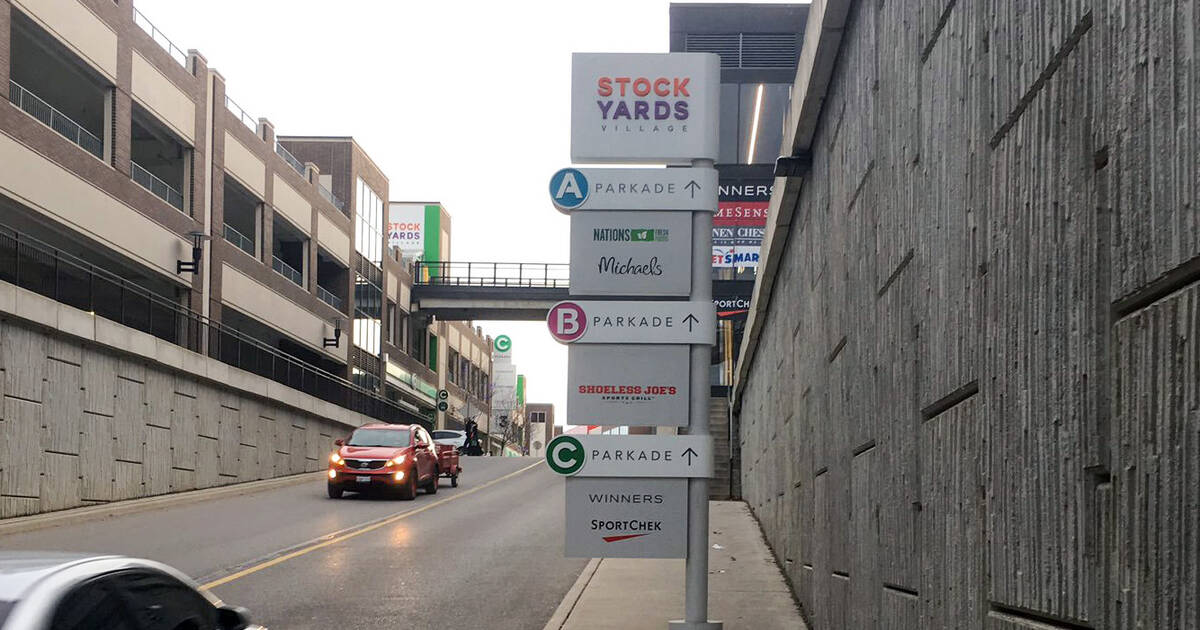 As if the people of Toronto needed any more reason to complain about the city's pervasive, car-centric infrastructure, RioCan — the Canadian real estate investment giant — dropped a wayfinding sign for three separate parking garages right in the middle of a pedestrian pathway.

Community planner Robert Ruggiero shared photos of the ridiculously-placed beacon at the Stockyards Shopping Centre on Twitter Saturday, noting that it would be impossible for a wheelchair or stroller to pass it by.

Being that the sign lies smack dab in the middle of the only sidewalk on the road leading up to the complex and is huge, it in fact makes things difficult for anyone at all to get through without a car.

Hi @RioCanLife, your sign has blocked the only sidewalk on this street. Impossible for a wheelchair or stroller to pass. @ShopStockyards pic.twitter.com/qRJVCQ8HBu

"Classic Toronto," wrote another. "No one cares about pedestrians. Not drivers. Not the city. Not police."

Some are wondering if the placement is just an innocent, albeit stupid, oversight, while others see it as a direct act of hostility against pedestrians.

That place is the most violently anti-pedestrian part of the city. It’s like it was built for cars to go shopping.

"How can these types of obstructions still happen in cities?" asked one Twitter user. "And if the blockade of the sidewalk isn't enough, three mentions on the sign of 'parkade' tells us the transportation mode that really matters to this development group."

"It's like they don’t want people to even contemplate walking to this mall. Totally and completely inaccessible," wrote another.

"We really are doing a terrible job of designing our city for people."

Who needs accessible sideways anyway, pedestrians should uses cars like everyone else https://t.co/jRiRNBiPzp

Roggerio's original tweet, which has been liked nearly 700 times, has sparked a larger discussion about accessibility in public and private spaces, as well as whether or not The Stockyards is even worth going to.

"The stores are all scattered and not well connected — which you'd think would be the one thing a mall developer would get right."

"I actually love elements of The Stockyards (the St Clair streetcar drops you right in front! Nations provides foods not found elsewhere! You can get a whole lot done and eat and transfer home!)," wrote another. "Which is why it's so frustrating to see stuff like this."

Walking there yesterday and cars just keep coming at you. Try the east side of Stockyards where the sidewalk ends abruptly. Pedestrians have created their own walkway. Just awful design.

The sidewalk is on private property, as several users noted, meaning that it's not a matter for the City of Toronto.

Some wonder if it violates the province's Accessibility for Ontarians with Disabilities Act, which helps organizations implement standards to remove barriers limiting things people with disabilities can do and the places they can go.

Ontario's Design of Public Spaces Standards do establish a baseline level of accessibility for sidewalks and parking lots, stating that an "exterior path must have a minimum clear width of 1,500 mm."

by Lauren O'Neil via blogTO
Posted by Arun Augustin at 10:05 AM