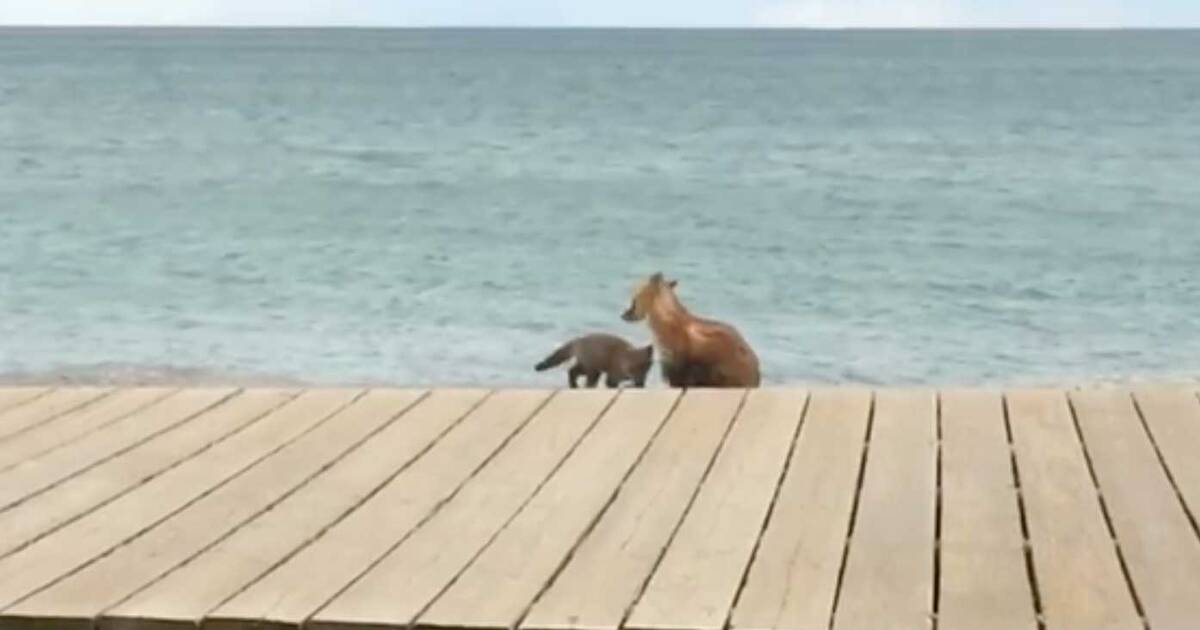 With Toronto's human population now staying inside at home for virtually all hours of the day, tons of local wildlife has been spotted taking advantage of the city's unusually quiet streets.

Foxes in particular have become a common sighting in recent days, with residents excitedly sharing photos and videos of the usually elusive creatures out and about in parts of the downtown core during broad daylight.

There is one specific group of foxes in Toronto that is causing quite a fuss these days, and for obvious reasons: a mother and her four adorable, boisterous kits.

Just a foxy looking fox and her pups hanging out next to the #Toronto boardwalk. 🦊 pic.twitter.com/nvm3CBtplA

The little family has chosen a section of the boardwalk at Woodbine Beach, of all places, to make their home, and passersby who have been lucky enough to see them out of their den have been stopping to document the cuteness overload.

Fox cubs venture out from their den under a popular boardwalk alongside Lake Ontario
Photograph: Carlos Osorio. pic.twitter.com/VYpJzNSigc

One widely-shared video shows the pups playing together on the surrounding rocks, completely oblivious to the surrounding humans while their mom keeps a watchful eye out.

Rare sighting. Foxes under the boardwalk at Woodbine Beach in Toronto. A friend sent me this video today. Happy #EarthDay #EarthDay2020 pic.twitter.com/tWjkhFLWgt

The rambunctious babies are still quite tiny and fluffy, with all of the classic red fox markings and colourings, and tons of energy.

Fox cubs venture out from their den under a popular boardwalk alongside Lake Ontario in Toronto. Photography for @Reuters pic.twitter.com/NqOygNpUHK

There's no doubt that anyone with a heart would have a hard time walking by without stopping to watch the lovable bunch and take a photo or two.

This little guy is one of the baby foxes that was living under #thebeaches boardwalk. #toronto. #wildlife. #foxes. pic.twitter.com/aHsiO7FhOr

The skulk has garnered so much attention that the City of Toronto has actually asked the public to keep on walking if they happen to see the foxes, as it may make it difficult to properly socially distance if a number of people stop to watch.

Anyone in the area with a dog was also asked to ensure their pet is on a leash.

As of Thursday, staff are erecting barriers around the den, as well as signage, "both about leaving wildlife alone and physical distancing," the City told Beach Metro News.

We are aware that a fox and her puppies have been spotted in the east end. Please continue to practice physical distancing to prevent the spread of #COVID-19. Do not gather or stay in the area to watch the foxes, and keep all dogs on leashes.

Though some experts believe that there may not necessarily be more wildlife out in the city, but that we're just noticing it more now because we're bored and paying attention, a full fox family hanging around a place as notoriously busy as Woodbine Beach is certainly an unusual development.

by Becky Robertson via blogTO
Posted by Arun Augustin at 2:21 PM