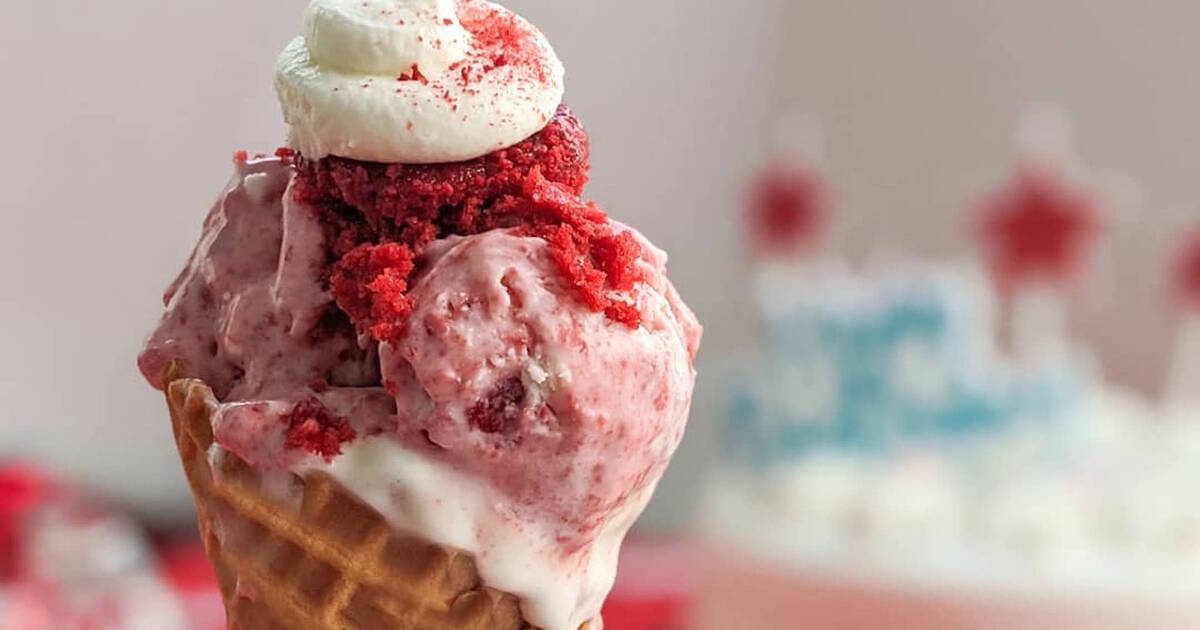 Toronto's hottest new ice cream pop-up is only available once a week for three hours, and has different flavours every time.

It's called The Screamery, and the name seems to be apt for the squeal-worthy levels of hype the limited availability of the ice cream inspires. So far they've made flavours like Chocolate Brownie Batter, Red Velvet Cheesecake and Birthday Cake Batter Crumble.

"I decided to call it the Screamery, because I turned to making ice cream during a time where I felt so powerless by things happening in my life, that all I could do was scream," says founder Varsha Sreekumar. "So I screamed for ice cream."

A passionate baker with a decade of working in advertising under her belt, Sreekumar found herself depressed when her work was affected by COVID-19. She sought comfort in turning excess strawberries into one of her favourite foods: strawberry ice cream. When she let others try it, they were more than impressed.

Her goal is to recreate some of her favourite desserts in ice cream form, but without the flaws she's seen: too thin of a dulce de leche ribbon, stingy portions of cookie dough. That means you can expect an extra indulgent ice cream from The Screamery.

A "theme" with two flavours is decided on each week with the help of Sreekumar's best friend Sam. For example, "week two was all about Canada's birthday," says Sreekumar, "so the flavours we decided to share were Red Velvet Cheesecake and Birthday Cake Batter Crumble."

They actually have themes based on feedback they've been receiving planned out until the fall. However, this system means that flavours rotate every week, so once they're gone that week, you're not likely to seem them again next week.

"As women of colour, we're also excited to introduce ice cream flavours like rose water and cardamom that we grew up eating," she says. "We strive to create every element of the flavour from scratch, whenever possible. So not just the birthday cake batter base, but also the truffles and crumbles throughout the pint."

The theme is announced on Sunday, and then you have until Wednesday at 12 p.m. to order via email. They send invoices via PayPal, and once you pay your order is confirmed. Pints are a standard 500 ml, and cost about $12.50 though that can vary based on ingredients.

All the ice cream is then churned to order so it's ready for curbside pickup on Thursday from 5 p.m. to 8 p.m. at one of two locations: Queen and Gladstone or Humber Bay Shores in Etobicoke.

"We decided that this model would work the best for us since it results in no product being wasted, very generous servings, and most importantly it enables us to continue experimenting with different flavour profiles, while gathering feedback from our customers," says Sreekumar.

"Maybe we'll use the feedback to create a set menu some day, but for now we're just excited to try new flavours and gauge their response."

The Screamery launched just two weeks ago, but Sreekumar has already seen her orders double in the second week primarily through word of mouth, after starting out distributing mostly to friends and family in the first week.

"I've always loved ice cream, and I've always found that getting creative in the kitchen to be incredibly healing," she says. "Making ice cream pulled me out of my dark place."

by Amy Carlberg via blogTO
Posted by Arun Augustin at 9:48 AM