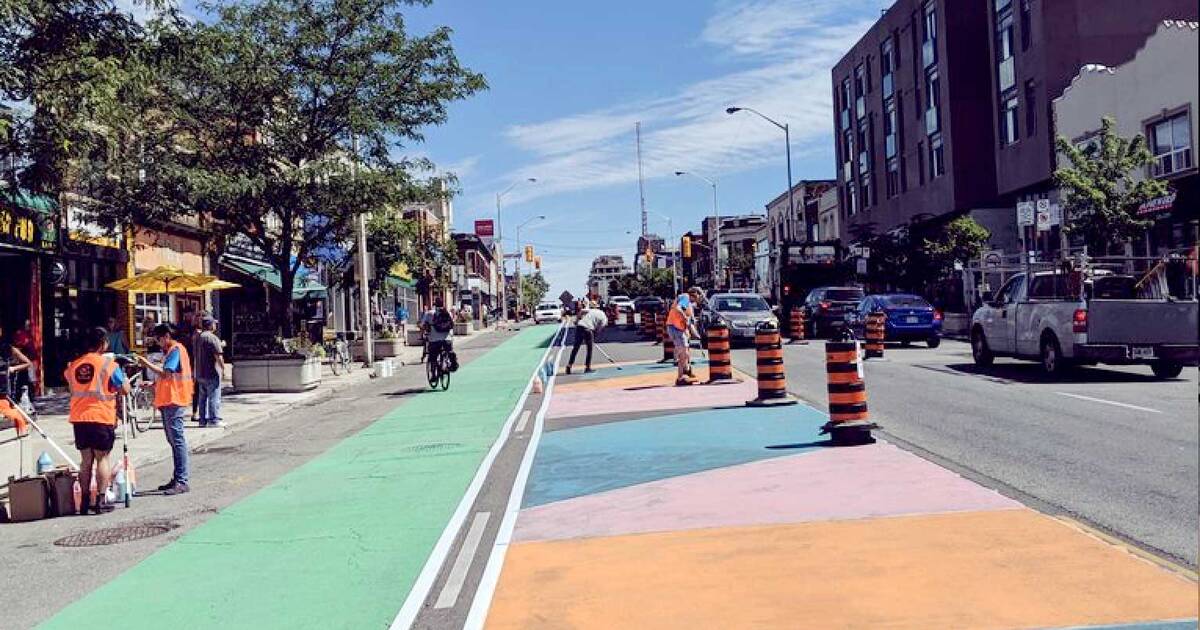 Violent vehicle collisions, often involving pedestrian fatalities, seem to be the norm in Toronto these days ⁠— so a pop-up demonstrating the principles of safer street design for pedestrians couldn't come at a better time.

Starting today at 5 p.m., a section of Toronto’s Danforth Avenue from Woodbine to Woodmount will be repainted and restructured for 8 80 Streets Danforth.

What are usually two curb lanes will be replaced with expanded walking space for pedestrians, and separate bike lines are also being implemented.

Volunteers working on the 8 80
Streets pop up bike lanes Danforth and Woodbine pic.twitter.com/5NgthQUjZ9

Behind the project is non-profit 8 80 cities, an organization "bringing citizens together to enhance mobility and public space so that together we can create more vibrant, healthy, and equitable communities."

The project was approved by Toronto city council as a part of their Vision Zero plan.

According to a press release, the project was funded through a private donor whose friend was killed in a road collision in 2018.

“We want to bring people in the Danforth community together to actually be part of building the solutions for safer streets," said  Amanda O’Rourke, Executive Director of 8 80 Cities.

The complete street pilot getting set up on Danforth Ave. This street is *wide.* @880Cities #TOPoli pic.twitter.com/iCCdPNqug0

"We want to highlight, in a short amount of time and with simple materials, how you can build a better street for people. The elements we are showcasing are proven design solutions that can save lives while also contribute to the overall health, equity, and vibrancy of the city.”

Living out a dream! Filling in a bike lane on Danforth 🚲❤️#bellsondanforth#880streets pic.twitter.com/RXKgCDhN2E

According to O’Rourke, there have been at least 22 pedestrian fatalities already in 2019.

Vision Zero is the city's plan to attain zero pedestrian and cyclist deaths in the city, and this pop-up  is a lesson on how we can eventually get there.

“8 80 Streets Danforth is an invitation for Torontonians to experience how a complete street feels," said Toronto city councillor Brad Bradford.

"With Toronto growing quickly, projects like this encourage us to think about how we can design our city for people of all ages and abilities. I’m proud to welcome this project — the first of its kind in Canada — to our Danforth East community.”

Toronto, we have a bike lane! Thank you to the amazing volunteers who made this happen in 10 hours. @880Cities @DECAdiaries @EarthDayCanada @BradMBradford #880streets pic.twitter.com/Uyx20xs3L7

The pop-up begins at 4 p.m. today and will feature small 'parklets' with live music, kids programming, public art and other festivities until 3 p.m. tomorrow.

by Mira Miller via blogTO
Posted by Arun Augustin at 10:04 AM