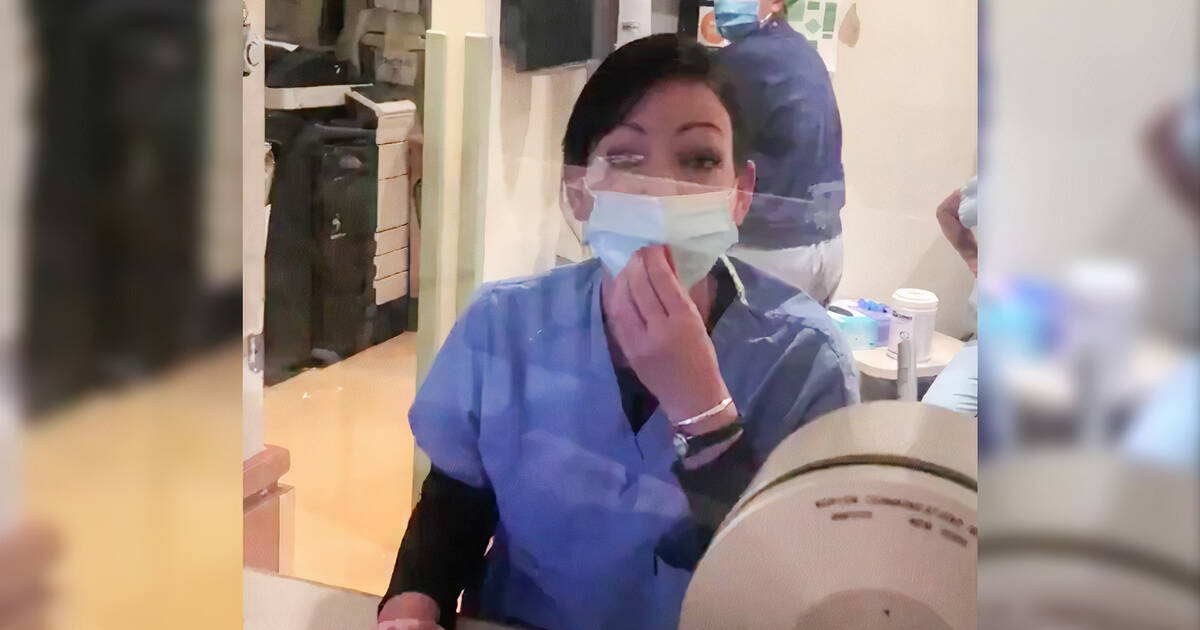 A Toronto woman who describes herself as a "truther" and "freedom lover" is being ridiculed widely online today after sharing video footage of herself refusing to wear a mask inside a local hospital — and then complaining about how she was denied service because of it.

"Went into the Emergency Dept. at St Joseph's Hospital in Toronto for a suspected broken finger," wrote Letitia Montana when publishing her now-viral clip via Twitter on Saturday night.

"I was asked to wear a mask, which I refused to do. As a result, hospital staff asked me to leave and immediately called 3 security guards to escort me out. #filmyourhospital."

Went into the Emergency Dept. at St Joseph’s Hospital in #Toronto for a suspected broken finger. I was asked to wear a mask, which I refused to do. As a result, hospital staff asked me to leave and immediately called 3 security guards to escort me out. #filmyourhospital pic.twitter.com/7KlDa11udk

In the 30-second-long Twitter video, a nurse can be seen asking Montana to wear a face mask (provided by the hospital) before moving past triage and into the emergency room.

"You're making me wear a mask, otherwise you're going to deny me service if I don’t wear a mask," states Montana from behind the camera as another nurse nods and states "you have to wear a mask."

The nurses tell Montana that the mask policy comes down from Ontario's Ministry of Health, which currently recommends that most people use non-medical face coverings "to reduce the risk of transmission of COVID-19 when physical distancing and keeping two-metres' distance from others may be challenging or not possible."

Montana later stated on YouTube that security guards told her she was putting her son at risk, and asked if she was "aware that we're in a pandemic situation."

"That's a lie," said Montana, who believes COVID-19 is a fraud, regularly participates in anti-lockdown protests at Queen's Park, and recently called Toronto's successful open streets program "a constant reminder of the increasing abuses on our freedoms."

Wear a mask in a hospital if they ask you. Just like those surgeons when they operate. Hospital workers are not propaganda believers. They are trained medical professionals. All the best.

Montana certainly attracted quite a bit of attention by posting footage from her hospital encounter online: it's racked up more than 4.7 million views on Twitter alone in just two days.

The vast majority of that attention is critical in nature, however, and it's coming from every direction.

Actors Ben Stiller, George Takai and Jay Baruchel are among the celebrities who've replied to the financial advisor on Twitter to condemn her actions.

"Wear a mask in a hospital if they ask you. Just like those surgeons when they operate. Hospital workers are not propaganda believers. They are trained medical professionals. All the best," wrote Stiller.

"This is a new level of moronic and entitled," wrote Takei.

And whoever this nurse is: congrats on being a total boss. pic.twitter.com/2znXCX1u5Z

Politicians, medical professionals and vulnerable patients are similarly clapping back against Montana while simultaneously praising staff at St. Joseph's Health Centre for how they handled the situation.

"First off, a hospital is not a restaurant. They're not 'serving' you - these are doctors. They practice medicine," reads one popular reply.

"Second, are you really putting them on blast for not letting you break hospital protocol — during a global pandemic? Did you not notice the masks on everyone else's face?"

"You're doing social media all wrong, Letitia. Don't make your name a verb. Put the camera away and don a mask inside public places, *especially* hospitals. Doing so protects others — you know, your fellow humans."

Says the lady who’s lets her son into a hospital without a mask and openly eating a pizza that’s flopping around. pic.twitter.com/G7q0h3SfiB

"How easy it is for some of you to judge! The few times I put a mask on I could hardly breathe especially with the hot summer heat," she wrote on Sunday night.

"This has lead me to do research on them and what I learned from the science is that they do compromise your health in more ways than one."

Indeed, there are some (debunked) conspiracy theories floating around online to suggest that masks deprive the body of oxygen or even "activate" the coronavirus, but scientists say these claims are false and dangerous.

Canada's top medical professionals believe there is sufficient enough evidence in favour of mask usage to help curb the spread of COVID-19 that the practice is now formally reccommended.

This is incorrect. Like, all of it. Doctors have filmed their oxygen numbers while wearing a mask for 10 hours and the numbers did not decrease at all. Stop spreading false information as well as germs, you covidiot

While it is not mandatory to wear a face covering in Ontario, a new City of Toronto bylaw will require all residents and visitors to don non-medical masks within indoor public spaces beginning this Tuesday, July 7.

"Wearing a mask or face covering is an additional measure we can take to reduce the spread of COVID-19 and keep each other safe," wrote the city when announcing its "Mandatory Mask or Face Covering" bylaw.

"This means that, with some exceptions, all customers or visitors entering an indoor premise are required to wear a mask or face covering while inside."