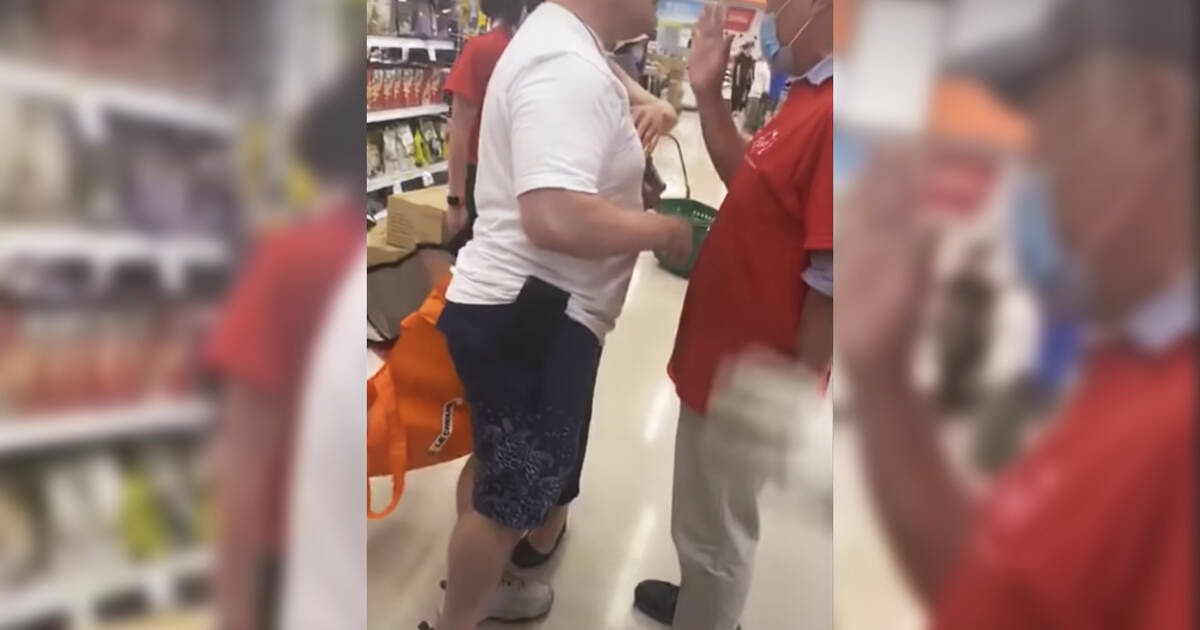 This week in entitled white boomers going viral, a man has been caught on video making unbelievably racist remarks at a Mississauga T&T Supermarket to employees who asked him to wear a mask while shopping.

Though face coverings in indoor public spaces are not yet mandatory in Durham Region — though they will be as of July 10 — T&T, a chain that specializes in primarily Asian foods, implemented its own policy surrounding the garment back in May for the safety of customers and staff.

Apparently, this anti-mask shopper was not having it, and decided to go on a racist tirade about COVID-19.

In the footage from Tuesday, which now has more than 12,500 views on YouTube, the man is heard yelling at multiple staff members, saying things like "Where did we get our Wuhan communist virus? From China. From you guys."

He then proceeds to ask an employee where he's from, to which the worker responds "We are Canadian, I'm Canadian" and asks the man repeatedly to stop screaming.

The customer goes on to claim that he has asthma, which prevents him from being able to wear a mask (though it apparently doesn't hinder his ability to breathlessly yell in someone's face for many minutes at a time).

He also decides to enlighten everyone at the scene with his theories about why masks are a communist conspiracy and detrimental to anyone who wears one.

"When you wear the mask, you get sick, it's science," he says.

Thankfully, multiple employees eventually manage to herd the man out of the building, but not before a struggle during which he yells to the entire store that "these communists are all attacking us" and that he is going to have an asthma attack if he is forced to wear a face mask.

He also threatens staff with physical violence and police action a la Amy Cooper, telling them they are "going to be in trouble."

He ends the dramatic four-minute-long display with such shocking statements as "go back to China where you came from and take your coronavirus back to Wuhan," and telling an employee that he is "as Canadian as my butt" multiple times.

Viewers have commented on the tirade with utter dismay, noting that racism is still alive and well in Canada and that these residents who are both anti-mask and racist are "the literal worst."

"My heart was broken and tears shed," the original poster of the video wrote in its caption. "When that guy shouted at him, he didn't know how to fight back, he kept saying 'I'm Canadian.' Obviously, Canada is his home! Where is our multiculturalism? Where are our national values?"

"Even PM Trudeau called grocery store employees heroes! Why are heroes treated like this? I don't understand."

As sociopolitical, economic and other tensions remain heightened amid the global pandemic, widespread anti-racist protests and everything else that's going on right now, it's clear that despite the fact that it sometimes feels like progress is being made, we still have a whole lot of work to do.