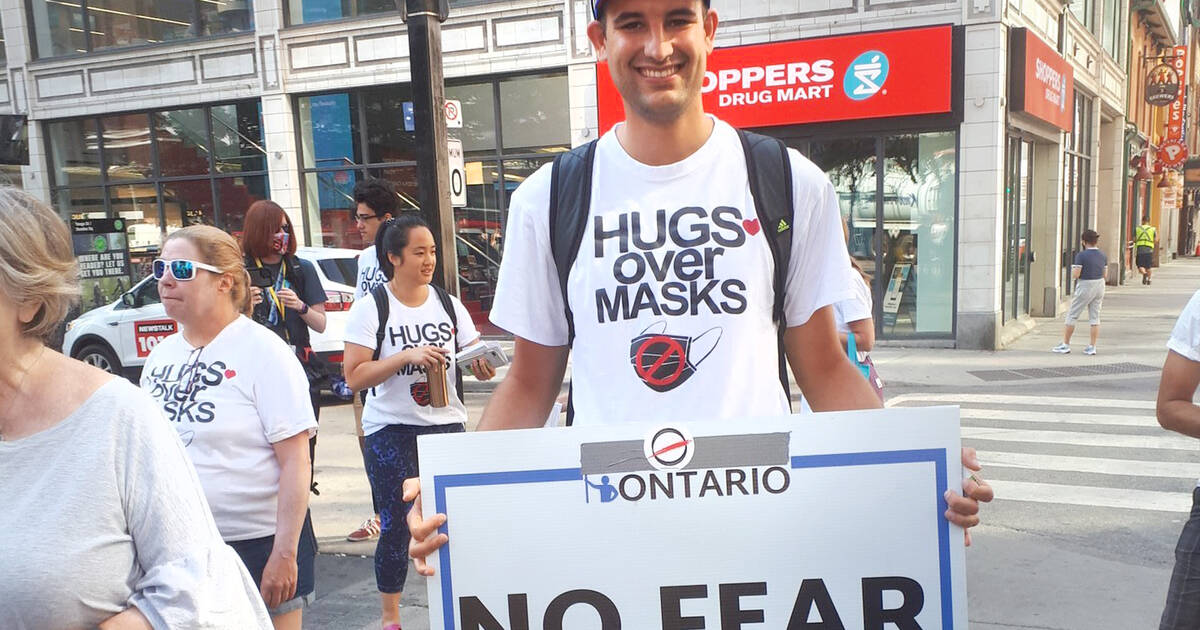 Today is the first day that face coverings are officially mandatory in all indoor public spaces in Toronto, and groups of anti-maskers have inevitably decided to protest the new bylaw (which doesn't actually carry any fines for noncompliance).

People have taken to Yonge and Bloor and Yonge and Dundas to rally against being asked to, in certain situations, wear a piece of fabric over their face as a courtesy to others while the threat of COVID-19 still looms.

Some at the more northerly intersection are handing out phony cards stating that they fall into the categories of people who are exempt from the new rule, which includes those with certain health conditions and children under the age of two.

Anti-mask protestors now at Yonge and Bloor, handing out cards that day they are exempt from following the public health order mandating face coverings inside public spaces in #Toronto pic.twitter.com/tnrmLW1oKp

On the scene at Yonge-Dundas Square are such characters as Chris Saccoccia, the Maserati-driving resident who filmed himself pushing through Longo's workers that were trying to stop him from entering the grocery store without a mask (against the store's policy amid the pandemic), and Letitia Montana, the woman who was now-famously asked to leave St. Joseph's Hospital for refusing to wear a mask in the emergency room.

You looking kind of dumb right now with your mask not on in enclosed spaces and you're not respecting those people who've experienced loss from this virus. Put down your signs and put on your FUCKING mask. pic.twitter.com/1kiBUiX9kL

Both boarded the subway along with dozens of fellow demonstrators chanting things like "no new normal" and "take off your mask" while ignoring social distancing and flouting the TTC's own mandatory face covering policy, which came into effect on July 2.

Many of those present are members of anti-mask "organizations" such as Hugs Over Masks and Mothers Against Distance (MAD).

Letitia Montana is back. Here with groups MAD- Mother’s Against Distance, and Hugs Over Masks. On Day #1 of Toronto’s ‘mandatory’ mask order, the group of app. 40 boards/travels on the TTC via subway, mask-free. #topoli #onpoli pic.twitter.com/JkigQ4k3uv

The groups are advocating for members of the public's personal freedom to choose whether to don the simple garment (and thus whether to get infected and to infect others with a potentially fatal communicable disease).

As the internet collectively continues to laugh at all of the Americans that have gone viral for refusing to abide by various mask policies during the health crisis, let's not for a moment think that Canadians are above the same entitled idiocy.