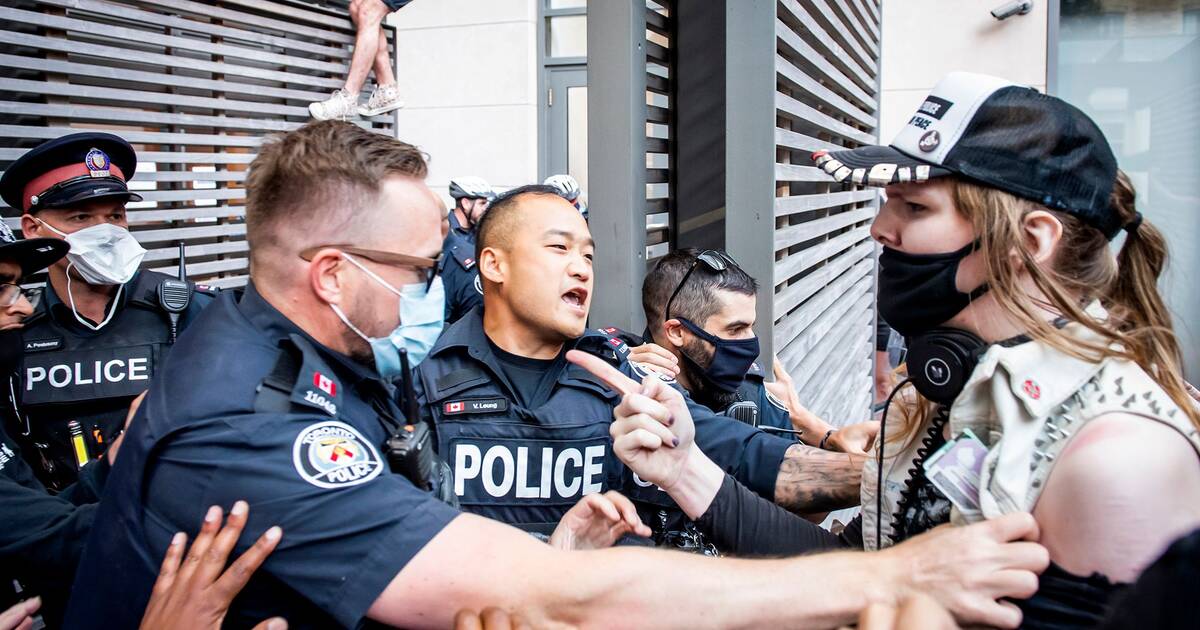 A peaceful protest against the looming prospect of mass residential evictions turned into a dramatic standoff last night outside the posh Yorkville condo residence of Toronto Mayor John Tory.

Things are getting heated between the Toronto Police and tenants at the Emergency Action Against Mass Evictions rally - 📹 @hectoravasquez https://t.co/G5o5fTuM0l #Toronto #TOpoli #ONpoli #NoCovidEvictions pic.twitter.com/LRGPV0W1Tk

Hundreds of advocates had gathered outside the Ontario Legislature in Queen's Park on Monday evening to voice their disapproval of Bill 184, which critics say will pave the way for landlords to evict tenants with greater ease than prior to the pandemic.

Dubbed by the province as the "Protecting Tenants and Strengthening Community Housing Act," Bill 184 has already passed a second reading and is currently awaiting a third reading pursuant to the Order of the House.

Bill 184 is an attack on low and moderate income communities. We need to shut it DOWN!

Tenants are rising up against Ford's attack on our homes.

If passed, all changes made under Bill 184 would apply retroactively to when Ontario first declared a state of emergency in response to COVID-19 and temporarily banned residential evictions.

For thousands of apartment dwellers who've now been withholding their rents for months, this could mean an immediate loss of home once the state of emergency ends.

It's a scary prospect, especially as reports continue to circulate of landlords threatening to evict non-paying tenants once the moratorium is lifted.

Hundreds take over the streets of Toronto to oppose #Bill184. “Come for us, we’ll come for you! That is what good neighbours do!” #NoCovidEvictions pic.twitter.com/zoqL8YCQNj

Advocates have been calling upon all three levels of government to provide greater rent relief in Canada's most expensive city, where the average one-bedroom rent price is currently just under $2,200 per month (and that's relatively low thanks to COVID-19.)

"The Ford government is making its move to mass evict Toronto tenants," reads a description for Monday night's protest event, organized by the KeepYourRent movement.

"While tenants hoped for relief, the Ford government snuck through amendments to Bill 184 that clear the way for landlords to evict 1,000s of Toronto tenants who have been unable to pay rent during COVID-19."

"The question is now put to the people of Toronto: will we let them destroy racialized and working class neighbourhoods throughout our city?" continues the event description. "We know what they want, they are coming for our homes. We know what we have to do, get ready for a fight."

"On Monday, Toronto must show up. This is not a fight we can afford to lose."

Show up, the people of Toronto did — a few hundred of them anyway — but they didn't stop at Queen's Park.

Protesting for what you ask?
The socialists want free rent, and to never be evicted for refusing to pay it... 🤦

After a short rally outside the Legislature, protestors marched to One Bedford, the glamorous condo building where Mayor John Tory lives (in a $2.4 million unit) with his wife.

Members of the same group similarly staged demonstrations outside the sprawling mansions of local real estate CEOs back in May to demonstrate their commitment to the cause of affordable housing.

During last night's event, protesters brought an N7 "eviction notice" with them to Tory's building. While they did not get to meet with the mayor himself, they slapped the form on his building's window at one point for photos.

🚨BREAKING🚨 Tenants issue eviction order for Mayor John Tory. "Come for us and and we'll come for you. That is what good neighbours do." #TOPoli pic.twitter.com/IoWU3gPfoV

The crowd grew unruly as police stepped in to intervene. At one point, people could be seen climbing up the condo building (and subsequently being pulled down from the building by officers.)

The police forcibly punched, pushed, and tried to detain protesters. Toronto tenants furiously defended their neighbours and did not move until police release those detained. This is a two way fight. Tenants are organized and ready for what comes ahead. #Bill184 #onpoli pic.twitter.com/O1hewvnkBM

It was an intense scene, and while Toronto Police said no arrests were made, officers were captured on camera shooting what appears to have been pepper spray into the crowd.

Protesters tried to get into Tory's condo building, but police prevented them from doing so.

Still, groups supporting the event seem confident that their messages were heard.

"Tenants across Toronto made a commitment today. We will not stand for the eviction of our neighbours. We will not tolerate the displacement of racialized, working class people in this city and we will defend anyone at risk of losing their homes," wrote People's Defence Toronto on Twitter.

"You come for us, we come for you. That is what good neighbours do."