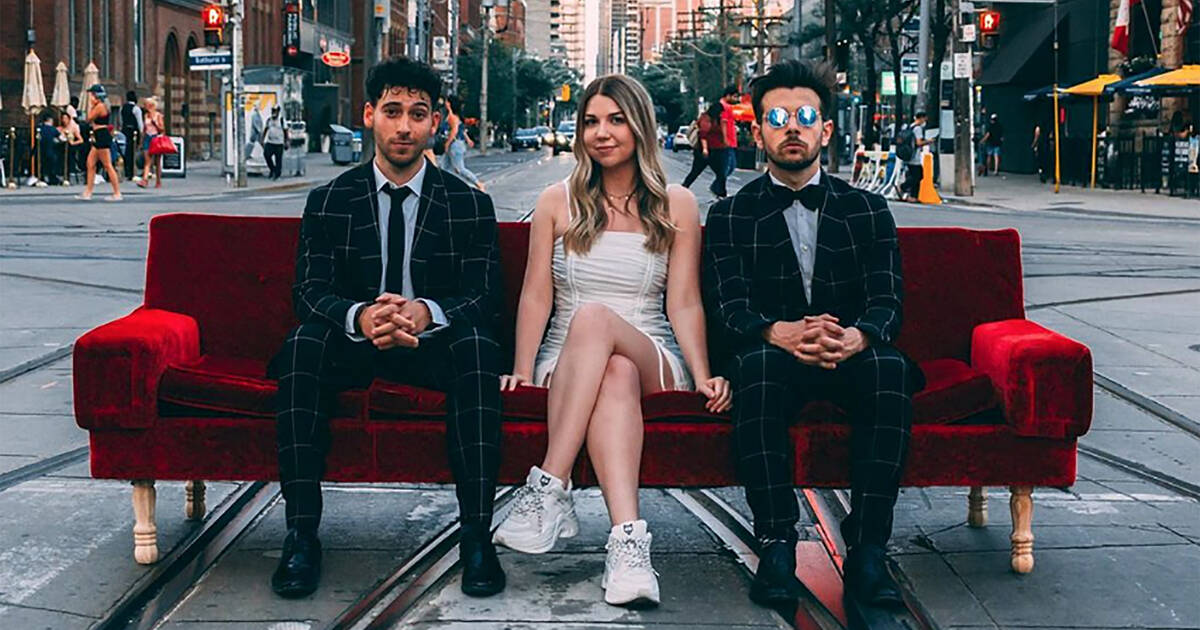 If you happened to be in the area of King Street West and Bathurst Street earlier this week, you may have seen something interesting going on when a local band parked a huge red sofa in the crosswalk.

The velvet sofa belongs to Crash (it's actually his grandmother's), a member of the Toronto duo Crash Adams, and was used on Monday to film a TikTok clip featuring YouTuber Brianna Renee singing Dixie D’Amelio's new tune "Be Happy".

This Toronto band performed on a sofa in the middle of King & Bathurst - 📹 Crash Adams https://t.co/IZdBX25631 #Toronto #KingWest #Bathurst pic.twitter.com/y4fXpqvAJK

The first time the band used the sofa was in May 2019 when they brought it to Yonge and Dundas Square for a shoot.

"We noticed that throughout making our music, we happened to have that red couch and we decided to take some photos on it," Crash told blogTO.

"When we did that... we found that it actually helped our music get noticed because that initial photo drew people to us. Once they heard our music, they started becoming fans."

From there, he said the idea came to bring the sofa to different parts of Toronto, and when it's safe to do so, cities all over.

Because of the pandemic, there's definitely been a change from when they first brought the sofa out until now, he said.

"When we were at Yonge and Dundas, we had a lot more people that were actively coming up to us and asking us questions, so we would let them to take a photo on the couch. We really entertained the conversations."

People still coming around to watch the action, but the only difference is "not one person has sat down on our couch."

"We wanna keep it that way."

The band has developed a big TikTok following since the platform took off. Not ones for performing in bars and clubs, the band has found that the best way of growing its audience has been through TikTok and social media, giving them a lot more online exposure.

"In order to get the most amount of people to see us, I really believe social media is a bit more efficient than playing bars and clubs," he said.

Crash Adams still practices up to five times a week to stay sharp, especially since they're planning to tour through the U.S. with the sofa once everything is safe to do so.

Until then, the band is bringing the sofa to different Toronto neighbourhoods roughly once every two weeks.

by Lisa Power via blogTO
Posted by Arun Augustin at 11:48 PM