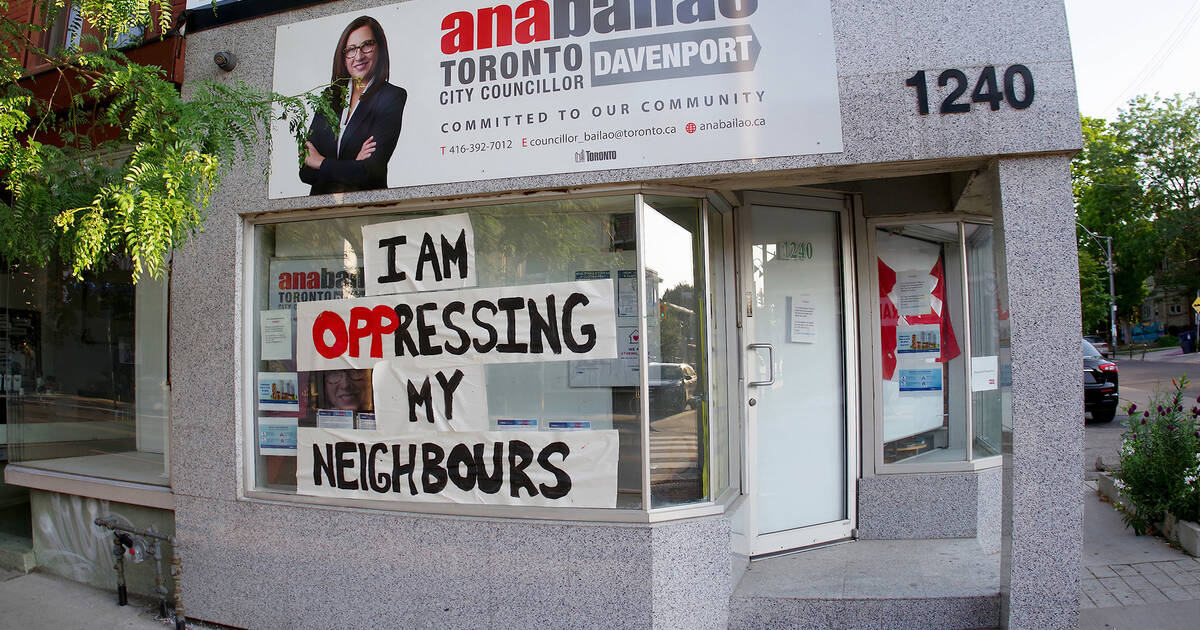 Toronto city councillors who voted against defunding the Toronto police budget by 10 per cent last week are now facing backlash from constituents who are in favour of the popular motion presented by Councillor Josh Matlow.

A total of eight councillors supported the idea while 16 opposed it — and those 16 are now receiving spates of angry correspondence and finding signs plastered to their office windows.

Residents have placed a massive sign reading "I am oppressing my neighbours" — with the "opp" highlighted to reference the Ontario Provincial Police — on the front of the Bloor Street West office of Ward 9 Davenport Councillor and Deputy Mayor Ana Bailão, while others are taking to phone lines and social media to air their grievances about the decision.

Defunding the police has been a hot button topic in the wake of global protests against police brutality and impunity, as well as systemic racism and a lack of proper crisis training among authorities.

Toronto has seen a slew of marches, sit-ins and other demonstrations, especially after the death of Regis Korchinski-Paquet, a young Afro-Indigenous woman who fell from a High Park balcony to her death while police were in her unit after being called to her aid during a mental health crisis.

Groups even painted "defund the police" in front of Toronto Police Services (TPS) headquarters on College Street last month as many continue to call for money to be taken from the $1.2 billion police budget and put toward alternative frontline services, like social workers, as well as community supports that could help to prevent crime and violence.

But some are wary of the idea, perhaps not fully understanding the differences between police reform (which doesn't often result in enough real change), police defunding and police abolition, in which the entire system of law enforcement as we know it is completely dismantled so it can be reimagined.

Disappointed in @McKelvieWard25 for voting against Matlow’s motion to defund the Toronto police. Abuse of power in the police force is a huge issue and reform doesn’t change enough, we need a smaller police budget. Email your councillors!!

Though the board of the TPS has detailed how it will try and change the force to confront anti-Black racism — which includes further ethics and inclusivity training and "developing new community-based models" for responding to mental health and addictions crises" — activists say that this type of reform is simply not enough.

Many also feel that a cut of 10 per cent to the police budget, which could have resulted in the culling of 1,000 of the force's 5,500 officers, would not have even been enough anyway, had it gone through.

Police Chief Mark Saunders, who is stepping down at the end of this month, said in the anticipated and much-watched virtual council meeting on June 29 that he doesn't support "arbitrary cuts" to policing in the city.

"If something is put in place that enhances community safety, I would definitely consider that. But I certainly as the police chief would like to see what it was to see that it meets or exceeds the standard of where it is present day," he said.

These 16 councillors voted AGAINST 10% cut to defund the police. What a SHAME that these folks failed to see the irreparable harm police force has caused to BIPOC. #BLMprotest #DefundThePolice #Toronto #shame https://t.co/xdc4oDc4us

Residents will have to wait and see if and what change takes place as people around the world continue to call for substantive changes to policing worldwide and further pressure is put on local politicians.