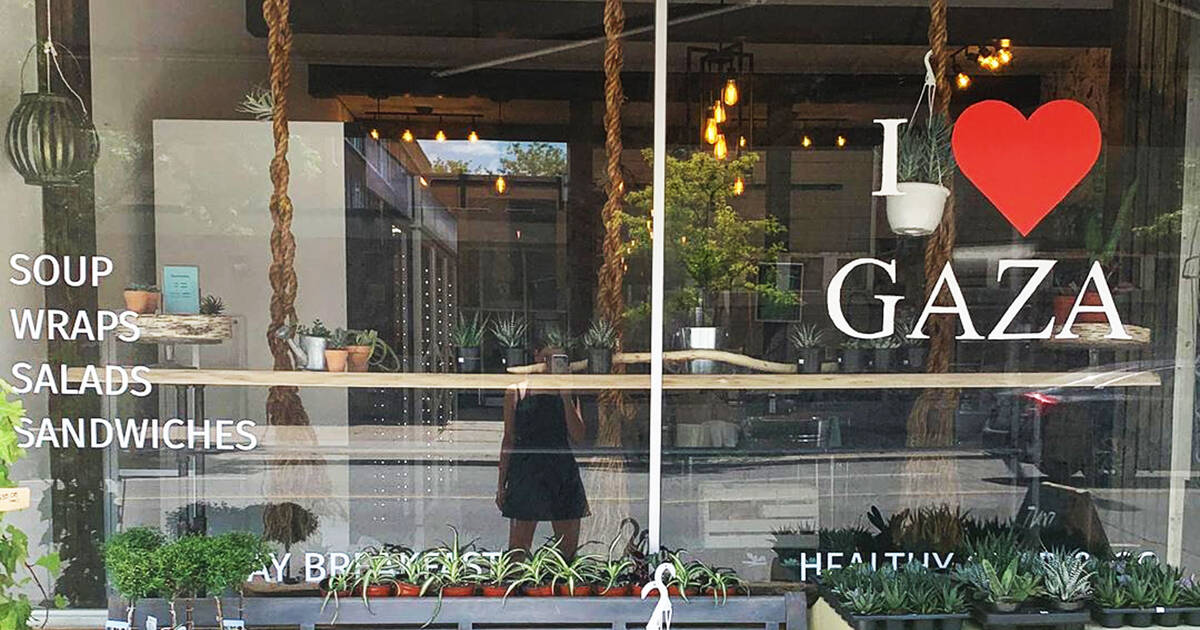 A restaurant that came under fire last month for their anti-police sign is being criticized again — this time for its stance on Israel.

Bloordale's Foodbenders is back playing defense just a few weeks following its controversial "F*ck the Police" sign at the height of Toronto's anti-Black racism and police abolition rallies.

The food spot is now being called out for an Instagram post with hashtags calling for a free Palestine and banning Zionists from the shop.

The hashtags, which were placed under a post in June with the caption stating the shop had reopened for "non-racist shoppers", have sparked outrage from some in the Jewish community, who've charged Foodbenders with antisemitism and racism.

"At a time when racism is front and centre in the news, I was quite shocked and surprised to see a local Toronto company @foodbenders openly promote their racism and Jew hatred by blatantly and proudly posting that anyone who believes Israel has a right to exist is not welcome - basically it means no Jews are welcome."

But Foodbenders' owner Kimberly Hawkins says she wants to clarify: Jewish people and Zionists are more than welcome in her store.

"I’m not antisemitic," says Hawkins. "That would go against all the other principles that I’ve been standing up for the past few weeks. I believe that Palestinians should be free and have the same equal human rights as everyone and that’s not a stance I will apologize for."

Hawkins says she's received a flurry of hate messages recently, but would be more than happy to have conversations with people who want to have "a respectful conversation about their beliefs and any differing views".

"When I'm making a statement about Zionism, I am not referring to Jewish people... It's about the state government."

But she's been met with aggression, says Hawkins, from people who've taken her comments "out of context" and who've conflated anti-Zionism with the Jewish community at large.

This isn't the first time that Foodbenders and its contentious sandwich board has drawn ire from Jewish community leaders like B'nai Brith and the Centre for Israel and Jewish Affairs, both of whom have decried the restaurant for its statement on Israel and Zionism.

The brand has long been outspoken about its stance on the Israeli-Palestinian conflict on social media, and strongly supports the BDS Movement: a Palestinian-led campaign that's compared to South Africa's anti-apartheid movement by some supporters and, on the flip side, antisemitic Nazism by some in the Jewish community.

Hawkins, who describes herself as a "white Canadian settler on Turtle Island" says she's been a pro-Palestine supporter since she was 16 years-old. She also says that about half of her customers are Jewish.

Currently, Foodbenders has a sign in its front window in support of Gaza: the strip of Palestinian territory currently under Israeli blockade.

On Canada Day, the restaurant put out a sign that said, "Happy KKKanada Day", which alluded to white colonial power's occupation of the traditional Indigenous lands of Turtle Island. Needless to say that post also drummed up some controversy in the comments section.

The political statements have definitely affected Hawkins business, she says, whether in relation to the views on Zionism or police-abolition. But she says people are allowed to boycott her store, so long as they don't send her death threats, or lie about Foodbenders' quality of food online.

The brand doesn't shy away from sharing its altercations on social media, either, posting screen shots of threatening messages and videos of in-person disagreements that include being called slurs and being spat on — experiences that Hawkins calls "very scary".

But when asked whether or not she'll remain being outspoken about divisive issues, Hawkins says yes.

"I think that businesses have to get political because we’re at a stage in our capitalism where we’re headed on the path of destruction," she says. "I believe food is very political and I just don't see a future for us if we continue to maintain the status quo."

Hawkins says that police have not been in contact with her regarding hate speech charges, as suggested by some people in the Instagram comments sections.