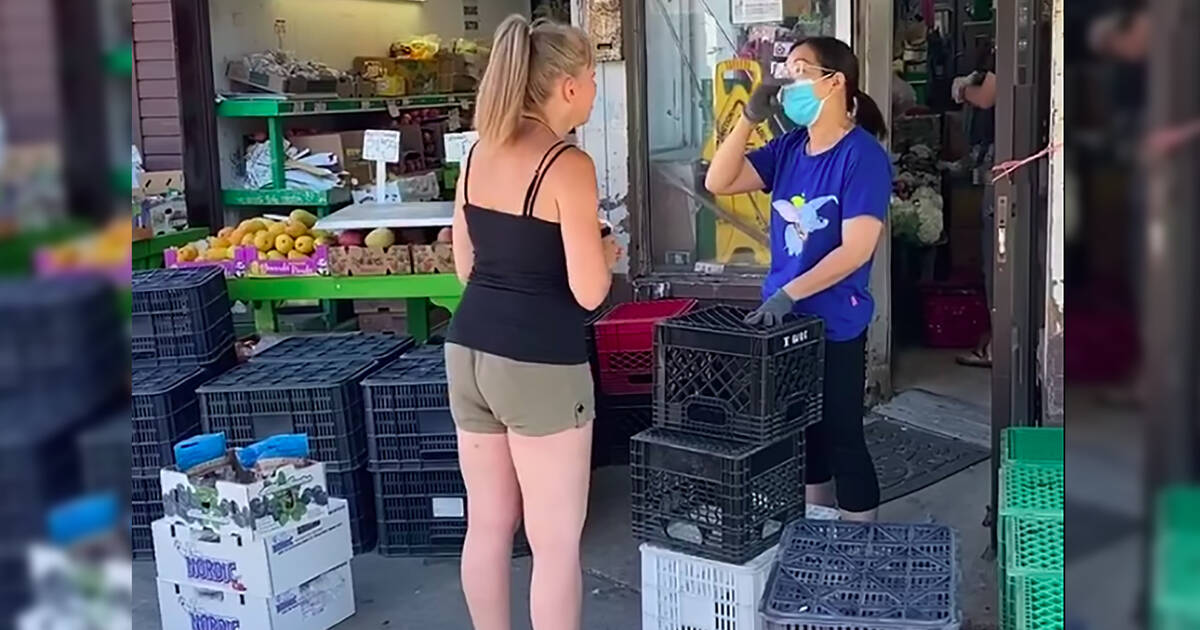 With masks becoming mandatory in most enclosed public spaces this week, face coverings are top of mind for many Toronto residents — though some are more willing to comply with the new bylaw than others.

Video footage has been circulating since Saturday of a smug shopper challenging staff at a local fruit market after she was denied entry for not wearing a face mask.

Shot by Toronto activist and prolific Twitter user Lanrick Bennett Jr., the video begins with an employee standing behind some milk crates in front of the Annex's beloved Bloor Fruit Market, talking to an apparent customer.

The employee can be heard telling the woman that businesses reserve the right to refuse service, which they do for any non-discriminatory reasons. The woman argues otherwise.

"You must listen to me," she says sternly to the masked staffer while gesturing with her hands. "It's a violation of this law — a bylaw, it's not a law, it's a bylaw."

Understood that this isn’t in effect until July 7th, but could we be collectively kinder to our community members on the other side of the door? Trying to keep themselves and their customers safe. Threatening to report this worker to @OntHumanRights is a stretch #InThisTogether https://t.co/7LcPc0UzVz pic.twitter.com/cHfvrMisLW

The store worker nods her head and says "Okay" repeatedly as the woman calmly goes on about how she will file a complaint if she's not allowed to shop there.

"You know I'm a good customer. You know I've been coming here for a long time. It's not fair. This is not a law."

The unidentified customer parts ways with the store employee politely after saying she'll return the following day, but the damage to her reputation had already been done: She'd been branded a Karen.

A perjorative term used toward white women (and increasingly people of any gender or race) who are "perceived to be entitled or demanding beyond the scope of what is considered appropriate or necessary," "Karen" has become a pointed insult when used against people whose names are not actually Karen.

"A common stereotype is that of a racist white woman who uses her privilege to demand her own way at the expense of others," writes Wikipedia of the slang term, which has skyrocketed in usage over the past year thanks in part to viral videos of histrionic white women calling the police on Black people for literally no reason.

"As I'd predicted earlier this week, Karenning is going to be in full effect. Where does this entitlement come from?" wrote one Toronto resident in response to Bennett Jr.'s video, which has now racked up more than 50,000 views between Twitter and Facebook.

Another Twitter user replied with video footage of a woman with the same hairstyle and same outfit yelling at a homeless individual over garbage in a park on the same day, suggesting that this mystery Karen was on the move.

It cannot be said for certain that the same woman appears in both videos, but the likeness is remarkable.

When asked about the incident on Saturday, Bloor Fruit Market said simply that "because we have limited English, we worry about we can't tell our meaning to our consumers."

"We're trying our best," wrote the business in an update on Facebook Monday morning. "Because we're all concentrating on the fruits and vegetables. With limited English, and when we communicate with our consumers, that may be a lot of misunderstandings.

"We're apologizing for that," the post continues. "We believe and care about all our consumers. Thank you so much for your support."

While Toronto's indoor mask bylaw does not come into effect until July 7, many stores across the city have had policies requiring face coverings in place for months.

"Wearing a mask or face covering is an additional measure we can take to reduce the spread of COVID-19 and keep each other safe," writes the City of Toronto of its forthcoming bylaw. "This means that, with some exceptions, all customers or visitors entering an indoor premise are required to wear a mask or face covering while inside."