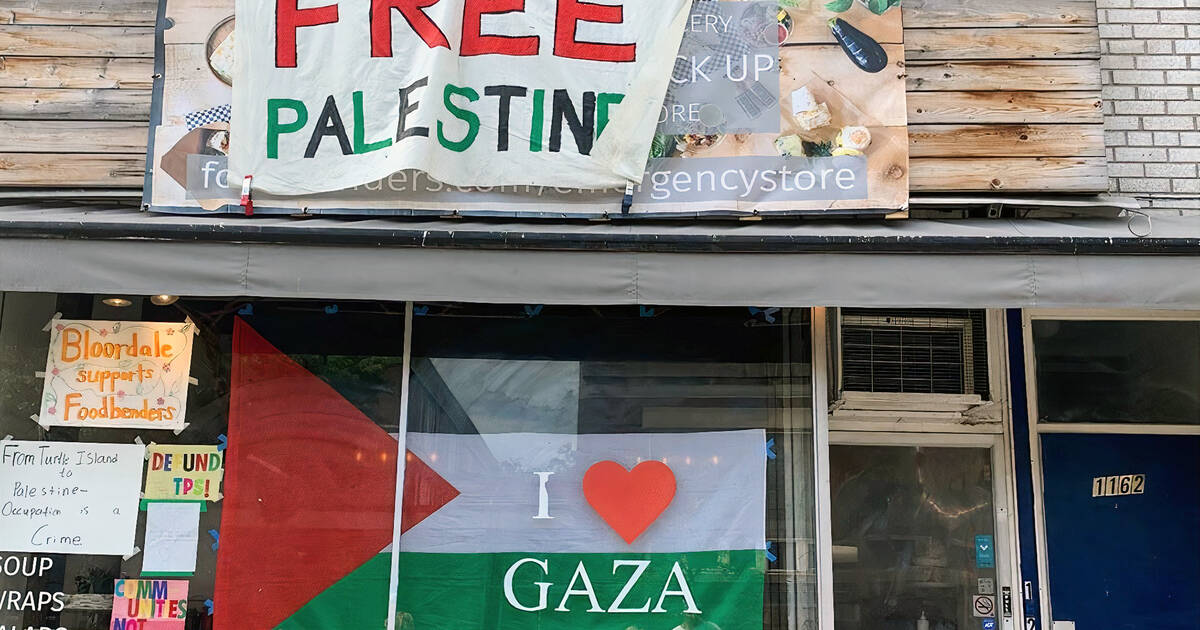 The saga of Foodbenders continues this week with the bizarrely political Toronto restaurant being booted from two of Canada's largest food takeout platforms.

Uber Canada and Ritual have both terminated their agreements with the healthy lunch spot in Bloordale following its second major scandal in less than a month.

Neither company has publicly specified why it decided to part ways with the popular takeout joint, but the fray comes not long after the restaurant was called out by members of the Jewish community for sharing content that many have called antisemetic.

Thank you, @ritual_co for joining @Uber__Canada in standing against antisemitism and hate. @DoorDash @skipthedishes, your move. pic.twitter.com/AwN9cGv15d

Foodbenders first courted controversy in June amid protests in which activists were (and still are) calling for Toronto Police to be defunded by erecting a sign outside its Bloor Street shop that read "No Justice, No Peace, F*ck the Police!"

The store's owner, who did not want her name revealed at the time due to ongoing harassment, said that she feared for her safety as random people started showing up to denounce her sandwich board.

Just as people were starting to forget about that hubub, she got the community riled up even more so than before by taking a very public stand against Zionism using the Foodbenders Instagram account.

Boycott Foodbenders in Toronto, Ontario. Apparently (((Zionists))) are not welcome in their store according to their Instagram posts. They also have some very antisemitic comments and doxxing going on on their instagram page pic.twitter.com/hfsUzQTXFi

B'nai Brith Canada and The Centre for Israel and Jewish Affairs (CIJA) are among the advocacy groups that have been calling upon community members to take action against Foodbenders, with the former organization stating that the restaurant "has used antisemitic tropes and posted pro-terrorist content on social media."

"On Instagram, the company has announced: '#zionistsnotwelcome.' Zionism is the belief that there ought to be a Jewish State situated in the Land of Israel, the indigenous Jewish homeland," explained B'nai Brith, Canada's oldest independent national Jewish organization, in a statement on Sunday.

"The 2018 Survey of Jews in Canada, conducted by Environics Research, York University and the University of Toronto, notes that Zionism is 'the normative form of Canadian Jewish identification.' Foodbenders has further alleged that 'Zionists are Nazis.'"

B'nai Brith has been urging its supporters in recent days to contact city officials and corporations such as Uber, Skipthedishes, DoorDash and Ritual to express their disdain.

#BREAKING: In direct response to advocacy by B’nai Brith, Uber Canada has confirmed that it will no longer deliver Foodbenders products. Foodbenders is a #Toronto restaurant that has posted antisemitic slurs and pro-terrorist content on social media. https://t.co/1D1C55l3Bi

The campaign appears to have worked: Foodbenders has now posted images of agreement termination letters from both Uber and Ritual on Instagram.

Pro-Israel organizations seem pleased with the victory, but pro-Palestine groups are now vowing to boycott both services in solidarity with Foodbenders.

"Very disappointing that @UberEats discontinued delivering for FoodBenders because they're pro-Palestine," wrote one Torontonian on Twitter. "I guess I'll be saving lots of money by not ordering from UberEats or requesting rides from @Uber_Canada! Don't trust Uber's performative activism :) #FreePalestine."

"Uber supports the Zionist extremists who are harassing Foodbenders store for speaking up about the rights of the Palestinians!" wrote another.

The Foodbenders owner did post a lengthy Instagram caption on Friday explaining that Zionists were not actually banned from the store.

"The first thing I will say is that I love Jewish people and they are welcome in my store. I have never said anything about Jewish people," reads the caption.

"I do not believe criticism of the Zionist political ideology, Israel or the Greater Israel Project, or pointing out its racist supremacist foundations amounts to criticism of the Jewish people or even Israeli citizens."

We are deeply concerned to hear that @Uber_Canada has terminated its agreement with Foodbenders, a fine Toronto eatery, for standing up for Palestinian rights and racial justice. The termination was signed by Pierre-Dimitri Gore-Coty. We look forward to #Uber’s timely response. https://t.co/whcnJryCiY

The restaurant owner continues to share screenshots of emailed death threats and horrifically hateful messages she's been receiving from critics, as well as photos of the vandalism to the store and mobs of people standing outside of it.

"I never want to participate in hate and I am always open to learning," she said late last week.

"Many Jewish people who know me have come forward privately to say they support me. I am asking them to publicly support me now because I don't deserve this."