31 things to do in Toronto this weekend 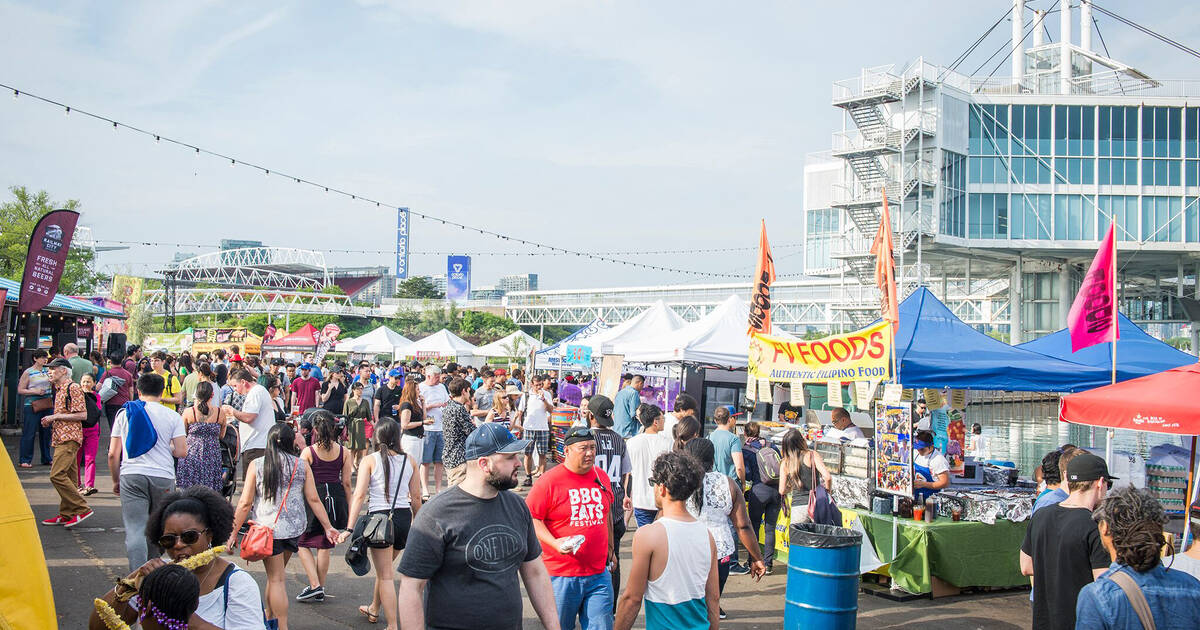 Weekend events in Toronto have lots of end-of-summer adventures to be had before it's back to the grind. Fan Expo is in full effect and there's lots of beer and barbecue to be had. There's plenty of festivals, parties, music and movies on, plus lots more CNE games, food and fun.

Fan Expo (August 22-25 @ Metro Toronto Convention Centre)
All-things fandom are on at this annual pop culture convention with special guests, a big market, workshops, performances and lots more.
Jonas Brothers (August 23 @ Scotiabank Arena)
The Jo Bros are keeping things cool as they arrive for a night of 80s-soaked fun and a slew of new music at part of their Happiness Begins tour.
Beer, Bourbon & BBQ (August 23-25 @ Ontario Place)
Ribs, chicken wings, corn, sausages and corn bread are just some of the grilled goodies on at this big festival dedicated to all-things barbecue.
Bricks & Glitter (August 23 - September 1 @ Multiple Venues)
Back again is this community arts festival dedicated to folks from across the rainbow with theatre, performances, music, parties and a makers market.
Tamil Fest (August 24-25 @ Markham Road)
One of the biggest street festivals of the year is back to celebrate traditional Tamil culture with food, music, dance, art and entertainment.
Pedestrian Sundays (August 25 @ Kensington Market)
Take a scroll through a car-free Kensington as Pedestrian Sundays embodies that summertime vibe with arts, music, games and food in the street.
8 80 Streets Danforth (August 23-24 @ Danforth Avenue)
Part of the Danforth is about to be transformed by a group of international tactical urbanists looking to give the street a big makeover.
TAIWANfest (August 23-25 @ Harbourfront Centre)
Free to attend, you can get your fill of Taiwanese cuisine with this food-focused festival that includes workshops, music, art, movies and dance.
Bicycle Music Festival (August 24 @ Trinity Bellwoods Park)
Grab your ride or borrow someone else's for this annual bicycle-powered music festival that includes performances and a group ride.
Korean Harvest Festival (August 24-25 @ Mel Lastman Square)
It's Korean Thanksgiving and this big annual festival is back to celebrate the occasion with traditional food, dance, performances, music and shopping.
Afro-Carib Fest (August 24-25 @ Albert Campbell Square)
Music, drum and dance performances, competitions, activities, traditional eats and an arts market are all part of this celebration of Afro-Caribbean culture.
Mabuhay Philippines Festival (August 24-25 @ Nathan Phillips Square)
Get your fill of traditional Filipino goodies at this annual festival with lots of vendors setting up shop, plus performances, music and shopping.
Community Sundays (August 25 @ MOCA)
The MOCA is welcoming in patrons to check out the museum and its many exhibitions free of charge for most of the day.
Toronto Cider Festival (August 23-24 @ Sherbourne Common)
Over 100 types of ciders from all over the region and beyond are on tap, alongside food pairings, music, games, contests and more.
Kanto Night Food Festival (August 23 - September 7 @ Market 707)
The first edition of this new, late-night Filipino street food festival kicks of with tons of yummy treats and beats being served up until 2 a.m.
Leslieville Beerfest (August 24 @ Dundas and Carlaw)
Part of Dundas Street East is shutting down for this big neighbourhood street festival, with local breweries serving up fresh suds, food and artisans.
Indie Fridays (August 23 @ Yonge-Dundas Square)
It's pop night at Indie Fridays with free performances by singer Madison Olds, the infectiously catchy Lo Lo and the irresistible duo Neon Dreams.
Plantain (August 24 @ Fort York Garrison Common)
New this year is a music festival dedicated to African, Caribbean, Latin and Canadian artists with a hug lineup of musicians from all over.
Pagan Altar (August 24 @ Lee's Palace)
Heavy metal riffs and booming drums make up the sound of this storied English band whose legacy in the genre spans more than forty years.
Showgirls (August 23 @ Revue Cinema)
Look who's appreciating now? The glitz and glam of this once-panned-now-beloved cult film is on in all its sexy glory.
Apocalypse Now (August 24-25 @ Fox Theatre)
Strap in for Francis Ford Coppola’s tripped-out take on war as Martin Sheen goes on a journey through the jungle to get a glimpse of Marlon Brando.
The Talented Mr. Ripley (August 25 @ Christie Pits)
The Christie Pits Film Festival is wrapping up its series of dynamic duos for another year with one, final free/PWYC outdoor screening.
A Brighter Summer Day (August 25 @ The Royal Cinema)
Eastern Promises is back to shine the spotlight on another film that brings the East to the West with Edward Yang's story of reckless youth.
Avengerz (August 23 @ The Rec Room)
Party it up, cosplay-style at the Rec Room's annual Fan Expo after-party with music, contests, screenings and plenty of dancing.
Promise Cherry Beach (August 25 @ Cherry Beach)
The second last (wow, summer is almost over) Promise is here with Toronto's own Mark Oliver spinning the house beats on the beach.
Frank Walker (August 25 @ Cabana Pool Bar)
DJ Frank Walker is here to provide the perfect soundtrack for a summer pool party with his smooth electro dance tunes.
Til Sunset Island Party (August 25 @ Artscape Gibraltar Point)
Toronto Pride is ready to put on one heck of an all-day party over on the Island with an under-the-sea theme, food, drinks, drag and lots more.
Afro-Caribbean Vegan Market (August 24 @ The 519 Community Center)
Back again is this market dedicated to Afro-Caribbean vegan goods of all sorts, like food, health and beauty products, clothes and lots more.
Deadstock Depot (August 24 @ 1269 Bloor Street West)
Classic streetwear brands are all part of this big flea with vintage designer clothing and accessories from Tommy Hilfiger, Champion, Kappa and more.
Toronto Stationery Show (August 25 @ The Great Hall)
Stationery enthusiasts, rejoice! This big show features a huge variety of stationery items from local vendors and designers from all over the city.
CNE (August 16 - September 2 @ Exhibition Place)
The CNE fun is just getting started as another weekend of fun arrives with rides, games, shows, shopping, food, drink and lots more.

by Lisa Power via blogTO
Posted by Arun Augustin at 6:44 AM