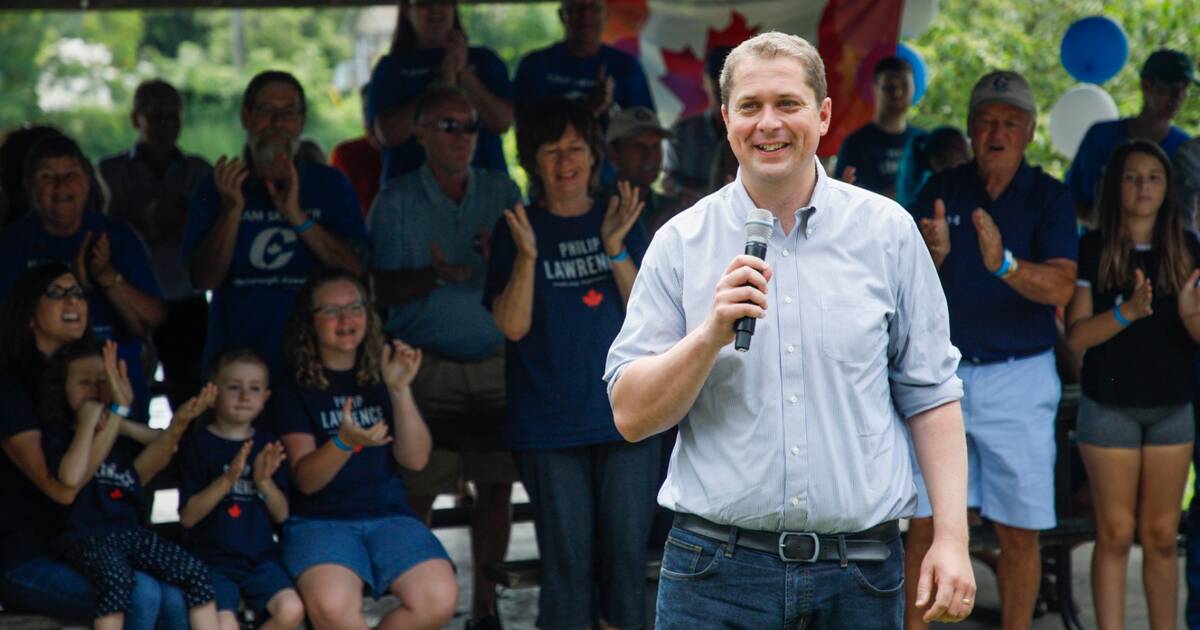 Andrew Scheer has some thoughts on gay marriage and they're not going over well with Canadians right now.

The Liberals just resurfaced a 2005 video of the Conservative leader this morning, and it's stirring up all kinds of controversy.

In the video, Scheer explains why he opposes the Civil Marriage Act— the act that legalized same-sex unions in Canada.

Public Safety Minister Ralph Goodale released the video in a tweet this morning, in which he also pressured the politician to "end his lifelong boycott of Pride events."

To be a leader for all Canadians, the Conservative Party leader should now end his lifelong boycott of Pride events and explain whether he would still deny same-sex couples the right to marry, as he said in Parliament. pic.twitter.com/5WEyja6Ov5

In the video, a 25 year-old Scheer says same-sex couples cannot have the "inherent feature" of marriage, because "they cannot commit to natural preocreation of children."

"How many legs would a dog have if you counted the tail as a leg?" he continues.

"The answer is just four...If this bill passes, governments and individual Canadians will be forced to call a tail a leg, nothing more. But that is not inconsequential, for its effect on marriage, such an integral building block of our society, would have far-reaching effects."

Mr. Scheer has been an MP for 5,533 days, but hasn't found a single day to celebrate Pride, and thus defend EVERY Canadian's human rights. Where better to begin than this weekend at his very own hometown Pride in Ottawa?

Brock Harrison, Director of Communications for Scheer, responded by saying "Mr. Scheer supports same-sex marriage as defined in law and as Prime Minister will, of course, uphold it," and he also pointed out some Liberals who have opposed gay marriage or voted against it in the past.

When the same-sex marriage vote took place a decade and a half ago, @AndrewScheer voted the way several Liberals did, including some who currently sit in the Liberal caucus and are running for re-election as Liberal candidates under Justin Trudeau. (1/3)

His list included Goodale. And yet, people seem to be pretty upset about the video.

We may have kids.

Neither I, my partner, or our relationship are akin to a dog’s tail.

You’ve continued to vote against major #LGBTQ rights since this.

Some are pointing out Scheer's definition of marriage as hypocritical, since same-sex marriages are not the only ones who can't and don't necessarily lead to reproduction.

Andrew Scheer is ridiculous. Does he then not recognize straight married couples who decide to not have kids? Or women who can't have kids in general? Because that is literally his argument against gay marriage. Hint: it's not a valid argument, he's just homophobic. #truthhurts https://t.co/x2nyWUkPFS

And many are using the opportunity to highlight Scheer's history of campaigning against LGBTQ2 rights.

Many are also saying it's possible Scheer's views have changed since the video, as it was filmed almost 15 years ago.

People have changed their opinion on gay marriage. Barack Obama did, I did. Did Andrew Scheer? He had better come out denouncing his previous views in a hurry. Even then, his refusal to attend pride events tells me not much has changed.

Still, if that is the case, Canadians are saying he'd better come out and say it soon, because #StopScheer is currently trending on Twitter in Toronto and the rest of Canada.

by Mira Miller via blogTO
Posted by Arun Augustin at 12:05 PM