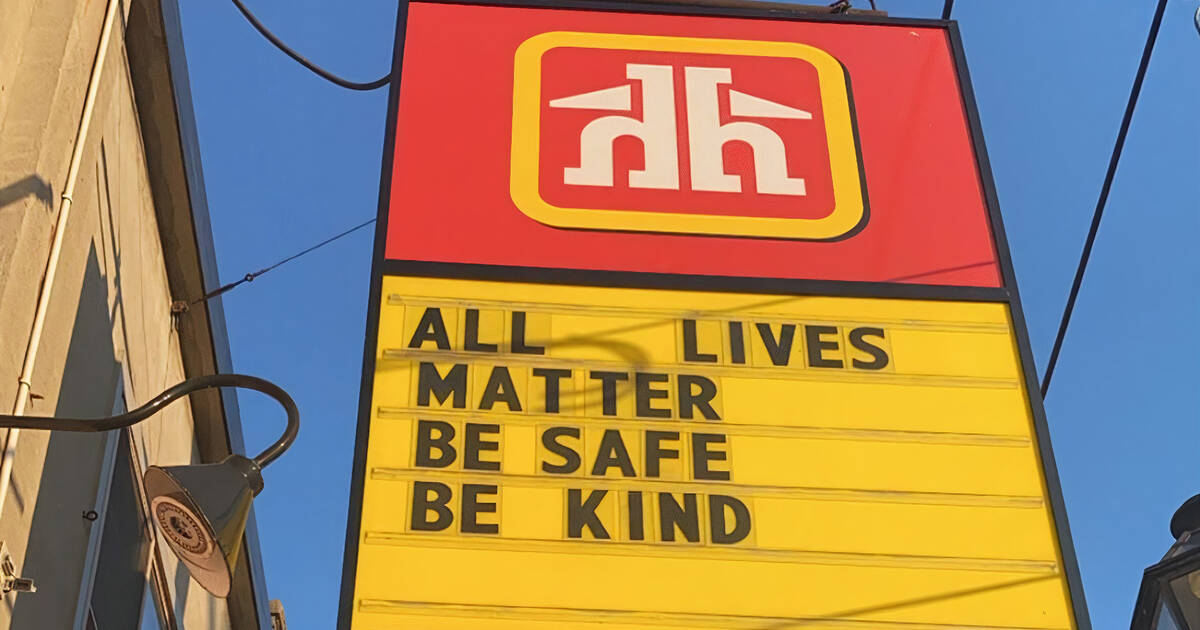 A Toronto hardware store is facing a world of backlash today after a photo of the lightbox sign above its doors — which read "all lives matter" up until Tuesday at Pollocks Home Hardware— was widely circulated online.

The saying, which is used to criticize and detract from the Black Lives Matter movement, is one that has come to be associated with a certain type of individual (read: racist scum) amid the protests against anti-Black racism that have been taking place around the globe.

So, understandably, locals were beyond upset to see it hanging overhead Pollocks Home Hardware, a family-owned shop that has resided on Roncesvalles near Howard Park for more than 85 years.

"I actually can’t believe I saw this — seen at @roncesvillage How has this not been addressed?" the individual who snapped the photo of the sign — which also read "be safe" and "be kind" — wrote in an Instagram caption.

"This sign is extremely inappropriate toward Black community members that are fighting against their people being killed and brutalized. Or do you only care about your white customers?" another stated in the comments section, tagging Home Hardware.

The Home Hardware brand eventually replied to let users know that the store had been contacted and the sign's message removed as of Tuesday evening.

Though Len McAuley, the owner of the location, didn't want to comment on the incident as of yet, he did tell blogTO that he is apologetic and "totally confused" by the backlash, as he genuinely meant well with his message.

"It just didn't come out that way," he said.

McAuley, who didn't seem to fully understand the implications of the slogan, also posted a statement to the Pollocks Home Hardware website, saying "I am truly sorry for any hurt I have caused. I am now taking a pause to recognize the impact of my mistake. This was done in ignorance, not in malice."

"I take full responsibility for my mistake, and am actively striving to do better by listening and learning."

Still, it seems that people are rightfully seeking far more explanation and reconciliation from the store.