Montreal is removing benches that stigmatize homelessness so will Toronto be next? 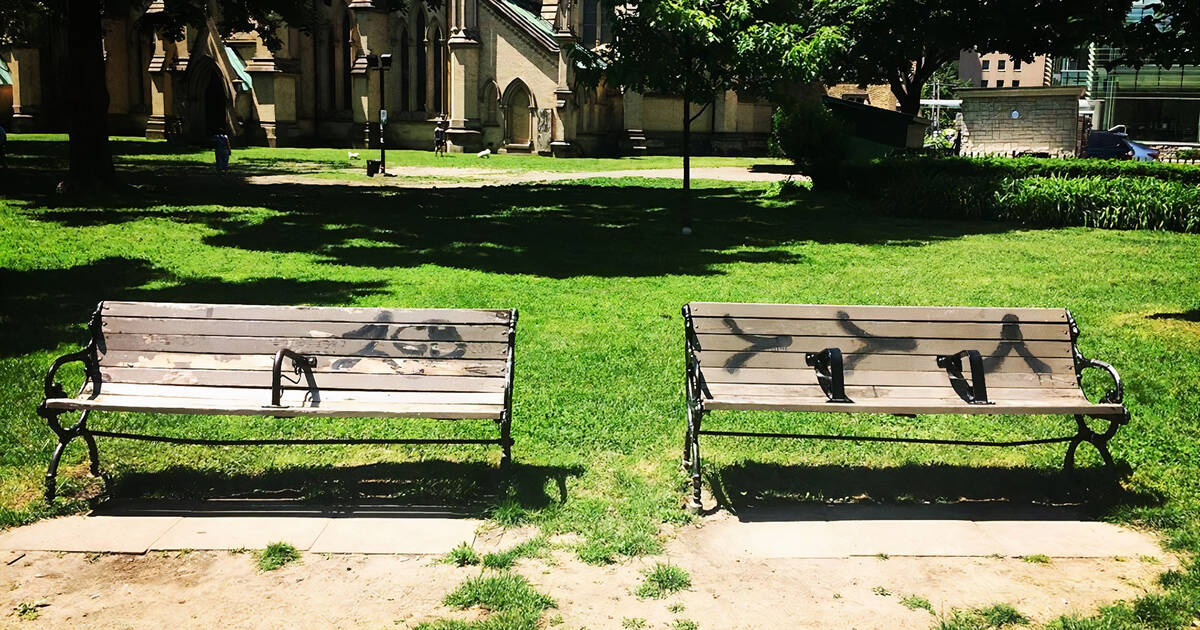 Part of the reason this year has been so tumultuous is not only because of the pandemic itself, but also because it has served to emphasize existing social inequities that the most privileged among us are often able to ignore.

With COVID-19 disproportionately affecting low-income neighbourhoods, racialized communities and the homeless in Toronto, more people are finally looking a little closer at socio-economic and other types of disparities.

Residents have taken issue with things like the lack of proper health and safety measures in the city's shelters amid the health crisis, the fact that people were being targeted by bylaw officers for resting (or sleeping) on park benches, and the fact that Torontonians can now do yoga in outdoor bubbles to keep safe from the virus, but we somehow can't use the same concept to house those experiencing homelessness.

So as homeless shelters and encampments suffer outbreaks and closures, we are seeing Toronto Police ticketing homeless people for social distancing infractions and the use of park benches. This is wonderful. Truly in the spirit of the time. I just hang my head, low.

Attention has also been drawn to things like hostile architecture, a sometimes subtle but nefarious tactic that city planners use to keep homeless off of things like benches and ventilation grates.

Benches and other surfaces are often built in certain shapes and with specific features that deter citizens from sleeping on them, whether it be superfluous extra armrests in the middle of benches or spikes that resemble those businesses use to keep pigeons off of window ledges and signage.

I think a lot about going into Toronto some night with concrete saws and just ripping apart every instance of hostile architecture I see https://t.co/blvGgH686w

Canadian cities such as Montreal are finally making moves to get rid of what have been deemed "anti-sleep benches" that were just installed in a public square earlier this week.  There has been ample public backlash to their design.

"These are the old benches set up by the previous administration that I have extensively condemned... this bench has no place in the vicinity of Square Cabot because it contributes to the stigmatization of people experiencing homelessness," Montreal Mayor Valérie Plante said in a statement on the matter, adding that the city needs to "develop better reflexes on the installation of public furniture to be more inclusive."

These new designs for benches are horrible. Why? They are designed to make sure no one can sleep on it (aka homeless people) when in fact the resources for them are very small. Also resting for only 15 mins? Wtf some people need more resting time period. https://t.co/Zz5YWGWONl

Toronto, though, has yet to take similar steps — it has actually gone as far as completely removing benches from areas in an attempt to prevent homeless residents from sleeping and hanging out there.

Some residents have started petitions as a result, while others have begun documenting such types of architecture across the city, which is prevalent everywhere from Kensington Market to Church and Wellesley to the dog fountain at Berczy Park.

Toronto. These devices (left) keep homeless people from sleeping on the grates to avoid freezing to death (right). pic.twitter.com/3oxWOLRHJn

If citizens keep an eye out, they may be able to notice concrete or metal protrusions that make surfaces uncomfortable to lay or sit on, or even flashing lights, sprinklers and sounds that make sleep impossible.

This type of design has been used to prevent certain behaviours of residents (skateboarding, loitering, sleeping) in cities around the world for decades — so long that it goes unnoticed by most, unless of course they end up in a position where they are looking for somewhere to lay their head for the night.

But those that do notice find the strategy not only harmful, violent and just plain unpleasant to look at, but also a waste of resources when they could be put toward things like actually addressing homelessness and the housing crisis in the city.

It is also somewhat contradictory to very the concept of shared public space for community use.

Prime example of hostile architecture in toronto’s chinatown; anti-homeless flashing lights at 346 spadina avenue, a building at the edge of a Kensington market entrance. pic.twitter.com/yEB9yNc8to

With people continuing to speak out about the issue in a time when the Toronto's most vulnerable are perhaps more at risk than ever — and with places like Montreal finally getting rid of some of its intentional hostile environmental features — it remains to be seen if and how Toronto (and other cities nationwide) will react or change its design strategies for public spaces moving forward.