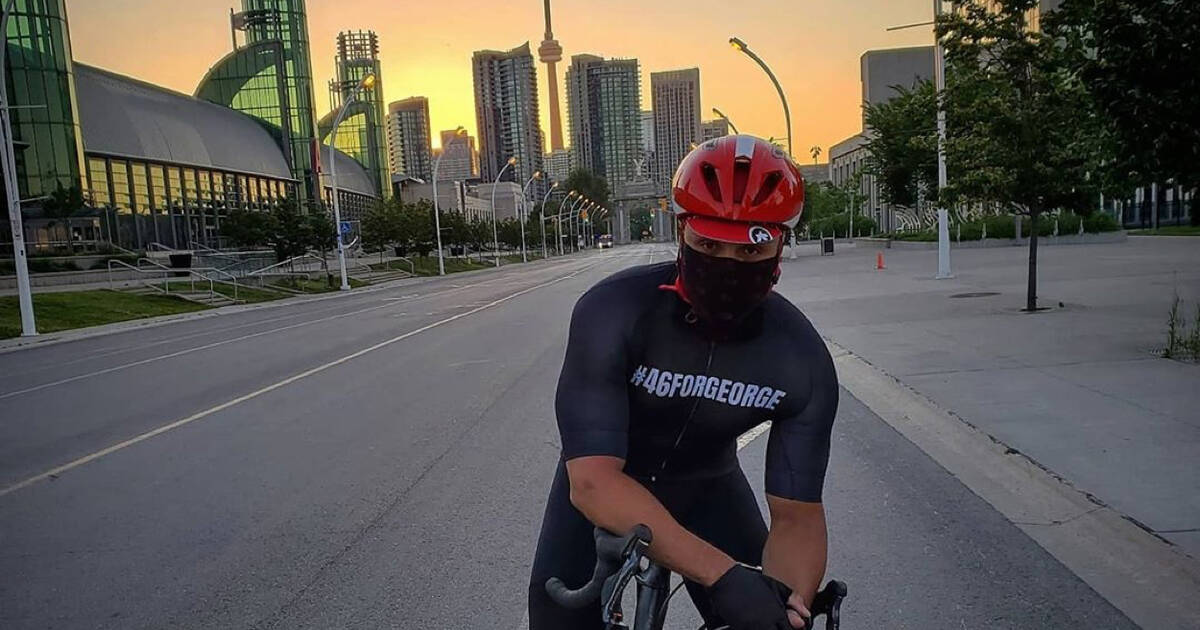 Toronto cyclist Matthew Cuesta's 46-day ride for George Floyd is coming to an end and now he is inviting everyone to join him on his last day.

Cuesta is cycling for 46 kilometres or running for 4.6 kilometres every day, for 46 days — one day for each year Floyd lived.

His final day is July 14 at 7 a.m. and all are welcome to join this ride, a loop around the exhibition grounds. The ride will start at Lakeshore West and Fleet Street. It is not a group ride and cyclists must practice social distancing and are encouraged to wear masks.

Every morning Cuesta wakes up around 4 a.m. and heads out for 5 or 5:30 a.m. This brutal schedule is meant to push him physically and mentally.

So far, the ride is achieving its goal of sparking “uncomfortable conversations.”

Cuesta has talked with a woman who is rediscovering her Indigenous roots; a Toronto homicide detective; Toronto councillor Brad Bradford, and the CEO of a bank.

Sometimes the comments from people can weigh on him.

“I can go past physical pain, I can push past that — the mental is a lot worse,” he says. “You become a sponge for people’s emotions, not only the happiness and the encouragement but the anger and the sadness as well.”

One comment on social media, in particular, impacted him. When he was trying to promote the George Floyd ride on Strava, a man posted on social media that there are already enough platforms to discuss racism and he used his rides to escape these discussions.

Cuesta was pulled over by the OPP 11 years ago, and the officer claimed he was talking on his cell phone. Things escalated quickly and the officer asked to search his car.

“I was young and I was scared so I let him search my car.” Cuesta says the incident ended without charges but it made him concerned about future encounters with police.

“It is just that little thing in your back of your head,” he says.

Overall, Cuesta is happy with the support he has received and the people he has met.

“It (the ride) is definitely doing what it is supposed to do.”

by Karen Longwell via blogTO
Posted by Arun Augustin at 5:48 AM