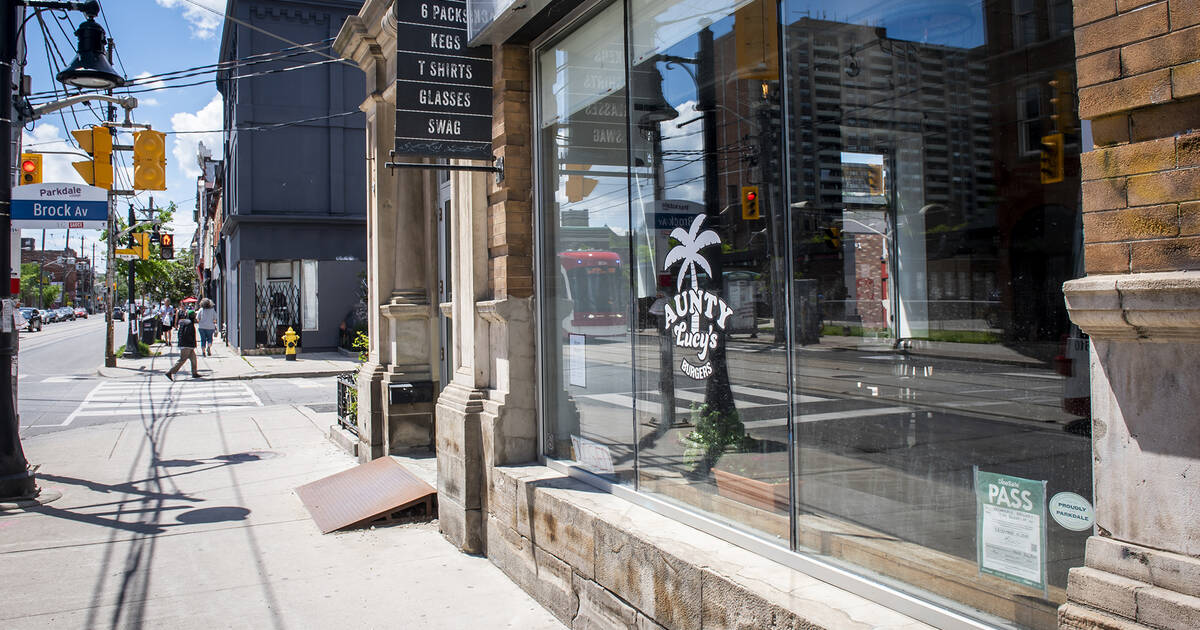 After being accused of abruptly and unfairly putting an end to burgeoning Toronto burger spot Aunty Lucy's, Duggan's Brewery owner Mike Duggan is speaking out about the recent drama between him and the popular pop-up restaurant that was utilizing his kitchen space.

Fans were surprised and disappointed to hear that Aunty Lucy's would be closing down after Canada Day. The popular new restaurant shared the news in an Instagram post on Tuesday that detailed the very sudden situation.

"The establishment we rented the kitchen of and are operating out of at 1346 Queen St W. has hit us with an extremely unmanageable rent increase of 10x from our previous agreement. His reasoning being he didn’t expect us to do as well and now wants more money," the post read, adding that the team is looking for a new home to operate out of.

Hi all! It pains us to say this but the establishment we rented the kitchen of and are operating out of at 1346 Queen St W. has hit us with an extremely unmanageable rent increase of 10x from our previous agreement. His reasoning being he didn’t expect us to do as well and now wants more money. We tried to meet the gentleman at a reasonable price point after speaking to my advisors, and other business owners and mentors and they all gave me the same advice that the new price he was asking for is greedy and unacceptable. Even after we expressed that he still didn’t want to budge which is fine. He then told us we could take a week to transition out of the space as we find another temporary location for July, August, and potentially September at which point we hope to have found a permanent location. I was okay with this one week period to transition out and had no issues with it. Then I woke up this morning to a text that read; we had to stop business after close tomorrow ?! Which was a 360 from the slow transition and week move out that he gave us initially. He himself said he didn’t want to cut our legs out from under us and then proceeded to do just that. I say all that to say we will be open tomorrow for Canada day, and then are currently looking into our options to hopefully insure that there is no cut off in our service. Myself and the team will keep you updated, thank you all! ✨🙏🏿 #auntylucysburgers

But Duggan says the claims are "complete lies," and that the pop-up was operating free of charge, save for covering some of the utility expenses. When these expenses ended up far exceeding the amount paid due to how busy Aunty Lucy's became, Duggan says he asked for more money to cover them.

He insists that Lucy's proprietor Chieff Bosompra did not pay any actual rent, and that the two had agreed to a one-month pop-up only.

"They increased my bills $2,600 during the month of June. They were more busy than I thought when I first did the calculations... so not only has he gotten a free space and the market value that comes with it, I also paid over $2,000 out of my pocket," Duggan says.

Duggan likewise made a post about the situation on social media, saying he was trying to change the terms of the agreement moving forward if Aunty Lucy's wanted to continue contracting the space, given the extra costs.

"We are tenants and as such pay rent, substantial rent and business taxes for the privilege of operating a business in the city. We don't own the building, we are not independently wealthy," Duggan's said in an Instagram caption.

"We were told by Aunt Lucy's that that they wanted to stay but are not willing to pay ANY RENT (and it turns out any of the extra costs we incurred for them being here)."

Does anyone still care about truth?? Seems our friends at Aunt Lucy's dont and have decided to invent their own. We invited them in at the heat of the epidemic. RENT FREE, please just cover the utilities they might generate, around, $600 a month we thought. We agreed to a one month pop up. A good deal, a steal, just ask anyone in the business. Turns out they were so successful they actually used around $2500 in utilities, garbage, lots of gas etc in costs for the month, that's a lot of burgers. Didnt know them at the time but in these times you just take a chance and try and help out everyone. And we did. To date they have only paid $500 but we both have known about the extra costs for a while now. We have stayed open selling our locally made beers and ale throughout this, and many of you know its been pretty much a one man show. We didnt deliver, we make barley enough for Parkdale so we chose to stay very local. The end of the one month pop arrives and they thought it would be very profitable to stay here and continue to operate. RENT FREE. We are tenants and as such pay rent, substantial rent and business taxes for the privilege of operating a business in the city. We dont own the building, we are not independently wealthy. We were told by Aunt Lucy's that that they wanted to stay but are not willing to pay ANY RENT (and it turns out any of the extra costs we incurred for them being here). Well, so who is going to help pay the landlord? Seems not Aunt Lucy's. By not allowing them to remain here rent free for another month (and not allowing us, the tenant, access to our own kitchen), we where told by them 'its not the climate to be strong arming a young black business...' Really, we now have to subsidize their very profitable business because they are young and black?? Here at the brewery we dont see colour. Those of you that know us know this to true. It's about paying your fair share, plain and simple.

A post shared by Duggan's Brewery Parkdale (@duggansbreweryparkdale) on Jul 1, 2020 at 8:03am PDT

But Bosompra says that he did offer to pay thousands more to cover the bills — although not quite the overpriced amount of $5,000 — and offered additional alternative solutions, such as giving customers special deals that included Duggan's beer and helping the brewery with its social media free of charge.

He feels that the new amount Duggan's was seeking was based solely on how successful Aunty Lucy's has been and that being asked to vacate the premises on such short notice was unrealistic.

He likewise says that Duggan's most recent account of the circumstances is false and that Duggan declined to sign a proper contract that Bosompra had written up.

The posts by both Aunty Lucy's and Duggan's have incited a flurry of feedback, dividing people who are defending either one business or the other.

"Quit acting like y'all did someone a favour, you're bullies not heroes. A black business succeeded past your expectations of struggle, so you strong arm them by setting a rent expectation you knew couldn't be met instead of being reasonable," one user wrote to Duggan's.

"Did you say Free rent with a cap of $600 in utilities? Above that and rent will kick in at 1,000. Or Did you say Free rent with $600 in utilities and 2% of total sales so your kick back would be scalable to the success of the business? Sounds like your lack of business sense and assumption that this business would struggle like yours, is what bit you in the behind..... this is an expensive lesson, but it was yours to learn," another added.

Still, others vowed to support Duggan's in this "era of cancel culture," saying that no one should speculate on what the "right" amount of a rent increase in this situation should be.

"Once [Aunty Lucy's] starts paying the brewery's bills, maybe then they can comment on what they can or can't afford."

While the tension between the two parties continues to burn and Bosompra actively looks for another ghost kitchen to operate of, one thing's for certain: Aunty Lucy's certainly won't be back in its original Parkdale spot ever again.