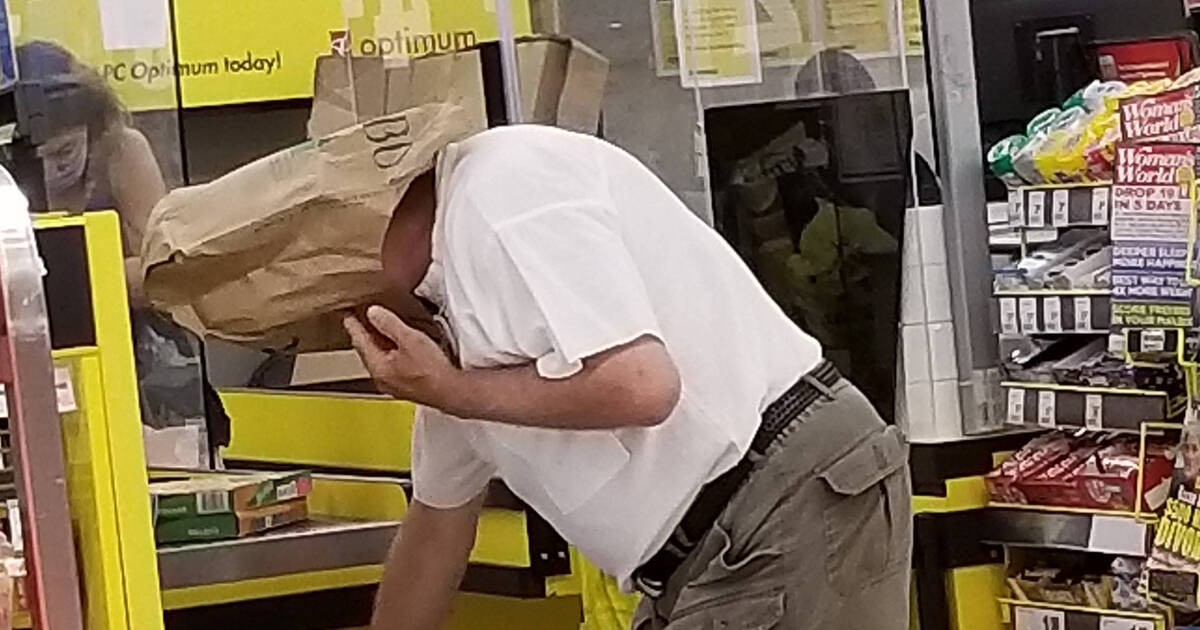 This week in distractions from all of the horrible things going on in the world right now, an unidentified man is bringing smiles to the faces and LOLs to the keyboards of thousands of Toronto residents with his ridiculous COVID-19 mask.

An image of the mysterious gentleman wearing an LCBO bag on his head first appeared in the Weird Toronto Facebook group on Sunday evening with the caption "I mean, it's better than nothing."

That photo, posted by a woman who has not yet responded to a request for comment, shows a man with a brown paper bag from the liquor store on his head, holes cut out for eyes, posing jauntily on a sidewalk.

It's more of a "heh" kind of image than a "HAHAHAHA," but 102 people liked it and presumably had a quick chuckle. 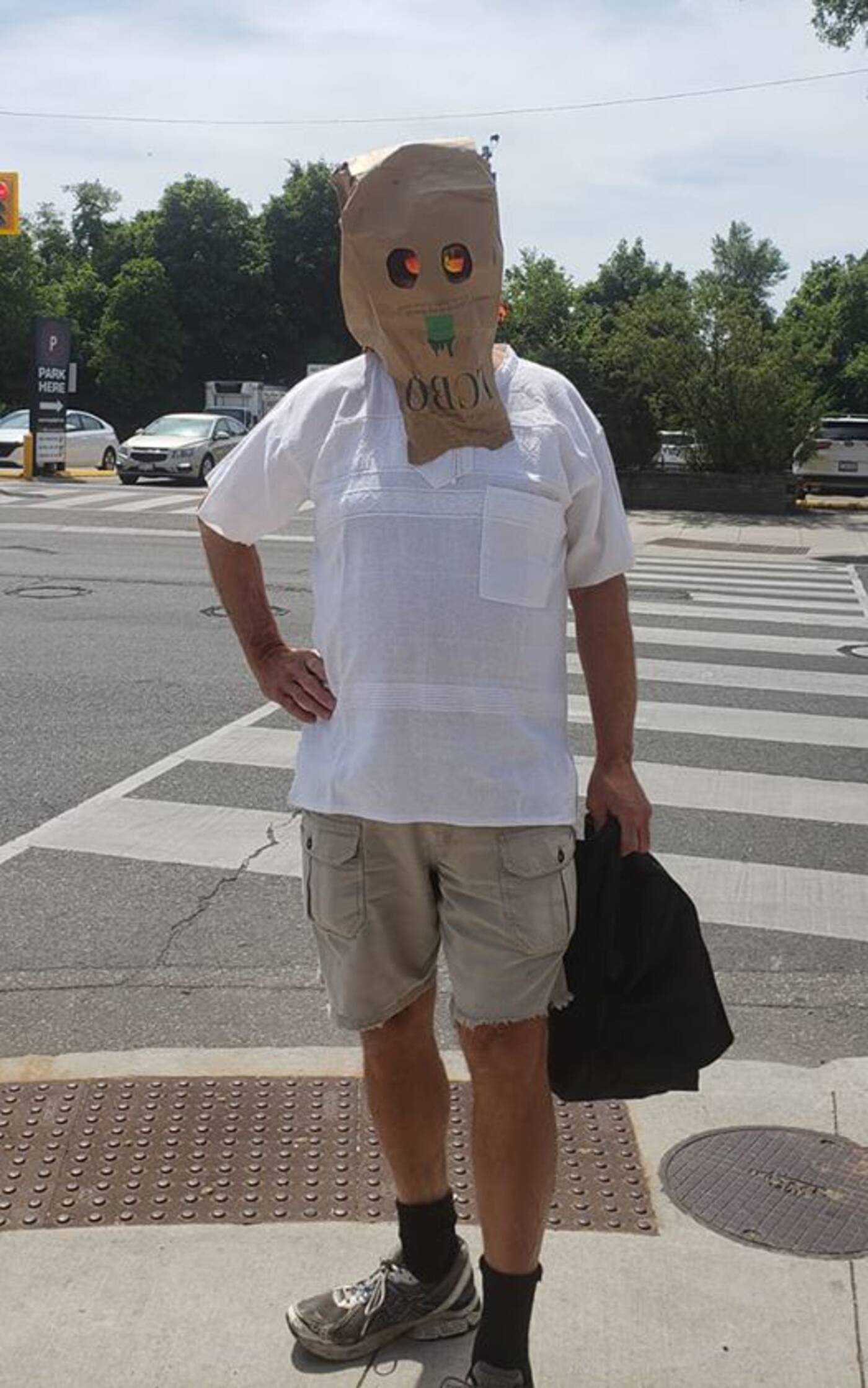 Then, on July 7, just as Toronto's new mandatory mask bylaw was coming into effect, another photo of the man emerged on Reddit — this one, an action shot.

Taken and published by Redditor DistantEW, the photo appears to show the man loading frozen pizzas onto a grocery store checkout belt while holding the bag in place on his head.

"One customer's mandatory 'mask' this morning at No Frills" read the title of the post, which blew up almost immediately after it hit the r/Toronto subreddit around 11 a.m. on Tuesday.

DistantEW told blogTO that the photo was taken at the Nicholson's No Frills near Runnymede and Bloor earlier Tuesday morning.

"The man was checking out his groceries. One person stopped and took a photo of him straight on, he sort of posed for it. I just snapped a quick photo," he said. "I saw a few people react but he was checking out by the time I was there." 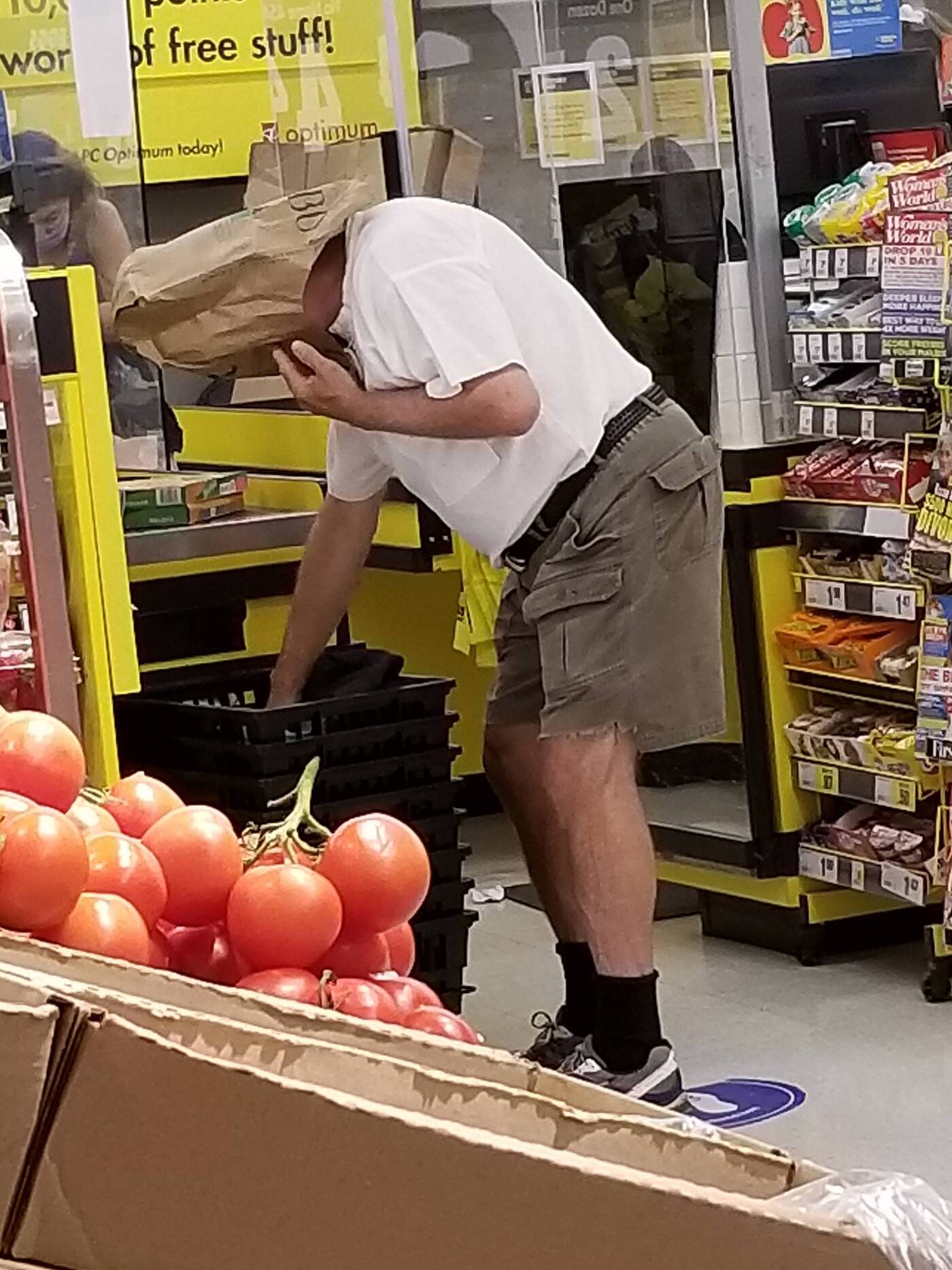 Like many other people who've seen the photos online, DistantEW doesn't think the man was seriously trying to use the LCBO bag as a mask.

"I'm assuming it was a joke or a statement on mandatory masks," he said. "The No Frills was giving out masks at the door so he clearly made the choice."

Most people commenting in the Reddit thread seemed to get a kick out of the stunt (if that's what it was), making jokes about Shia LeBoef, Thomas Pynchon, Maple Leafs fans, the Trailer Park Boys, dad behaviour and The Sims.

"Looks like he designed it pretty well," noted one commenter. "Like did he even cut around his shoulders for a better fit? Ha."

"Fits the definition of non-medical face covering," wrote another. "Prevents him from spreading it if he has it. Props to that guy for being creative."