Toronto neighbourhoods oppose U of T's plans for landmark building 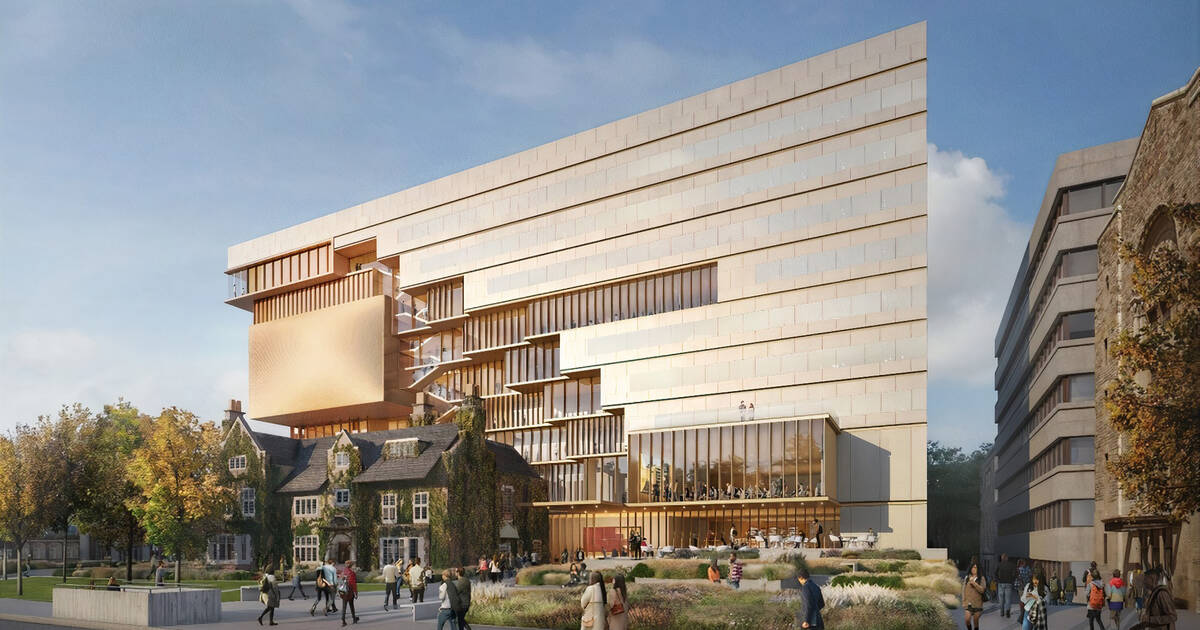 A massive construction project forthcoming from the University of Toronto has a lot of the city talking right now — but not for good reasons.

Last year, the institution unveiled details of its plans for a new nine-story multi-use building at 90 Queen's Park Crescent, which is set to take the place of the old McLaughlin Planetarium that shuttered back in 1995.

I'm stunned. Behemoth that overpowers everything in sight. From the Dog's Breakfast School of Architecture,.

In stark contrast to the brutalist dome structure that residents rallied to try and save, the new Centre for Civilizations, Cultures and Cities building will be immense and ultramodern, with sleek, sharp geometry and a striking metallic exterior.

Adjacent to the ROM, the hub will also have sustainability features and will include an event space and music recital hall, room for the multiple school faculties, and will incorporate U of T's existing Falconer Hall law building — which is 120 years old — into its design.

But, it seems that not just one, but eight associations representing nearby citizens are not exactly thrilled with the building's proposal or how its distinctive architecture will (or, rather, won't) mesh with the historic landmarks in the area.

It’s hideous.
Toronto architecture has become lazy and boring. Set in the same block as the ROM, this is awful.

In an open letter to Ward 11 University-Rosedale Councillor Mike Layton, the Coalition points out the importance of Queen's Park as "Toronto's most prestigious and pristine Heritage District," calling U of T's design (which comes from architects Diller Scofidio + Renfro, who were behind the High Line in New York City and The Broad in L.A.)  a "travesty" that would dramatically affect the harmony of the neighbourhood.

Their issue is not with the idea of a new build on the property, but with the fact that the building being proposed is aesthetically very incongruent with the neighbouring structures (aside from the ROM itself), which were built between 1901 and 1917 in a similar height, style and scale.

"This proposal adds nothing to this important location — in fact, it’s disruptive and out of place. It’s a brash and flashy look-at-me ‘starchitect’s’ structure that is an aggressive 2.5 times the height of the ROM’s Heritage Wings," the letter reads.

"Also, the U of T proposal won’t preserve a single tree of the mature canopy on site. In short, this proposal violates the very essence of Queen’s Park."

Join me and @CityPlanTO for the second public meeting for 78-90 Queen’s Park, July 14th. Working group has been meeting over the past 6 months and applicant (UofT) will present their revised designs. https://t.co/uEu3WLvUDq

The organization, which represents 40,000 Torontonians in total, is preparing to fight the plans at the final public consultation for the building, taking place online on July 14.

Annex Residents' Association Director Elizabeth Sisam tells blogTO that as the proposal stands now, the building would effectively "destroy the cultural landscape" of the neighbourhood, which other new construction in the area has managed to respect and preserve.

"Recent projects like the Gardiner Museum, Jackman Law Library, and Koerner Hall of the RCM have respected the precinct and addressed the important considerations this site demands," Sisam says, noting the U of T building's "jarring appearance, height and bulk."

Concerned community members will have to wait until July 14 to see if there are any new updates to the proposal, and whether or not their input will be heard.

by Becky Robertson via blogTO
Posted by Arun Augustin at 4:48 PM