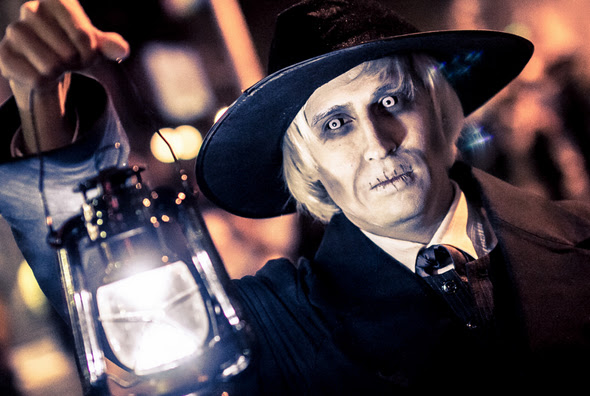 Halloween party options in Toronto for 2015 give you plenty of excuses to don your Walking Dead gear or other creative costume. With everything from a massive party at the Metro Toronto Convention Centre to warehouse parties, you'll have every excuse to rock your favourite costume. Stick to the age old rule of not taking candy (or drinks) from strangers and you'll have a good time.

Here's our guide to Halloween parties in Toronto for 2015.

Ghost Hole VII | The Jam Factory | October 31 | 8 p.m.
If you want to do more on Halloween than throw back shots and perfect your Thriller dance moves, The Jam Factory is where to be. The haunted art house will bring performers, installations and art works to the Riverside location for a night of paranormal entertainment.

6th Annual Fresh Prince Of Bel-Air 90's Halloween | 99 Sudbury | October 31 | 10 p.m. | $30
Suit up in your finest fluorescent track suit and get ready to party like the Fresh Prince himself. 99 Sudbury will be hosting the 6th instalment of the iconic Fresh Prince of Bel-Air Halloween bash. Expect to find the masses perfecting the Carlton to old school '90s hits.

Hotnuts Halloqween with Poisonous Relationship | The Garrison | October 31 | 10:30 p.m. | $10
If you like to go all out with your Halloween costume, the Hotnuts party is your best bet. This event is all spectacle and is known for hosting the most outrageously outfitted partygoers in the city. This year's theme is Nightmare on Sesame Street, so expect to see your childhood terrors come to life.

Freakout! | The Phoenix | October 31 | 10 p.m. | $36.66
The Phoenix is the destination for music lovers this year. They will be hosting their annual Halloween rave, with Black Sun Empire, Ed Rush & Optical, FuntCase, Loadstar and more performing. At this kind of event you can throw on any old costume; the music will take centre stage no matter what you're wearing.

Church Street Halloween Party | Church Street | October 31 | 6:30 p.m. | Free
The city's biggest Halloween extravaganza is back for another year, taking over Church Street for a night of ghoulish festivities. With the street closed from Alexander to Gloucester, there's plenty of partying to be done. If you don't have the funds to dip into every bar on the block, the street is just as lively (if not more).

Did we miss a noteworthy ghoulish throwdown? Let us know in the comments.

by Alice Prendergast via blogTO
Posted by Arun Augustin at 8:43 AM