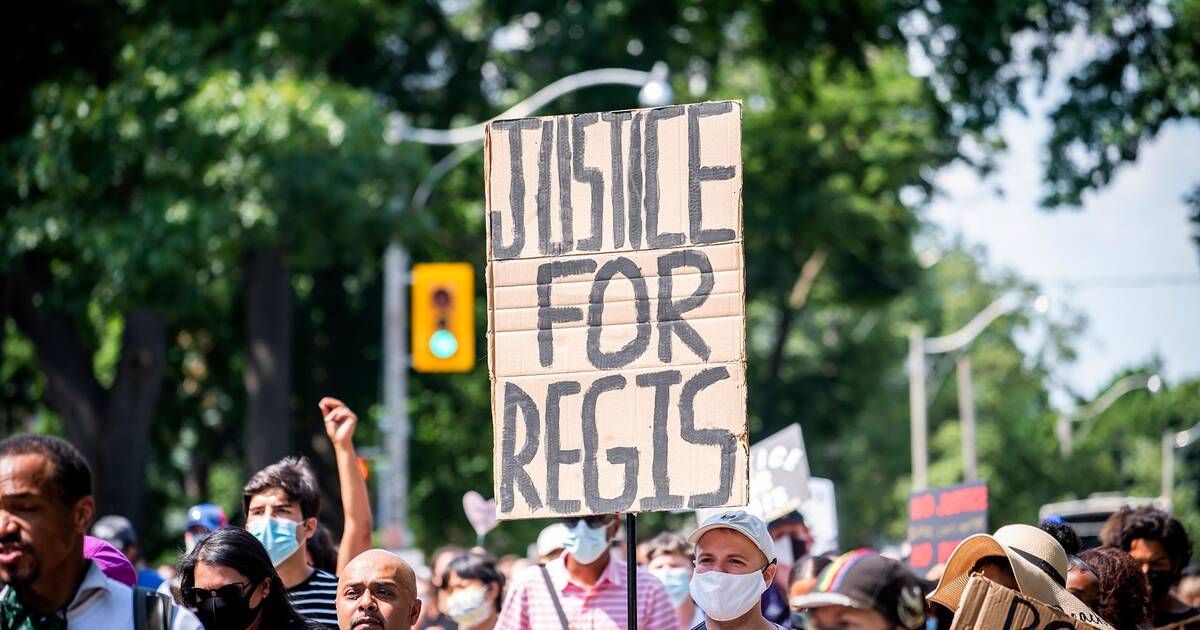 Ontario's police watchdog has finally released the results of the investigation into the death of Regis Korchinski-Paquet, the 29-year-old woman who fell to her death from a Toronto apartment balcony during an interaction with police earlier this summer.

In a statement published Wednesday morning, the Special Investigations Unit said they found no reasonable grounds to criminally charge any Toronto Police Service officer in connection with her death.

On May 27, Korchinski-Paquet tragically fell from the balcony of a 24th floor apartment in Toronto after her family called the police to come assist her as she was experiencing a mental health crisis as well as an epileptic seizure.

They asked officers to transport her to CAMH (Centre for Addiction and Mental Health) upon their arrival, but she returned inside the apartment to use the bathroom and was followed by several officers.

A short time later, Korchinski-Paquet fell from the balcony and was pronounced dead at the scene.

The tragedy provoked outrage among the public and contributed to increased calls to defund the police in Toronto, with many rumours circulating over whether she had been pushed by police.

It also led many to question whether police are properly equipped to handle situations where people are clearly experiencing severe mental distress.

According to the SIU, six police officers were in and around the apartment at the time of the fall, including one subject officer who had the most interactions with Korchinski-Paquet.

The SIU interviewed each of these officers in addition to 15 civilian witnesses, including Korchinski-Paquet's mother and brother, and they also obtained a statement from her father.

The investigation also included a deep-dive into scene photos, 911 call recordings, audio recordings from in-car camera systems of police cruisers, security camera video recordings from the apartment building in which the incident occurred, records from the TPS and two post-mortem reports.

"Based on his review of the evidence, the Director of the Special Investigations Unit, Joseph Martino, has determined there are no reasonable grounds to believe that any of the officers committed a criminal offence in connection with Ms. Korchinski-Paquet's death," notes the report.

"The evidence indicates that no one other than Ms. Korchinski-Paquet was on the balcony when she scaled over the railing and attempted to sidestep along the outer ledge over to her neighbour's balcony, lost her balance, and fell."

The SIU also posted a 25-minute video statement from Martino on his decision on the matter, which is an unprecedented step in an investigation of this kind.

This is likely the result of ongoing demands for increased transparency throughout this investigation.

Earlier today, Black-Femme Activist group Not Another Black Life posted on Twitter asking Torontonians to head over to 100 High Park at 4 p.m. today, where the memorial for Korchinski-Paquet was held, to provide support for her family.

URGENT! Folks needed @ 100 High Park at 4pm today, August 26th, located where the memorial for Regis was held. The family of Regis Korchinski-Paquet is awaiting the SIU report on the tragic death of Regis. They are asking that folks come and support them at this time. 1/2 pic.twitter.com/2KyYyQR519

"We are anticipating the worse in the case of the SIU," they wrote. "We know that ALL cops protect cops & we need to support the family in the case that Justice is not served & this becomes another cover up."