Should everyone be worried about students taking the TTC back to school? 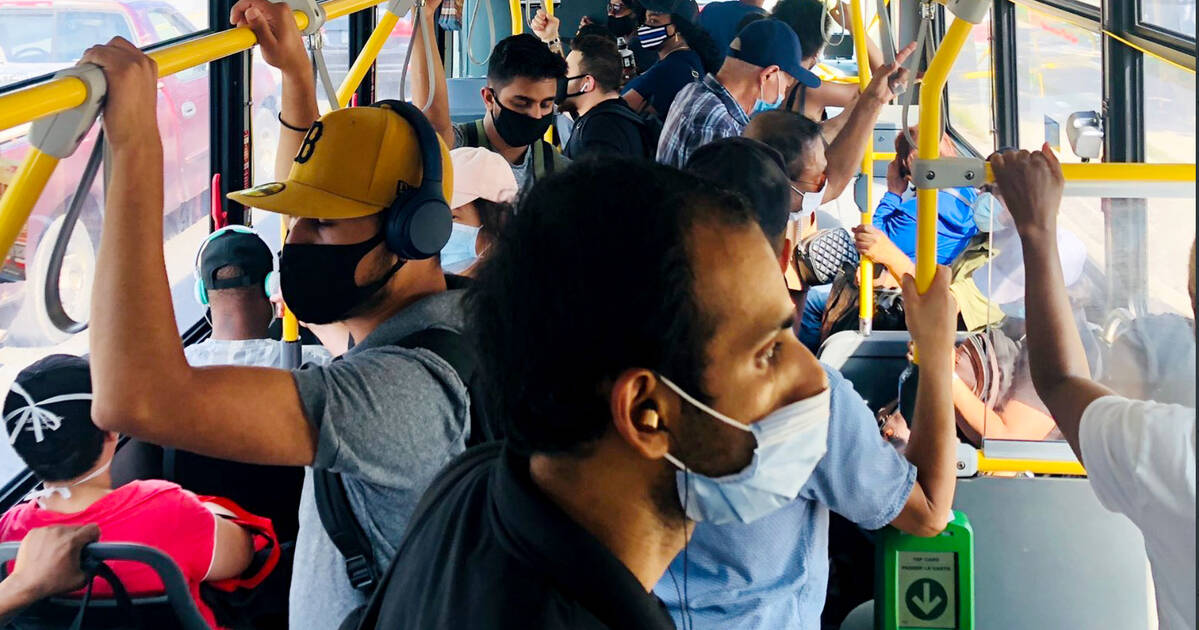 As schools get ready to reopen in September, parents and students are worried about using public transit amidst the pandemic.

Currently, there have been no reports of any outbreaks linked to public transit. However, since it's still unclear if that's due to lack of contact tracing or because the virus isn't spreading on public transit, the anxiety around student transportation during the pandemic is growing.

Is there any kind of plan in place to increase service (lolllllllll) to actually allow for social distancing on the TTC once schools reopen and more offices open? Or is the plan just for Doug to hit the roof when everyone tweets pictures of overcrowded buses

Other local social media users tweeted similar concerns: "I've looked online but seen nothing regarding TTC service and that many students (and school staff!) will be using public transit, which will likely not allow for social distancing given ridership unless service is increased."

"Some if not most of students will go to school via ttc (public) transit. Everyday I can see crowded bus with some passenger without mask and totally no physical distancing especially during rush hour," commented another user on a post from the Toronto District School Board.

As we continue to do everything we can to plan for a safe return to school, we are focussed on keeping staff, students and families safe and healthy. We appreciate your understanding as we move forward.

And we've already been seeing an increase in riders in the last few weeks.

Ridership on bus lines is now at about 45 per cent of pre-crisis levels, while the streetcar network is at about 35 per cent, and subways at about 30 per cent.

But since the TTC is currently operating at reduced service levels to reflect the lower ridership crowding is becoming more common and it's prompting a new wave of panic for the month ahead.

"When school starts, it’s going to be chaos," tweeted Lilian Garcia, in response to Metro Morning story on the TTC.

Currently, the TTC plans to adopt a "demand responsive" approach that will allow it to be "as nimble as possible on routes with traditionally high student use."

But as TTC spokesperson Stuart Green pointed out in an interview with the Toronto Star "no one really knows what back to school will look like in 2020."

According to Green, about eight to nine per cent of TTC riders are elementary and high school students. In the past that has worked out to around 140,000 to 160,000 trips daily.

The TTC is consulting with school boards and post-secondary institutions about what times of day they expect students will be travelling, and the agency is preparing to add buses and streetcars to meet those patterns.

“We have made sure that we will have buses and streetcars available this fall to operate any necessary additional trips,” Green said.

However, even with added service, students won’t always be able to stay the recommended two metres away from other riders.

But students are trying to be proactive in the matter so that they can stay safe.

For example, a group of high school and middle school students wrote a letter to the city's executive committee pleading for bus-only lanes to help.

"Increased bus service is required if we want to resume normal operataions while adhering to physical distancing measures," they wrote.

A group of high school & middle school students has written a letter to the Executive Committee, which meets this morning at 9:30 about implementing #TTC bus-only lanes. (The letter wasn't posted as a PDF in the meeting agenda, but you can read it below.) https://t.co/oMpb30nwVm pic.twitter.com/3qqZYWxINb

"We applaud the implementation of bus lanes along Eglinton Avenue East, but it is imperative implement all six priority corridors as quickly as possible to ensure safe commutes for students."

In July, the committee approved fast-tracking the priority bus lane installation and other service-enhancing measures on five of its busiest corridors. But according to the report, only one will be implemented in 2020.

"Thousands of students will be stuck in crowded buses, creating ground zero for a public health disaster ... How can we feel safe if we risk spreading COVID-19 to our loved ones?" the students continued in their letter. "We need those bus lanes now, not next century."

In the meantime, students and parents are looking to walking or cycling to school as a way to avoid public transit. However, community members are calling for enhanced safety.

listening to @metromorning I realized how many parents won't want their kids taking the bus due to Covid-19, not all kids can arrive by car, we're going to make it safer for kids to walk and @biketoschoolTO https://t.co/b6EVhOlBQC

The Toronto Catholic School Board and the Ontario Active School Travel Council have also called for more bike lanes and enhanced traffic supervision so students can walk and wheel to school safely.

And thankfully the city is already seeing more bike lanes installed this summer.

But for those who cannot rely on walking or cycling as a viable option, Toronto Public Health advises students take the same precautions as other public transit users: wear a mask, wash your hands and load your Presto card online so you don't have to touch the machines.

by Misha Gajewski via blogTO
Posted by Arun Augustin at 6:48 PM