Chaos reigns as TTC shuts down part of Bloor Line 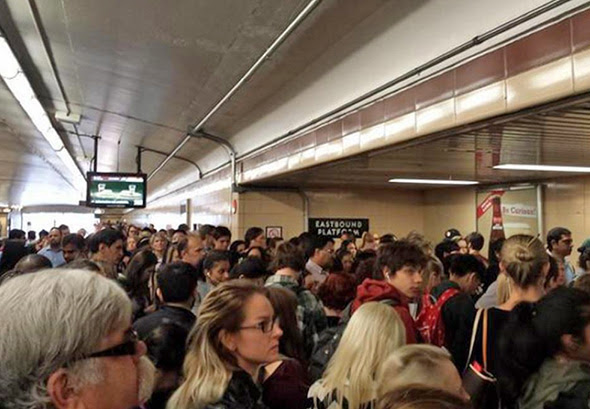 The TTC was forced to shut down a large portion of the Bloor-Danforth line at the height of this morning's rush hour after debris was found on the tracks near Dundas West station.

The closure forced packed trains to empty at Keele and St. George, leaving hundreds of people to crowd into station corridors and stairways. There were reports on Twitter of people fainting amid the crush.

A small portion of the line beyond St. George re-opened in an effort to reduce crowding. Right now, the subway is out between Keele and Ossington.

At a press conference this afternoon, TTC Deputy Chief Operating Officer Mike Palmer said a Metrolinx contractor punctured the concrete roof of the tunnel with a metal I-beam earlier in the week, but a subsequent inspection determined the structure was safe.

Palmer said changing ground water conditions allowed sand and silt to come through the roof. Repair crews are patching the leak in anticipation of removing the beam, which is protruding about three inches into the tunnel, at a later date.

"I have about a hundred men and women working down there at the moment, two work cars are down there. They're doing a very good temporary fix and we're very confident we'll be up and running this afternoon," he said.

Shuttle buses are operating in the meantime.

The TTC says the line could re-open around 3 p.m.

by Chris Bateman via blogTO
Posted by Arun Augustin at 9:35 AM