10 lost Toronto buildings we wish we could bring back 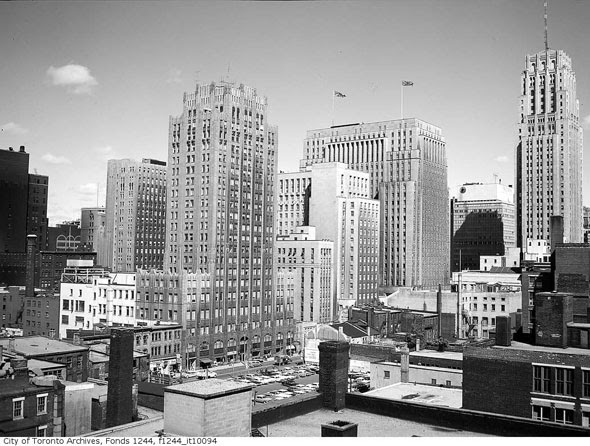 For every preserved historic building in Toronto there have been many more lost to short-sighted planning or indifference. The mindset has changed in recent years--high-profile architects like Frank Gehry must bend their designs to incorporate protected structures and beloved neighbourhood edifices (sometimes) get gentrified--but there are still egregious losses and cases of unfortunate neglect (see Walnut Hall, George St. in general).

It's not practical to expect every pretty building erected in the City of Toronto to remain in perpetuity. This city is in a persistent state of flux, constantly making itself over, old giving way to new. In order to build many of the buildings mourned by this list, other, equally valuable landmarks had to make way. There would be no TD Centre, First Canadian Place, or City Hall in an alternate version of Toronto where these properties had survived.

Here are 10 buildings I would include in an impossible fantasy version of Toronto.

The Toronto Star never looked as much like the Daily Planet as it did during its time on King St. W. Superman co-creator Joe Shuster, a former Star paperboy, likely based Clark Kent's employer on the paper, and the company's imposing, high-tech office tower no doubt played a role. Ink was distributed around the building in pipes, fire poles allowed reporters to quickly change floors, and a system of pneumatic tubes linked the various offices. It even had its own coal-fired power station. The building was knocked down in 1972 to make way for First Canadian Place.

At one time the largest armoury in Canada and the home of the Toronto Regiments of the Canadian Army, the University Armouries was a common place of enrolment during the Boer War, the first and second world wars, and the Korean War. The massive interior housed firing ranges, drill halls, even a bowling alley and was often rented out for events like trade shows. It was razed in 1963. 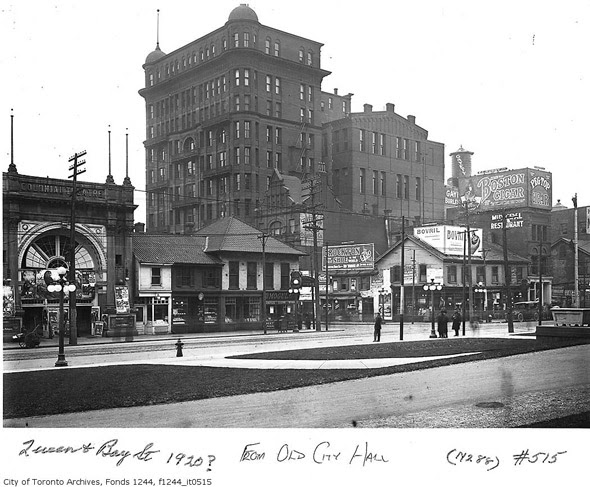 If the Temple Building at Bay and Richmond could have survived the office tower boom of the 1970s, it would probably still be standing today. Built for the Independent Order of Foresters, a fraternal organization and financial institution now operating as Foresters, the ornate 12 storey office building was the tallest in Toronto for about ten years. The building was the brainchild of Oronhyatekha, the IOF Supreme Chief Ranger and a prominent early First Nations entrepreneur. It was demolished in 1970 to make way for the Queen-Bay Centre. 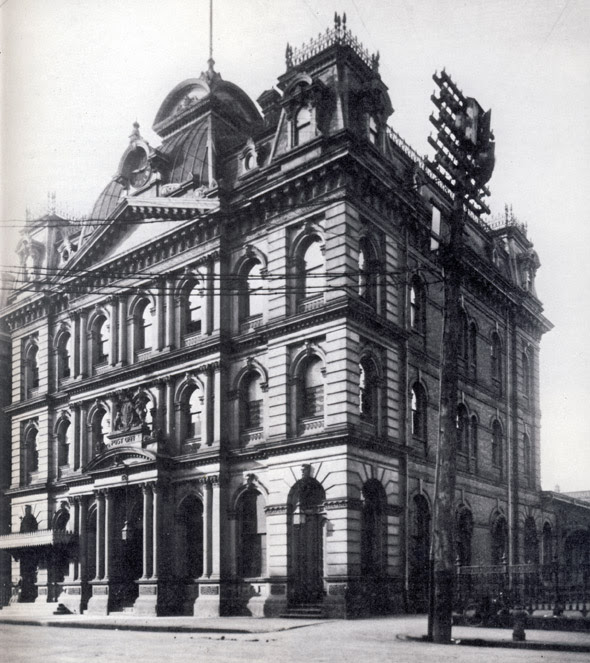 It's easy to miss on the King streetcar, but Toronto Street used to be one of the most impressive thoroughfares in the city. The General Post Office on Adelaide St. was its crowning monument. Heritage Toronto notes that the structure, completed in 1873, was the once federal government's most expensive post-confederation project. Though superseded in importance by later postal buildings, the GPO survived until 1958. An office complex currently stands on the site. 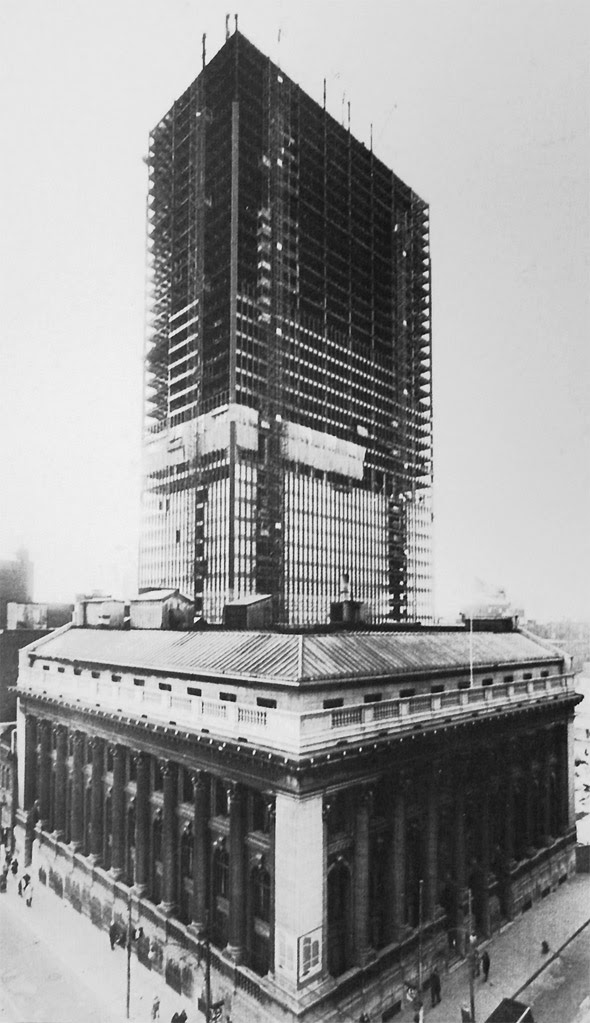 Bank of Toronto (King and Bay)

I'm a big fan of TD Centre, the crisp, modern office towers at King and Bay, but it arrived at a price. The original bank building, built for the Bank of Toronto, one of the financial institutions that merged to create TD, was operated out of a grand columned building at the southwest corner of King and Bay. At its heart, a grand banking hall with massive bronze, marble, and glass skylight was bathed in natural light. Several of the building's decorative details were saved and are now on display at the Guild Inn in Scarborough. 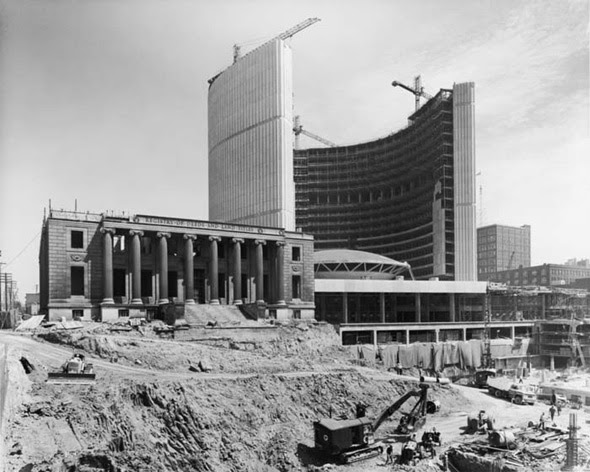 Registry of Deeds and Land Titles

Another grand building surrounded by columns that was replaced by a beloved modernist structure, the neo-classical Registry of Deeds and Land Titles was built at a time when the City of Toronto had the money to spend on grand monuments to itself. The loss of the building is particularly hard to swallow because, judging from photos of construction of City Hall, it didn't need to be razed at all (at least one rejected City Hall design incorporated the structure.) Had it survived, the building would be located in place of the Superior Court of Justice. 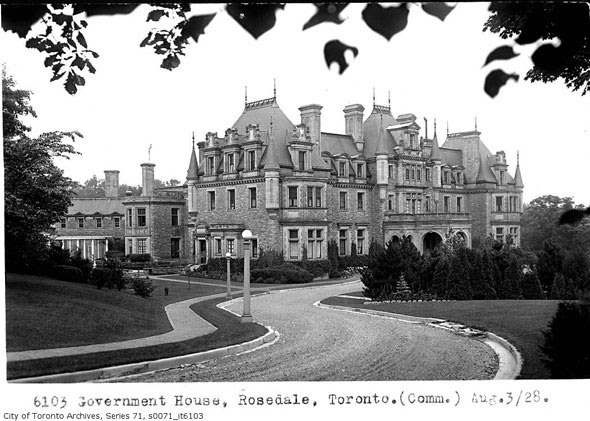 The death of Chorley Park, Ontario's first purpose-built government house, came amid cost cutting in the wake of the Depression. The province built the chateaux-style Rosedale mansion in 1916 to house the current and future lieutenant governors, but costs began to spiral out of control almost immediately. The final bill, $1 million, was almost four times the budget and the cost of maintaining the opulent palace was even higher. It was abandoned and stripped of its contents in 1937 and finally knocked down 1959. The building's concrete entrance arch and part of its podium are all that remain. 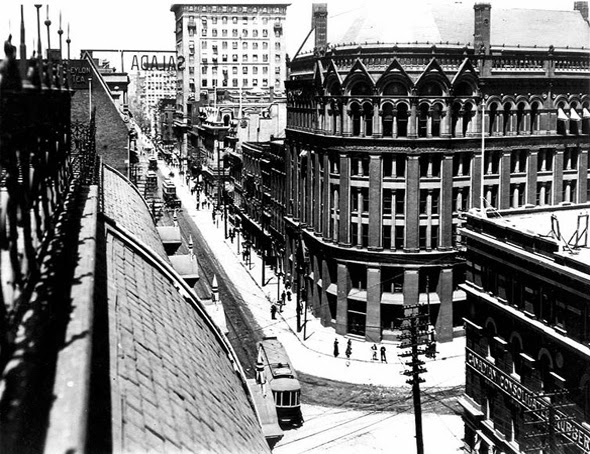 Board of Trade Building

The Board of Trade Building with its distinctive curved front and decorative rooftop tower almost didn't get off the ground. The unfinished structure collapsed during construction, resulting in the dismissal of the New York-based architectural firm responsible for the original design. When it was completed, like the Temple building, it was briefly the tallest in the city. The TTC would called the Yonge and Front building home from 1921 until 1958. 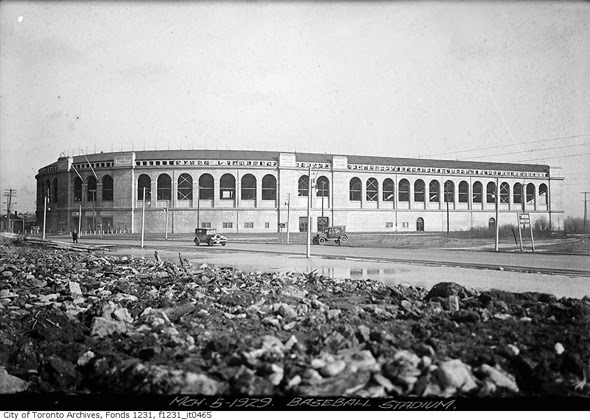 The original Toronto Maple Leafs had bats and gloves, not sticks and pucks, and their second stadium at the foot of Bathurst St., south of Lake Shore Blvd. was a classic ball park. A horseshoe-shaped stand with views of the field and the lake featured giant stone arches that, as James Marsh notes at Toronto in Time, have recently been mirrored in the designs of Camden Yards and New Yankee Stadium. Toronto would be without a downtown ball park for ten years after the Maple Leafs moved to Louisville in 1967 and the stadium was demolished in 1968. 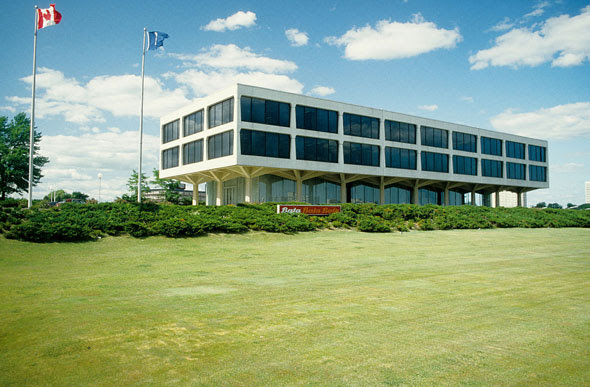 Canadian architect John B. Parkin's work is all over Toronto. He contributed to the design of Rosedale subway station, Yorkdale mall, the Sheraton Centre, TD Centre, and City Hall, but one of his earliest (and arguably best) buildings is sadly lost. The "simple and seemingly weightless" Bata Shoes office, in the words of architecture critic Christopher Hume, was demolished in 2010 to make way for a Ismaili museum and cultural centre. Hume called the classic modernist building on Wynford Drive "unadorned yet poetic." There aren't many like it left in Toronto.

by Chris Bateman via blogTO
Posted by Arun Augustin at 10:43 AM