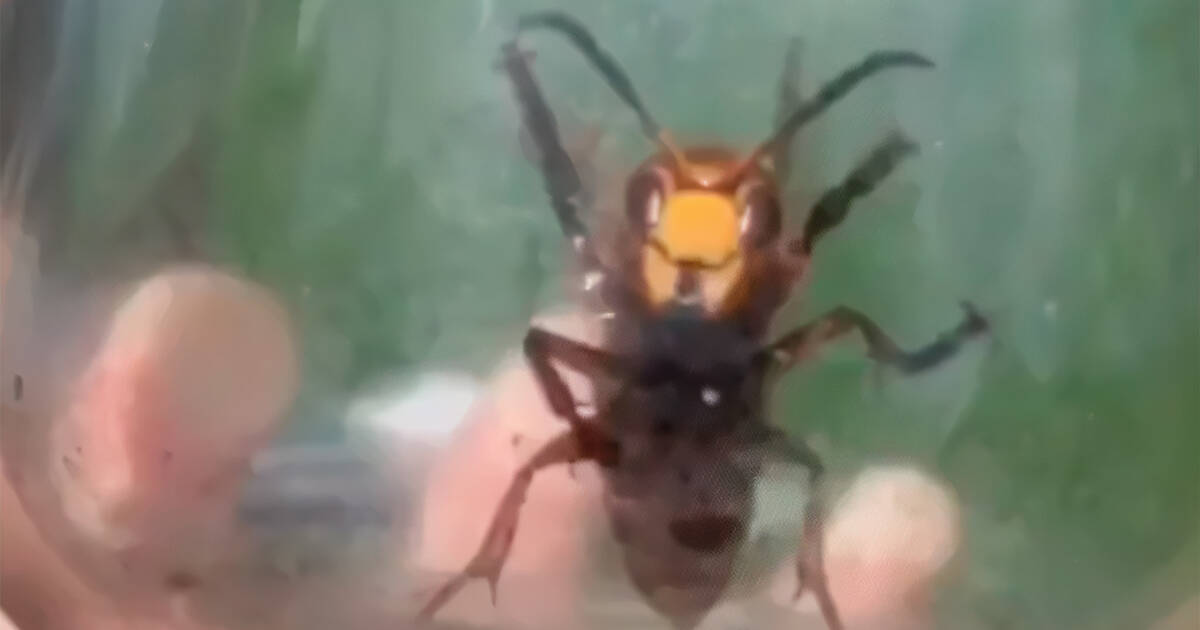 Murder hornet hysteria has finally reached Ontario, marking yet another terrible turn in the nightmare that is 2020.

Fortunately, actual murder hornets have not been confirmed in the province.

Hundreds of thousands of people in places like Niagara Falls and Toronto are currently freaking out over photos and video footage of what uploaders say are Asian giant hornets (a species rudely nicknamed the "murder hornet" due to its deadly venom and penchant for decapitating entire colonies of bees.)

"This is a murder hornet! My mom found it while gardening this morning," reads the text overlay on one widely-shared clip of a large hornet buzzing inside a jar. "

"I live in Niagara Falls and they are here!"

I'm too scared to go outside cause of murder hornets now. They came to Niagara apparently 😭

Two separate experts in the field of Entomology confirmed to blogTO today that insect pictured in that clip is not, in fact, an Asian giant hornet.

Dr. Douglas Currie, curator of entomology at the Royal Ontario Museum, says that the video in question shows a European hornet — a species well-established in North America, and one quite a bit smaller than the at least 5-inch-long Vespa mandarinia (aka Asian giant hornet.)

Currie identified two other insects labelled as "murder hornets"on Instagram and Twitter as a sphecid wasp and another European hornet.

So this is the second murder hornet I've caught in my house, in the last 3 days.
I called the @BPS_News (police) to find out what I'm supposed to do, whether to kill it or not. I was told (without seeing it) that it wasn't a murder hornet.

"Asian giant hornet are known in North America only from a couple of localities in the Pacific Northwest," Currie explained, pointing to a resource with details about how to tell Asian giant hornets, wasps and the common European hornet apart.

"Recent media reports about the arrival of Asian giant hornets in North America have focused on their large size, nasty sting and potential to decimate honey bee colonies," reads the ROM's website.

"While the introduction of alien species is never welcome news, these invaders have been found in just a handful of locations along the southern coast of British Columbia and neighbouring Washington state."

Canadians across the country are claiming to have come in contact with Japanese murder hornets 😱🐝- 📹 gracelaurenn #Canada #MurderHornets #Ontario #Alberta #BritishColumbia #JapaneseMurderHornets pic.twitter.com/c7qFNUeDYn

Honeybee biology expert Gard Otis from the Univerity of Guelph is similarly certain that none of the three videos mentioned above show actual Asian giant hornets.

"I won't say that no Asian hornets have made their way to Ontario, but it is extremely unlikely," he said on Monday. "You are more likely to win the 50 million lottery than to find an Asian hornet in Ontario."

"We (Canadians) have been importing goods from Asia for well over 100 years and only last year (2019) did a few queens make it to British Columbia and nearby Washington State.  There is only evidence of 2 or 3 colonies and one additional overwintered queen that was collected (killed) in that region."

Our Prof. Gard Otis talked to the @weathernetwork about the #AsianGiantHornet.

He reminds us to not overreact "...there have been hundreds of reports [...], not one of which has been an Asian giant hornet. [...], relatively harmless pollinators have been unnecessarily killed." https://t.co/JhbWd3FmNa

Otis says that there haven't even been any sightings of the species in BC or Washington State yet this year (though scary videos of them eating bee heads have been inspiring headlines since early May.)

"There is no evidence yet that giant Asian hornets have become established there, and NONE of them have ever been confirmed in Ontario or anywhere in eastern North America," he told blogTO today.

"The giant Asian hornets are truly large — approximately 5 cm in length.  If shorter than that, they are not likely to be the exotic Asian species."

So chill, dear readers — just because something shows up on 6ixbuzzTV doesn't mean it's true.  Murder hornets aren't out to get humans anywhere, let alone in Ontario,though they could eventually pose a threat to our already-threatened bees.