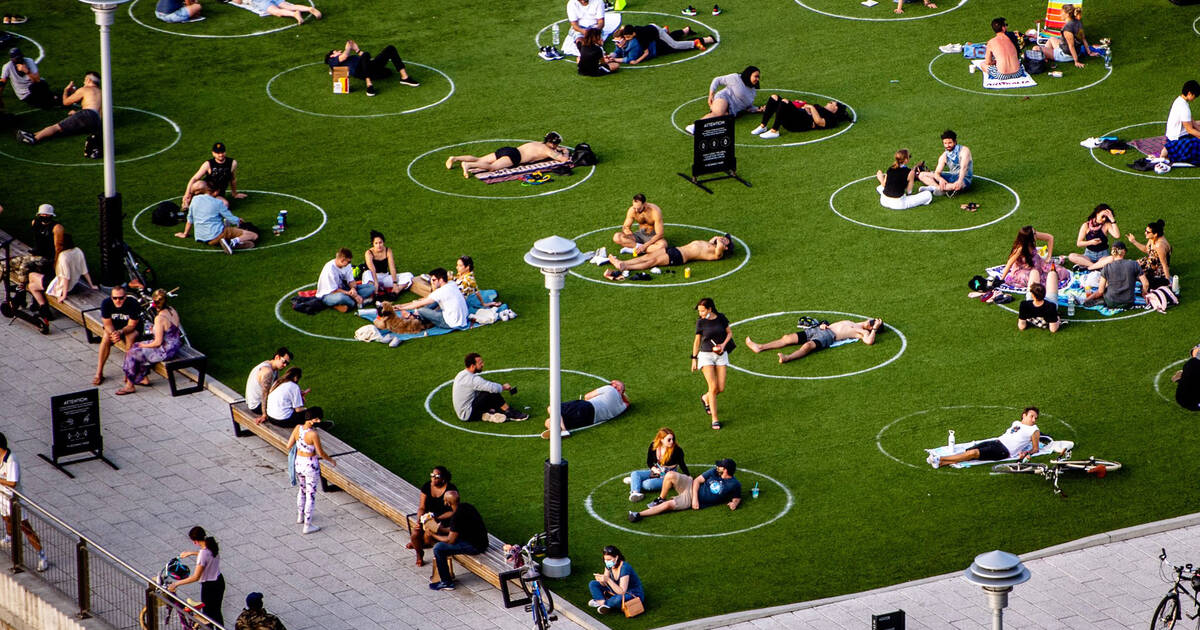 As more and more people head to Toronto parks to enjoy the summer weather, just as many issues surrounding social distancing have come up.

The scene from Trinity Bellwoods Park over the weekend has many suggesting the city put physical distancing circles in parks like those in Brooklyn and San Francisco.

Trinity Bellwoods Park in an area where many people don't have backyards / access to their own green space. No surprise the weekend the city opens its parks, people go. These physically distant circles exist right now in places like San Francisco and New york. Why not Toronto? pic.twitter.com/C3MfbWhDIp

The two American cities installed the lawn patterns recently to allow people their own space that adheres to the physical distancing recommendations set out by health officials.

Dolores Park in San Francisco and Domino Park in Brooklyn each have the large, white "distance circles" that have proved both popular and functional.

Dolores Park in San Francisco over the weekend ... it can be done. pic.twitter.com/BKN7BU4khH

Images of the privately-owned Domino Park in Brooklyn show New Yorkers getting some much needed fresh air while safely adhering to health advisories.

This is Domino Park in Brooklyn, along the East River. Circles were drawn on the astro-turf to keep people at least 6' apart while relaxing in the sun. And it worked! Park goers were very respectful!#SocialDistancing#COVID__19 #deconfinementJour7 #coronavirus #COVID19 pic.twitter.com/kan6X1O2RA

Likewise, photos from Dolores Park show hundreds of people lounging about and enjoying the sunshine while easily maintaining the recommended six feet of space between them.

It's possible to enjoy the weather outdoors and respect each other at the same time. Dolores Park in San Francisco, Memorial Day weekend. pic.twitter.com/MMW7u7Ifo1

Rather than close the park due to overcrowding, San Francisco mayor London Breed opted for the circles after seeing them in Domino Park.

Parks across Toronto and many of their amenities have reopened but officials have stressed that people still need to keep a two-metre distance from each other.

Why not put social distancing circles like San Francisco did for Mission Dolores Park??? pic.twitter.com/LwKywdShRd

Mayor John Tory mentioned them as a potential design option in a press conference on Monday while Councillor Joe Cressy said the city is looking at a number of ways to make physical distancing easier in parks.

by Lisa Power via blogTO
Posted by Arun Augustin at 4:48 PM