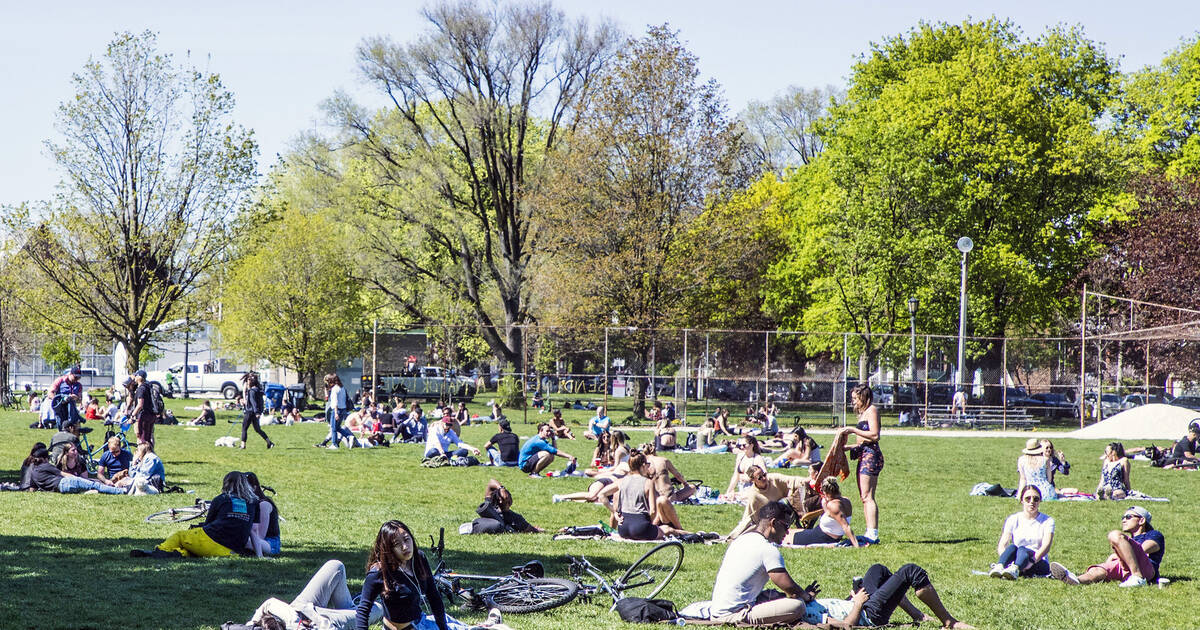 To look at the gleeful, sun-soaked masses gathered in Toronto's Trinity Bellwoods Park on Thursday afternoon, you'd have never guessed the city were in a state of emergency — let alone dealing with the outbreak of a highly-contagious virus that's already killed more than 6,000 people in Canada.

Hell, if you weren't familiar with the area and its inhabitants, you likely wouldn't have even been able to guess that it were a weekday.

We’re in trouble guys. I just walked through Trinity Bellwood’s quickly with a mask on and it’s PACKED. Seeing this everywhere. #secondwave @blogTO pic.twitter.com/aU1djhEoD4

That's Bellwoods, though: A sprawling green paradise for west-end 20 and 30-somethings to escape condo life and hang out with friends on warm, sunny days  — often while drinking tall-cans and wearing as little clothing as possible. Kind of a like a beach, minus all the sand and with a 7/11 located conveniently across the street for mix.

It's a place where free spirits and people who want to look cool to relax, unwind and forget about the hassles of daily urban life — pandemic included, apparently...

Last night in Trinity-Bellwoods Park was like a cocktail party.

Not a care in the world.

Images from the massively-busy park tore through social media platforms yesterday, inspiring a whole bunch of tsk-tsking among the Twitterati.

"Come on, @TOPublicHealth! Apparently no one in their 20s or 30s gets social distancing, because #TrinityBellwoods looks like the same party zone it did last summer," wrote one naysayer, tagging both Toronto Public Health and city councillor Joe Cressy.

Many of said critics were careful to note that they had only passed the park, walked through briefly, or that they were wearing a mask the entire time.

"Had the take the dog to the vet today near Trinity Bellwoods park in Toronto and bottom line we're all gonna die," wrote one.

The scene in Trinity Bellwoods just now. @joe_cressy @JohnTory @fordnation My kids can’t go to school or camps but this is ok? Please clarify pic.twitter.com/seUHa9N3ju

Some who don't yet seem to understand that it is legal to hang out in Toronto parks (under strict conditions) are calling upon the city to go in and arrest everyone — or worse, drop some napalm.

"Trinity Bellwoods yesterday was a disaster... We're already going backwards thanks to #COVIDIDIOTS that just won't abide by rules."

This early evening’s walk at the park. Barely into phase 1 of the re-opening, the park was filled with people #COVID19Ontario #Toronto pic.twitter.com/ToudPbY6dy

Critics of the behaviour seem particularly concerned about the lack of social distancing and mask-wearing in the park, especially given that we only just entered Stage 1 of Ontario's economic reopening plan on Tuesday.

Those blaming the province for reopening too quickly, however, should note that Bellwoods has been filling up on warm days for weeks now.

Yesterday's boom likely had more to do with gorgeous weather than anything else — though there is a growing amount of evidence online to suggest that people are growing weary and increasingly defiant of lockdown orders.

Omg noBoDy in TrInITy BeLLwoODzz is physical Distancing.... Oy we live in Toronto. 3Million people. People are gonna want to go get some vitamin D. How many cases in Toronto that are not in LTC facilities? #toronto #trinitybellwoods #FridayThoughts

For the record, it's not against the rules to be in Trinity Bellwoods right now — though the park has proven to be among the most problematic in terms of social distancing violations since the pandemic first hit.

The City of Toronto's physical distancing by-law states that visitors must still maintain a distance of two metres between themselves and people they don't live with, while gatherings of more than five people are still prohibited per an order issued under Ontario's Emergency Management and Civil Protection Act.