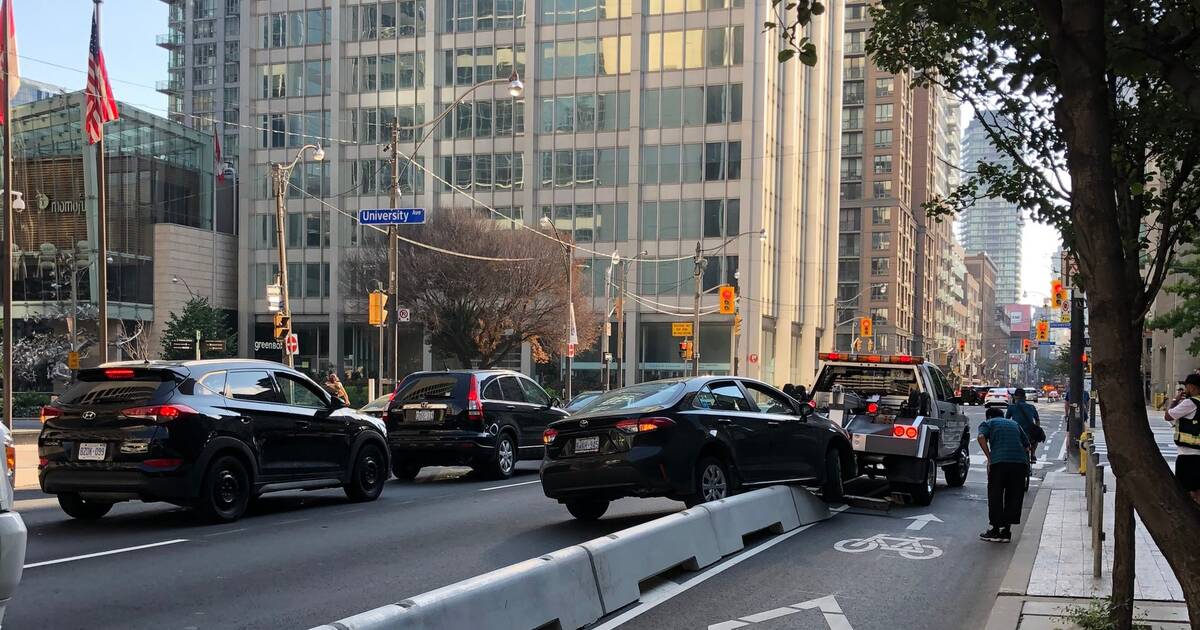 Photos of a car colliding with a concrete barrier along a Toronto bike lane are circulating widely on social media this week, giving cycling advocates all the more reason to continue pushing for safe, separated infrastructure throughout the city.

On Saturday evening, a Toronto resident posted several photos of a car that appeared to have rammed into and partially hopped over the concrete barrier separating the road and bike lane at University and Richmond.

"Imagine tiny little bollards there - or nothing at all. What happens to the cyclists and pedestrians then?" wrote the Torontonian who posted the photos. "Ask yourself how fast this driver was going to accomplish this - and ask yourself where they thought they were going."

The photos are a stark reminder of what could have happened to cyclists in the lane had those barriers not been in place, or if the separators had been flimsy and temporary.

"New infrastructure doing its job," wrote Cycle Toronto of the photos on Twitter. "Low concrete walls on Richmond prevent car from being driven into people on bikes or the sidewalk."

Thank god there is actual protection here (Rich & Uni), but why doesn’t it extend to the intersection? Clearly cars are trying their best to roll over the #biketo lane. pic.twitter.com/qoueth0XPM

Cycling advocates have long advocated for bike lanes with sturdy, concrete barriers in Toronto, arguing that they're the only type of infrastructure that's guaranteed to protect bikers from aggressive motorists — of which there are plenty.

The city has stepped up its game when it comes to installing new cycling infrastructure this summer thanks to the pandemic, but some of the separators installed along temporary lanes have been so flimsy that they were actually destroyed by cars just days after being completed.

Exhibit A: the ocean wave-shaped separators along Bloor Street that were flattened by cars exactly two weeks after being installed.

As a result, a number of cyclists and advocate groups are using these photos to continue fighting for safe, sturdy and separated bike lanes, including Docs4SafeCycling — a group of doctors pushing for better cycling infrastructure in Toronto in an attempt to encourage more people to adopt the healthy habit.

"The reason we keep pushing for physically seperated [sic] bike lanes," the group wrote of the photos.

Goes to show why we need a lot more concrete separators for all bike lanes in Toronto! #bikeTO @CycleToronto https://t.co/SlTxEXMt65

And pro-cycling locals are also participating in the discussion, with some saying more solid infrastructure is essential in order for them to feel safe biking around this massive, vehicle-dominated city.

"THIS is why timid cyclists like me really need physical barriers to separate cars from cyclists!" wrote one Torontonian.