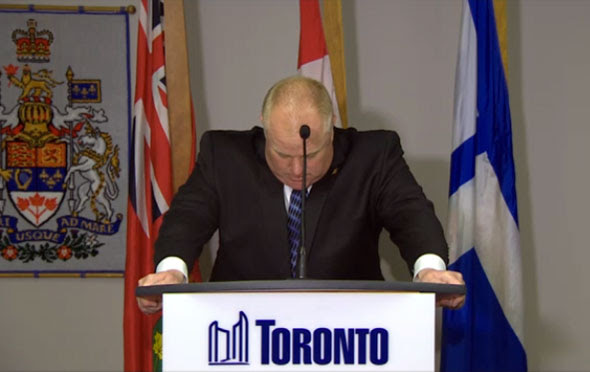 Last night, as the sun set on WorldPride, a beautiful double rainbow arced over the city. It was the crowning moment of a weekend spent celebrating sexual, gender diversity, and the things that unite us all. Today, Rob Ford returned to City Hall.

At a controversial invite-only press conference that excluded NOW magazine, Toronto Community News, and several other members of the city hall press gallery, an emotional Ford read a prepared statement and declined to take questions.

Speaking for a little over 17 minutes, Ford admitted that he has "uncontrollable cravings" for drugs and alcohol and described the events of the last few months as "some of the darkest moments of my life."

Ford also apologized to city council, the media, and Karen Stintz, who he drunkenly said he wanted to "fucking jam" at an Etobicoke bar in May. He said that his addiction is a chronic disease that will require treatment for the rest of his life.

Earlier, City Hall spokesperson Wynna Brown condemned the mayor's decision to hold his press event inside his office, where space is limited. "From a city point of view, this is not reflective of the approach or the collaborative relationships we have and value with members of the media, particularly our colleagues in the city hall press gallery," she told the Star .

David Nickle, President of the Toronto City Hall Press Gallery, also lamented the decision in an open latter to Ford's press secretary. "Choking off access to any one of those outlets or journalists is a disservice to Torontonians, by their duly elected mayor. It thwarts democracy."

by Chris Bateman via blogTO
Posted by Arun Augustin at 2:23 PM