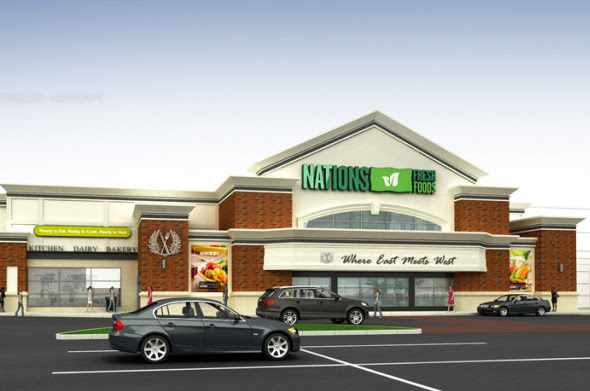 When American retail giant Target closed its 133 Canadian stores, it left five big-box holes in Toronto-area malls and plazas. However, it looks like one will be getting a more permanent makeover as a Nations Fresh Foods supermarket.

As Andrea Williams spotted on Twitter, the Stockyards will soon be home to Toronto's first Nations. The small grocery chain, which lies under the larger Oceans Fresh Food Market banner, already has two locations: one in Vaughan and another in Hamilton.

Nations is touted as more "upscale" than Oceans by the Hamilton Spectator and its other outposts feature a fresh fish counter, a butcher, a bakery, a bubble tea bar, sushi and fresh dim sum.

What do you think of this addition to the Stockyards? Let us know in the comments.

by Amy Grief via blogTO
Posted by Arun Augustin at 2:06 PM