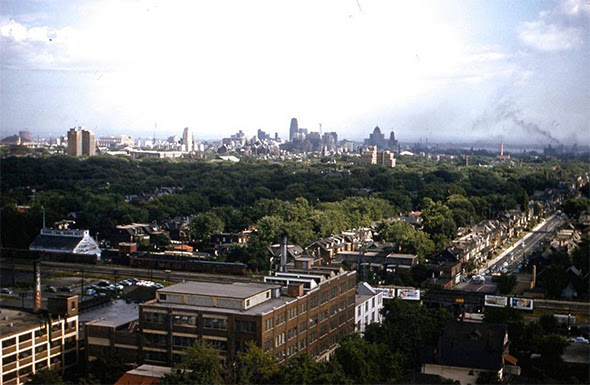 When Casa Loma was completed in 1914, it featured one of the most astounding views of the city, and not just from its upstairs windows, but from the back terrace, which was mostly unencumbered by the trees that now enclose it. It is still a lovely place, but one can't but wonder after the view that the trees block.

When we track the progress of the Toronto skyline, so often this is done from the south looking north. Blessed with the Toronto Islands and a place like Polson Pier, it's the most obvious way to do such a thing, but it's precisely for this reason that an alternate perspective is so interesting.

When I noticed the above photo posted to the Vintage Toronto Facebook group yesterday, I immediately wondered what a before and after comparison might look like. Fortunately, this was easily accomplished thanks to the fact that photographers still regularly visit Casa Loma and shoot southward. 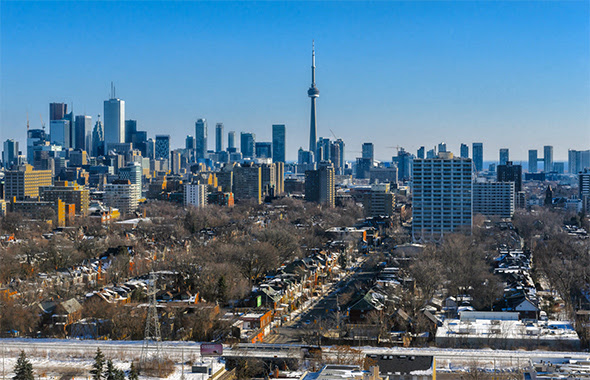 The contemporary view (this actually dates back to March 2015) isn't quite a perfect match, but it's close enough to show a profound amount of change within a similar frame. In fact, the majority of the highlights from the 1954 skyline have been blocked by the present day Financial District (e.g. The Royal York and Commerce Court North).

That's no surprise, but it is fascinating to note, on the other hand, that large scale development has remained concentrated mostly south of Bloor (from this angle, at least), and despite the lack of foliage visible in the second photo, the Annex remains almost as plush at it ever was.

Also interesting is that plume of smoke emanating from the foot of Spadina in the 1954 photo. In case you didn't already know this, Toronto used to be way more dirty than it is today. It wasn't until the 1980s that things started to get cleaned up in a major way when heavy industry and coal sales had dwindled in the city.

In any case, one gets a better sense of the city's transformation over the last half century from atop its old castle than from pretty much anywhere else.

by Derek Flack via blogTO
Posted by Arun Augustin at 9:35 PM