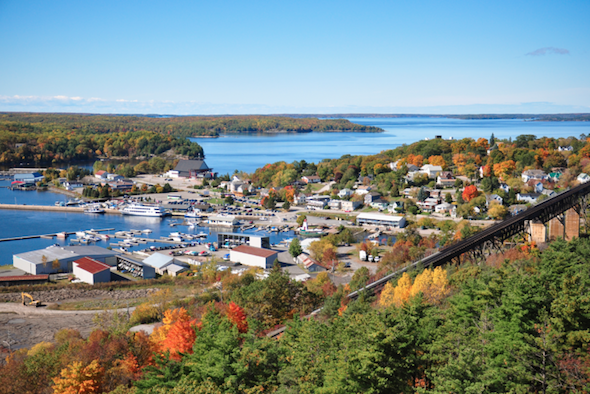 The top weekend getaways from Toronto for those who don't own a car range from urban explorations to wilderness adventures. There's plenty of towns you can get to by bus or train from the city, but the key is ensuring that once you arrive there will be plenty to do. Ottawa and Montreal are obvious destinations, so I've left them off here in favour of other options.

Here are my picks for the top car-free getaways from Toronto.

Explore the true Canadian Wilderness in Algonquin or Kilarney
The Parkbus has plenty of worthy day trips, but the service really comes into its own for weekend getaways. Some of the most popular excursions are to Algonquin Park, Kilarney, and the Bruce Peninsula, but there's even more destinations to choose from depending on what you're looking for. Get picked up in downtown Toronto and a few hours later you'll be sleeping under the stars.

Be a part of Buffalo's comeback story
It'll take you about three hours to get to Buffalo on the Greyhound for less than 50 bucks return. Once there, you can take advantage of Buffalo's new bike share system or ride its streetcar subway to explore a city undergoing a major resurgence. Make sure to check out the Ellicott Street restaurant scene (easy to access without a car), Allentown, and Elmwood Village.

Experience cottage country without a cottage
Parry Sound is a picturesque cottage country town nestled alongside Georgian Bay that's perfect for those who want to get away up north without ever having to rough it. Take the Ontario Northland bus up the 400 and stay at The Bayside Inn right near downtown. You can enjoy the waterfront, boat cruises, and the quaint bars and restaurants the town has to offer.

Soak up the history and beauty of Kingston
Kingston is the perfect size of city to explore in a weekend. You can train or bus to the main depot by the highway and then take a cab downtown, where you'll encounter gorgeous 19th century buildings, charming pubs (hit the Toucan), a lovely waterfront, and numerous bed and breakfasts scattered around downtown.

Get two for the price of one in Kitchener-Waterloo
You can take the GO Bus to Kitchener and Waterloo in about an hour and half. The sister cities swell during annual Oktoberfest celebrations, but there's lots more to do than clown around in lederhosen. From cool spots like the Berlin Bicycle Cafe to the burgeoning craft beer scene, to the scenic Victoria Park, there's plenty to explore over the course of a weekend.

Know of a great car-free getaway from Toronto? Let us know in the comments.

by Derek Flack via blogTO
Posted by Arun Augustin at 6:35 AM