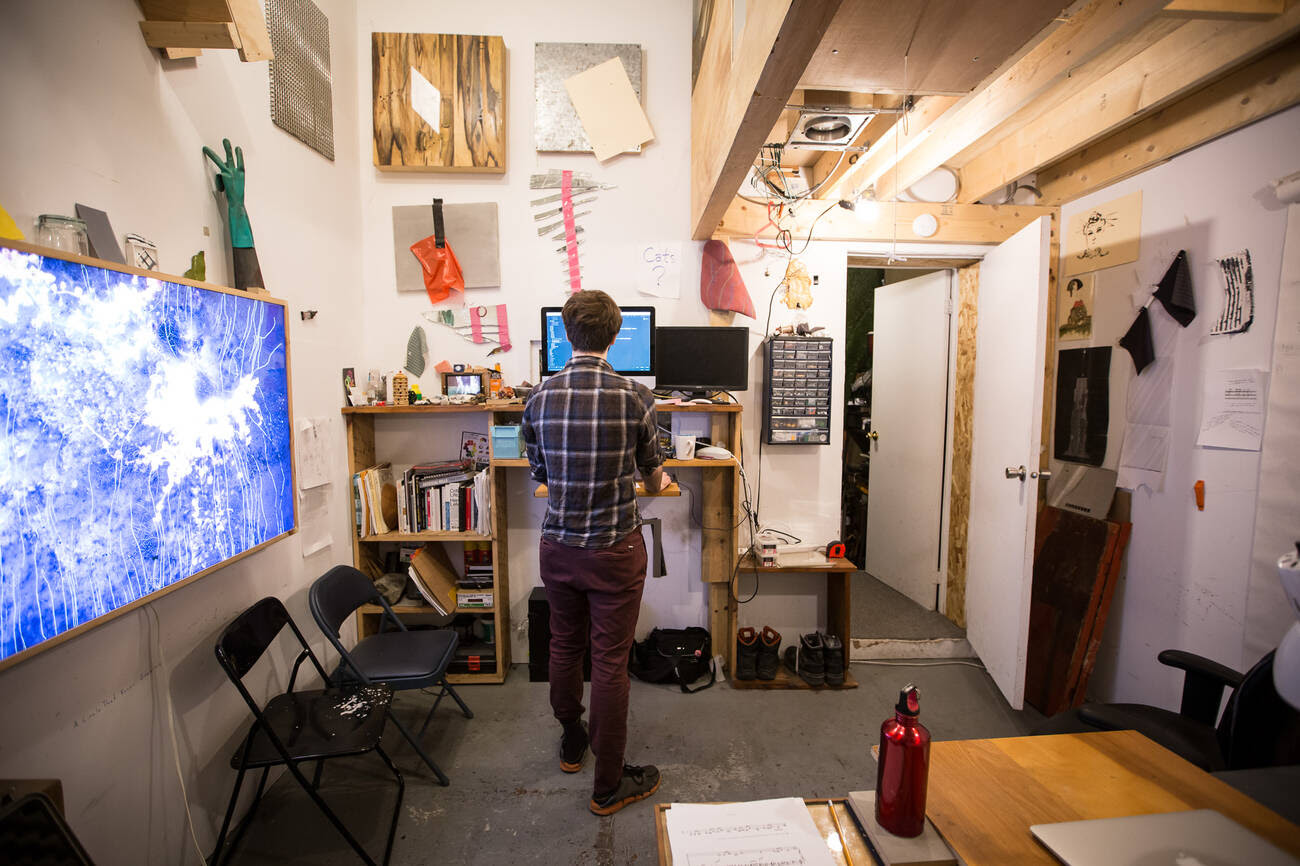 With flooding issues overtaking headlines this spring, it feels like near the water is the last place you’d want to be.

Not so for several artists who have been living and working in the Port Lands for years. To collective VS VS VS and artist Max Dean, the area viewed by some as an industrial wasteland is home. 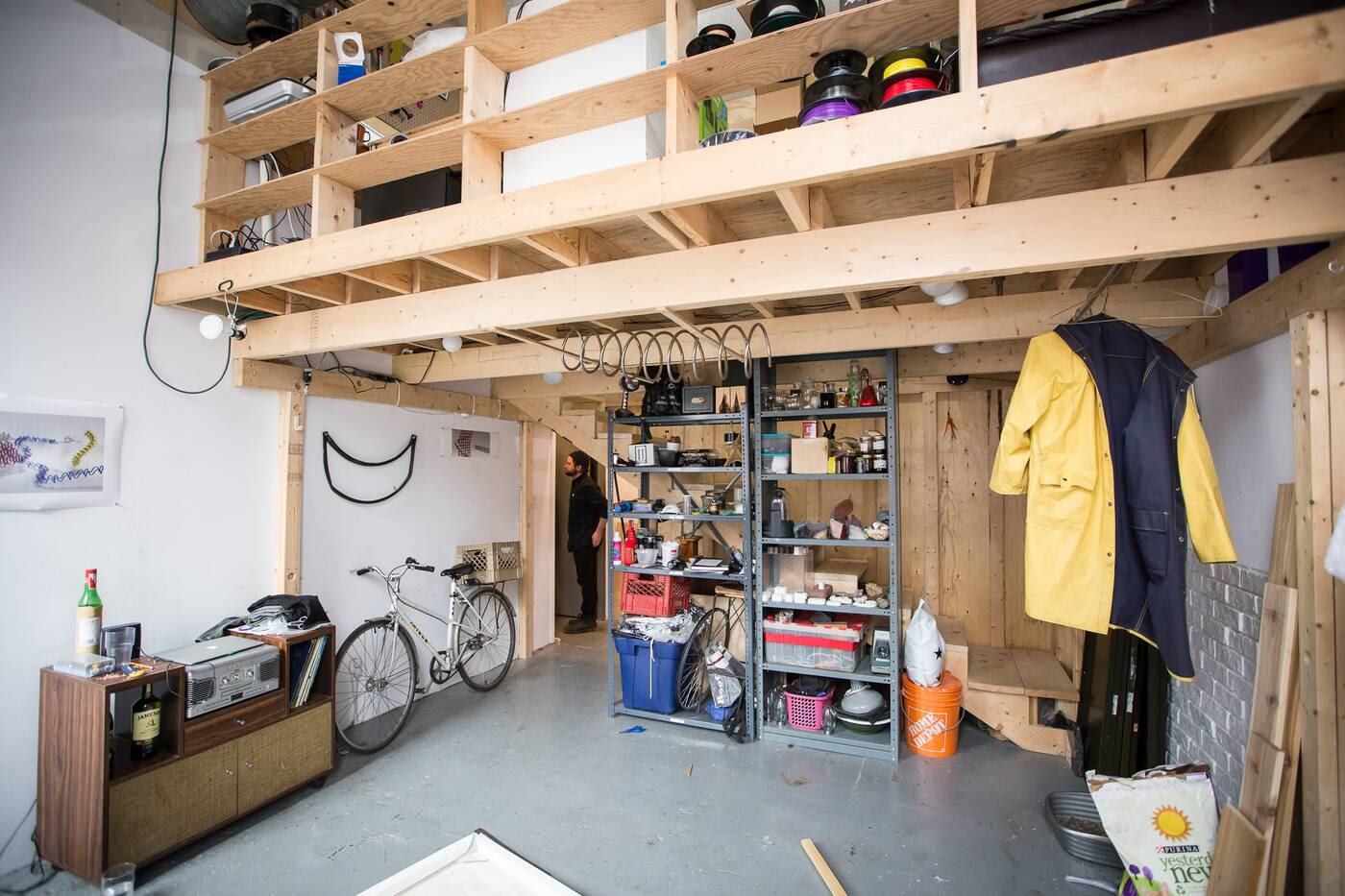 One of the many live-work studios that make up the VS VS VS loft in the Port Lands.

But how did they end up here? For one thing, a lack of noise concerns. The area home to one of Toronto’s biggest and most obnoxious clubs is certainly somewhere the artists don’t expect to get any complaints. 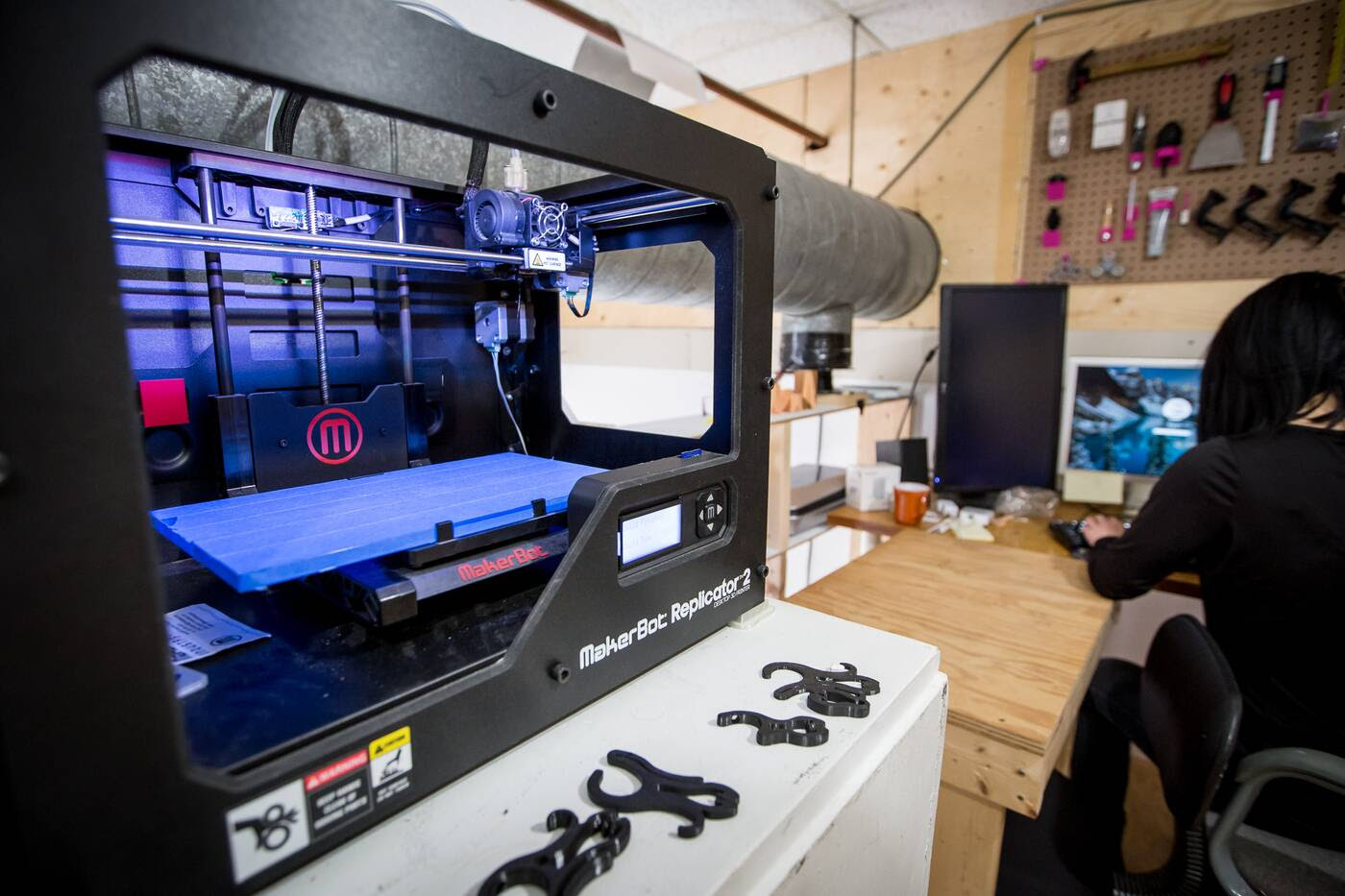 A 3D printer in the office space above in the previous photo artist Ryan Clayton uses to make art objects.

Wallis Cheung, Stephen McLeod and Miles Stemp of VS VS VS tell me about performance festivals they throw that last for two days and two nights, guests drifting in and out of their home, staying the night. They can also run loud equipment like planers any hour of the day without any issues. 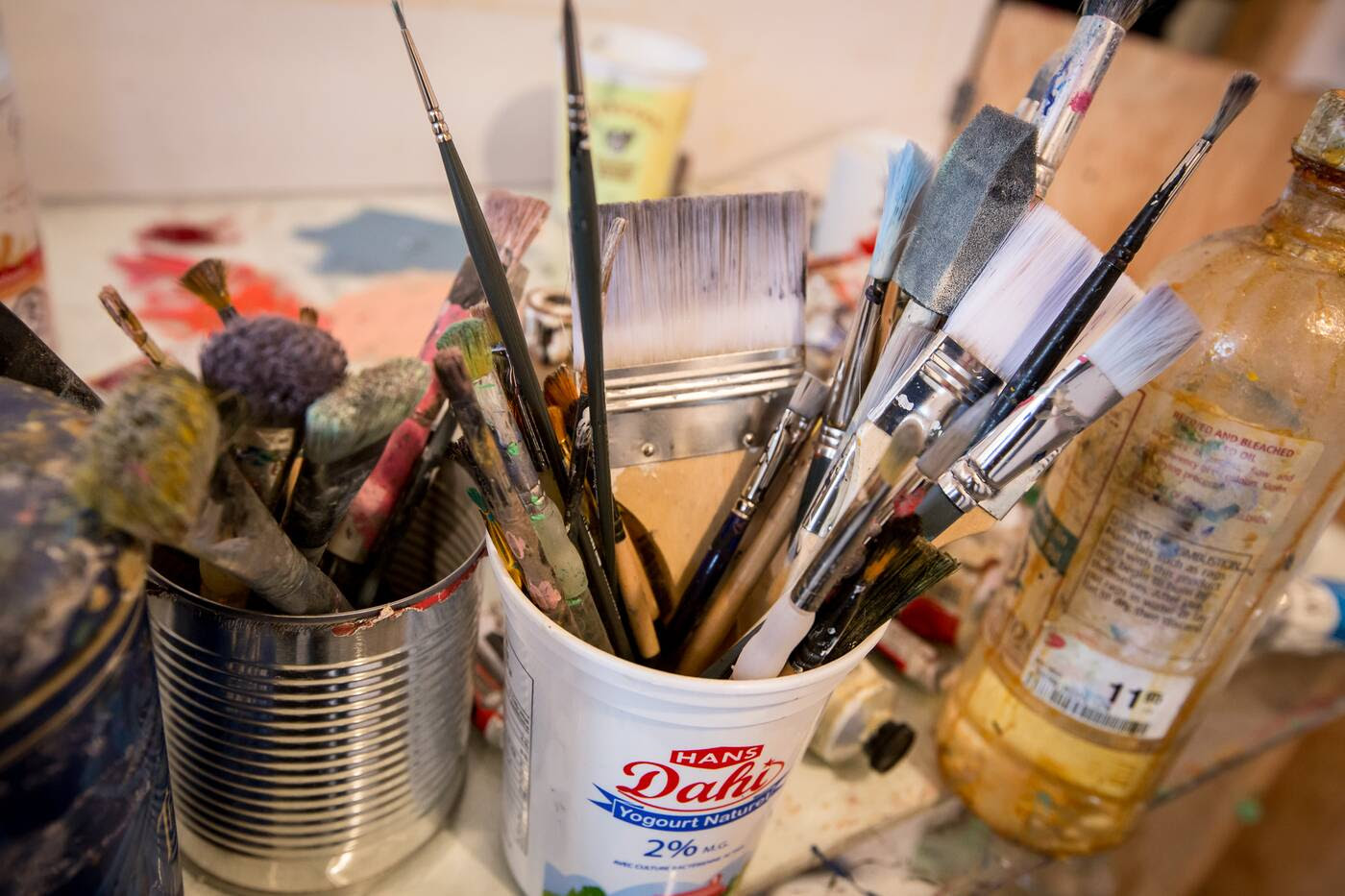 Tools of the trade.

Dean is a recreational rower from Vancouver and loves port cities, so it was his heart that called him to the water first. However, as someone who works on plenty of very large-scale installations, he also simply found larger studios were available here. 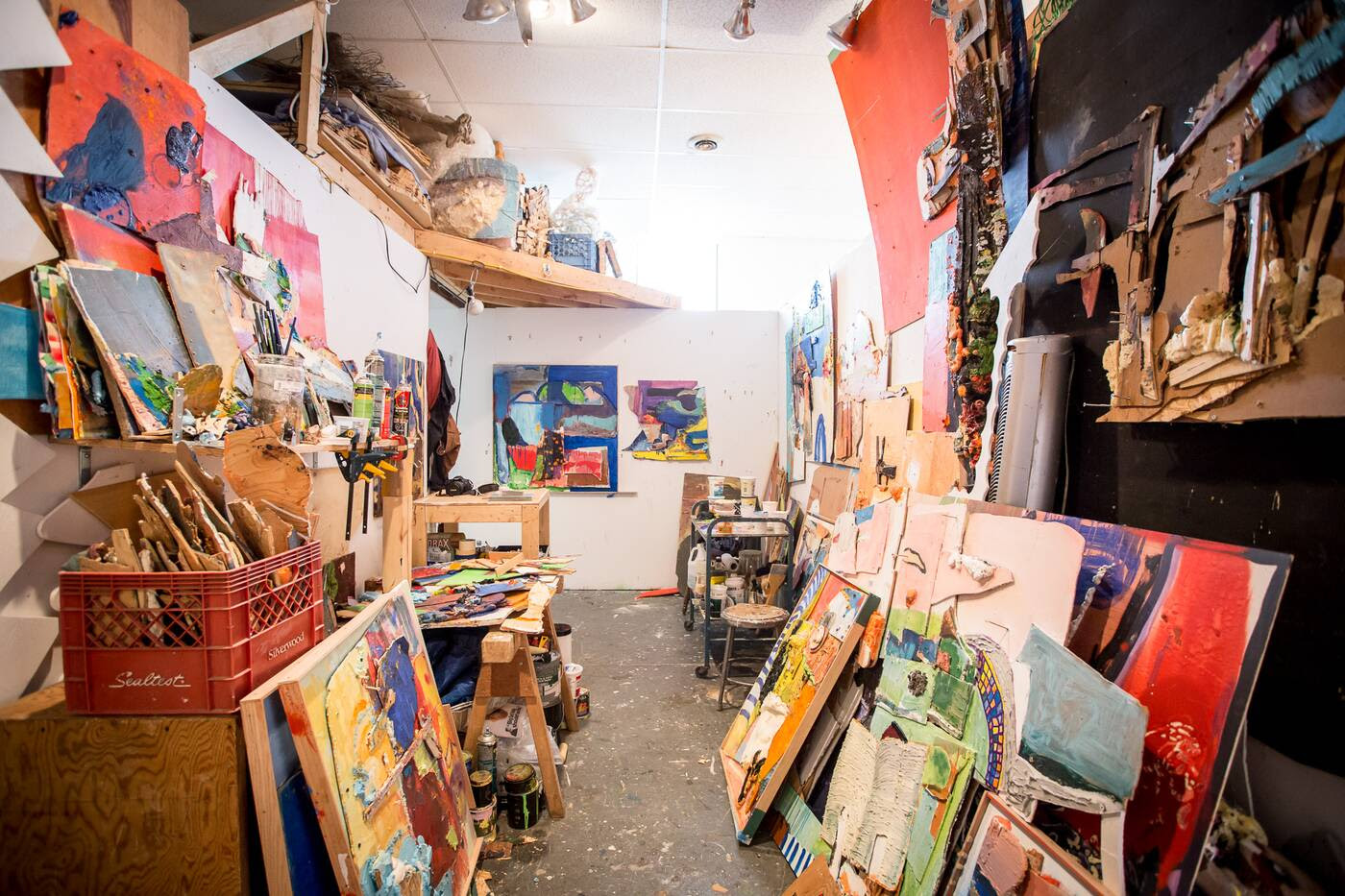 That has to be true of VS VS VS as well: their live/work space is a warehouse chopped up into various studios/rooms, filled with projects like Stemp’s tower of light boxes or Cheung’s “sculptural paintings.” McLeod has a tiny room choc full of guitars and a piano hidden away. 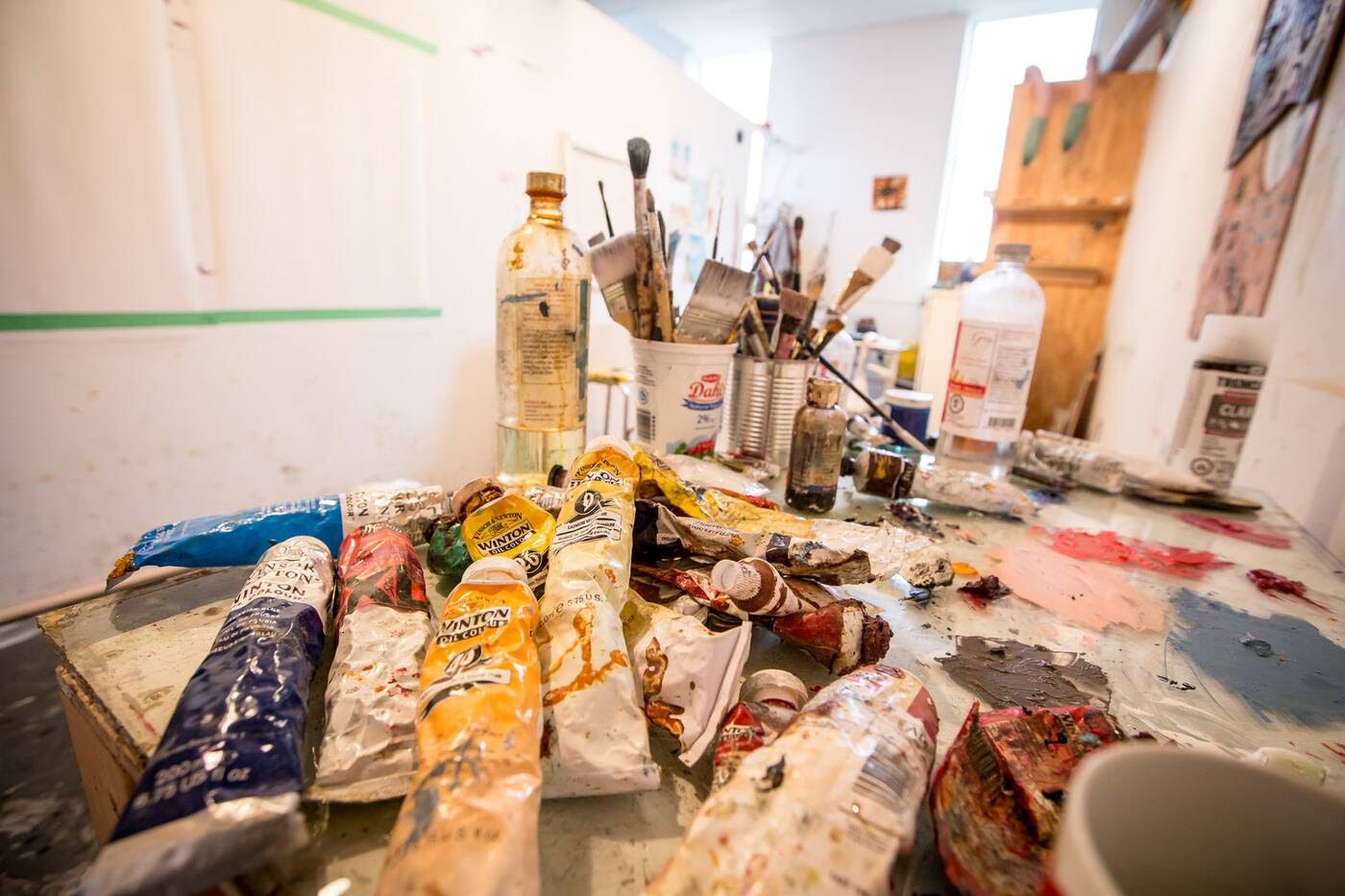 Traditional materials: paint and a palette.

“Working in the Port Lands is like working in any semi-industrial area except we happen to be closer to the water,” says Dean. “I think the Port Lands has great potential. It is an amazing opportunity to develop a large tract of land and shape it with purpose building on its unique character.” 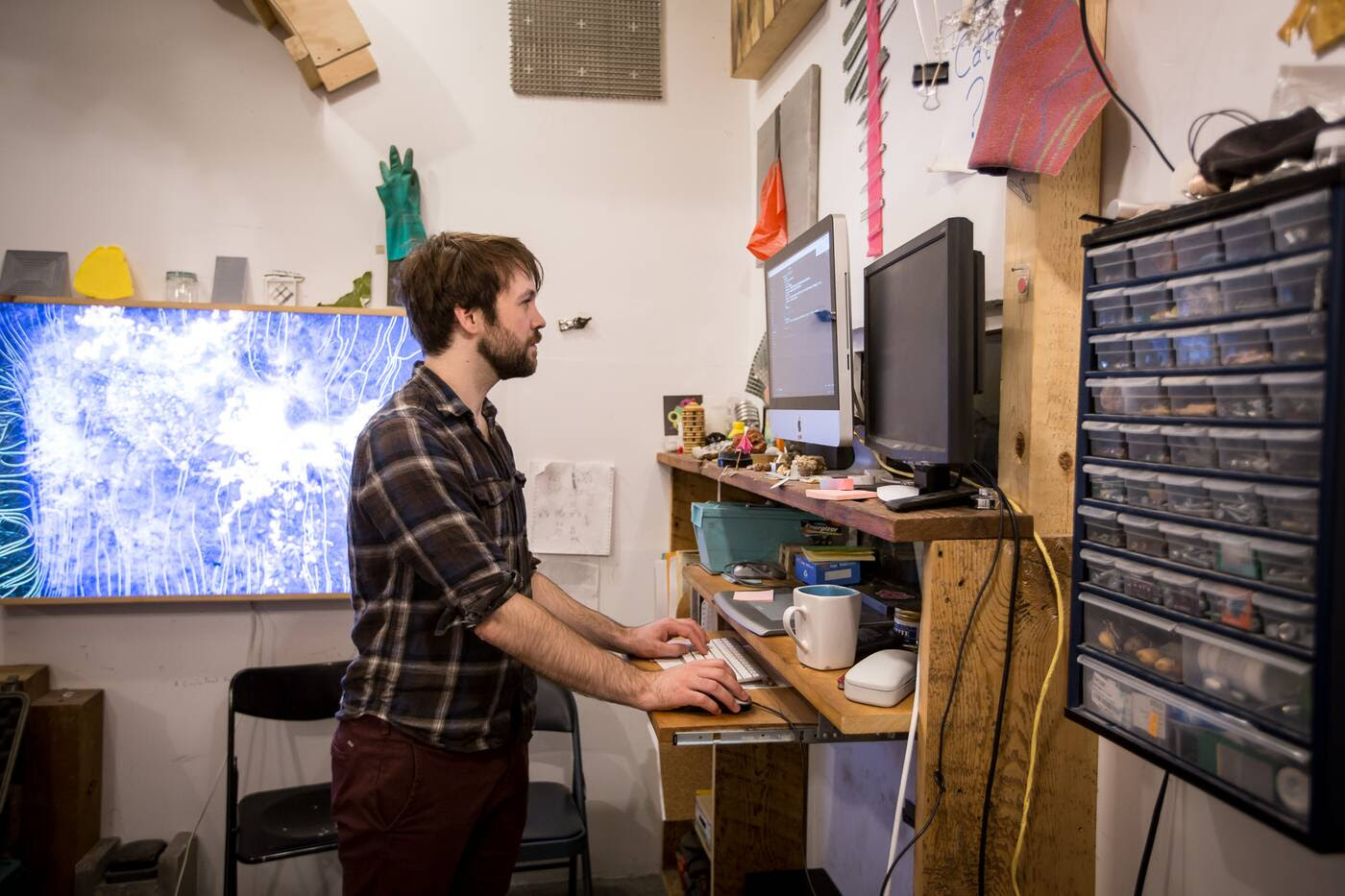 Stephen McLeod working at a stand-up desk station next to a light box he created using old slides.

The VS VS VS collective lets me know as far they’re concerned, decisions are being made at city level. They’ve heard something might be put together like an Artscape, but better.

Stemp says the current state of the Port Lands is “the last chance to get the waterfront right,” and hopes there's some people out there with a little power who recognize that. 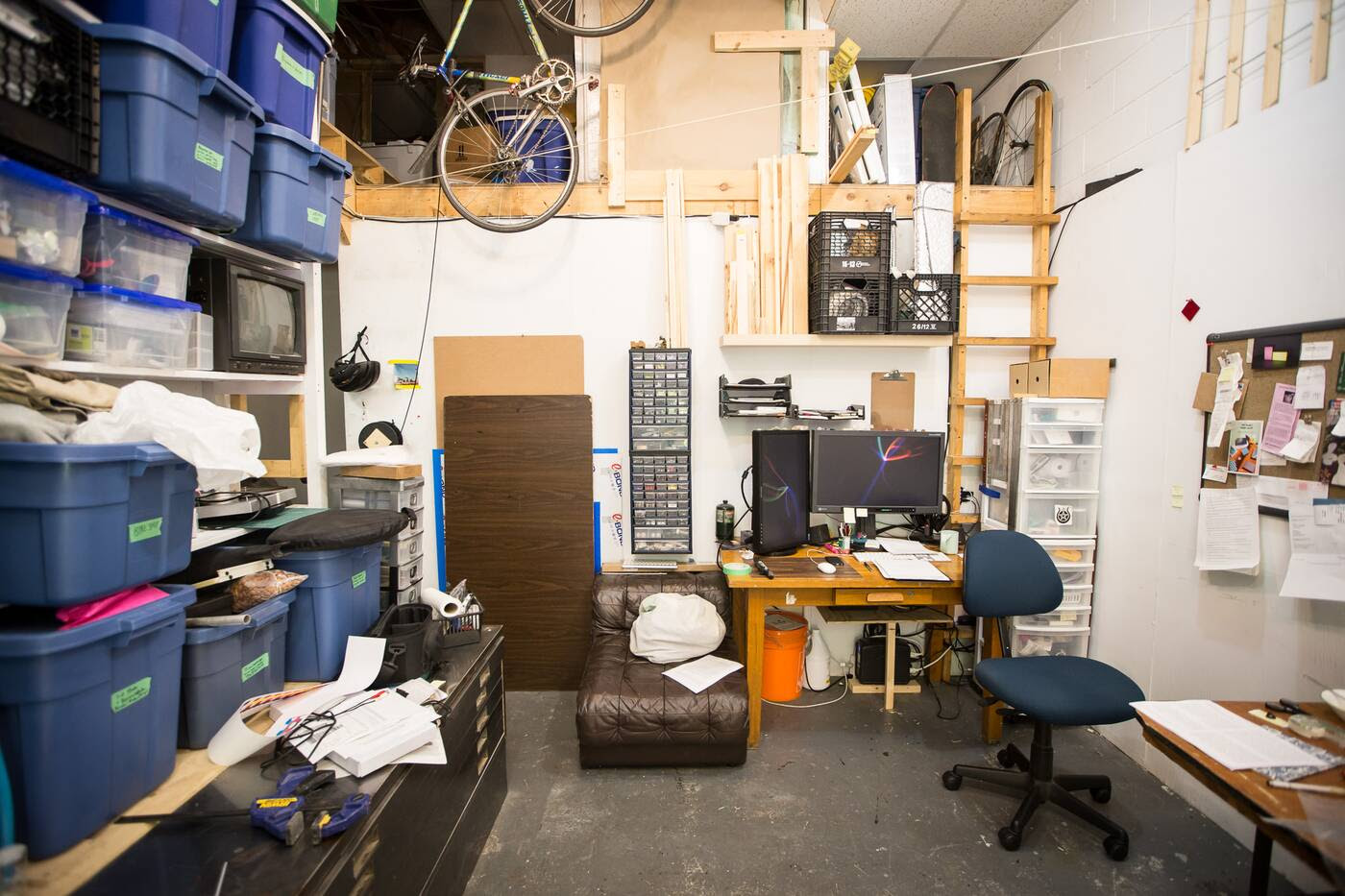 Another work and storage space.

Though Luminato called its festivities in the Hearn last year an unrepeatable “enormous undertaking,” perhaps with more permanent housing what Dean calls “a great opportunity to situate artists and cultural facilities” won’t go to waste. 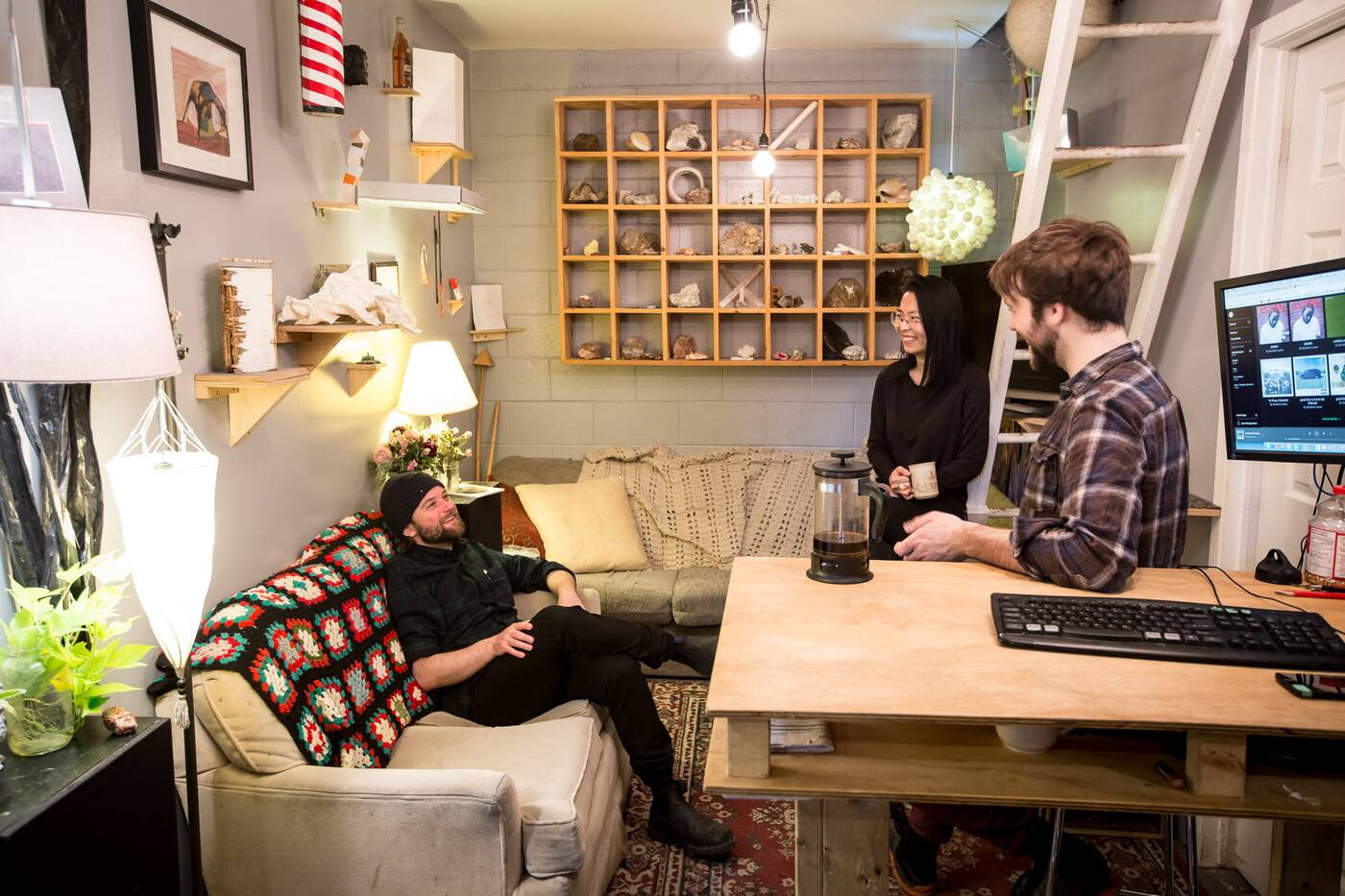 Tea boils and Kendrick Lamar plays in the kitchen, and a collaborative piece decorates the living room wall.

While you may not be able to attend Luminato in the Port Lands this year, you can get your industrial, artsy fix at one of several garage sales VS VS VS will be holding throughout the summer. And in the future? Who knows. Maybe you’ll find yourself living and working there too. 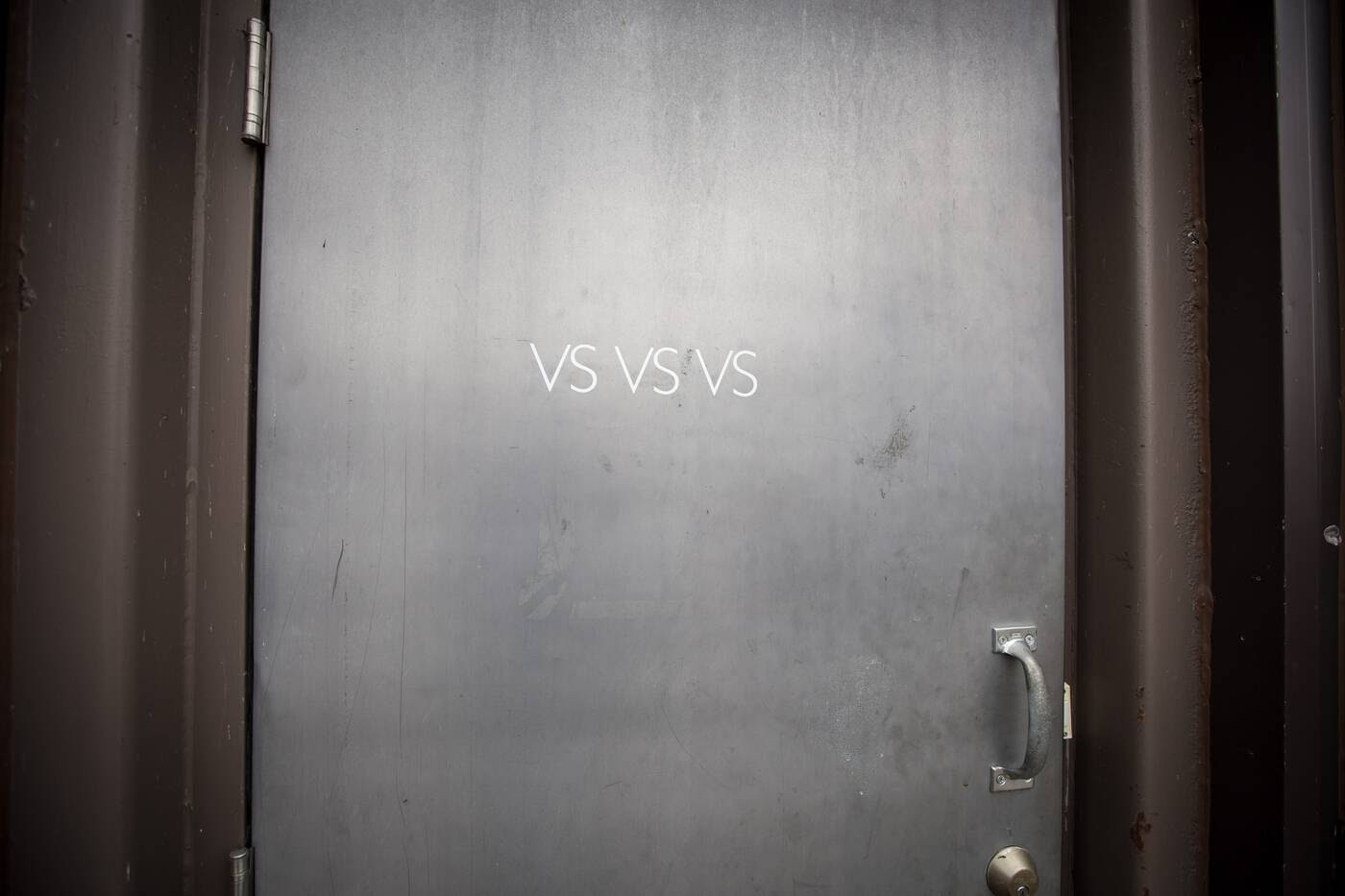 by Amy Carlberg via blogTO
Posted by Arun Augustin at 9:02 AM