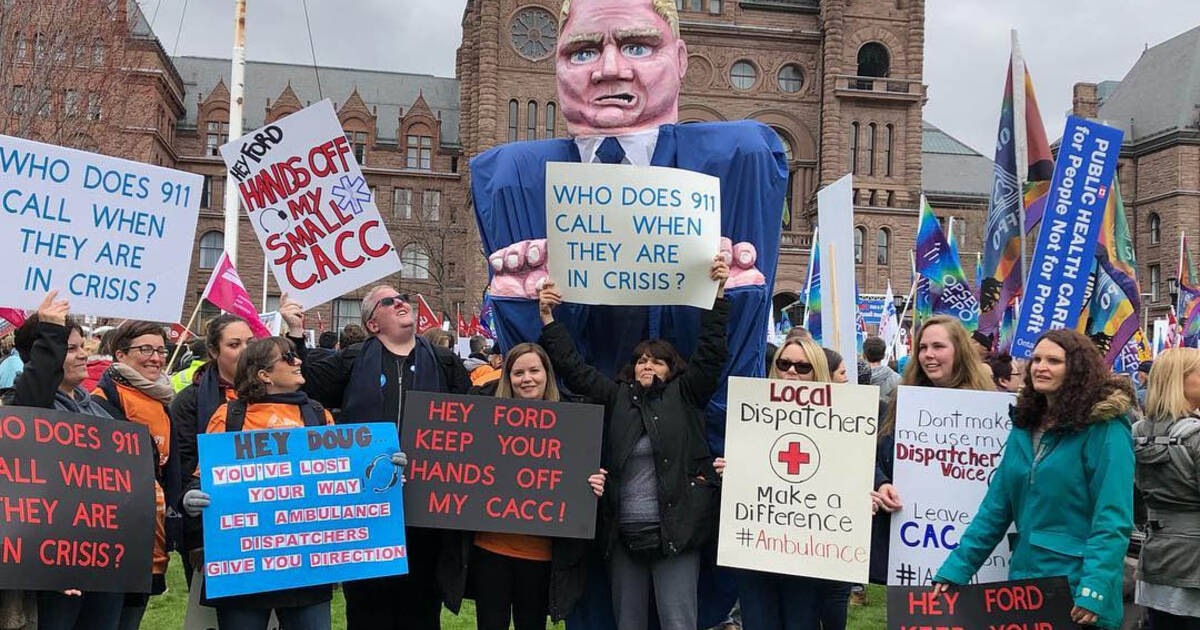 An estimated 8,000 outraged Ontario residents are marching on Queen's Park in downtown Toronto today to voice their opposition against the PC government's deep and sweeping cuts to health care services across the province.

Ford Protest - This has become a daily event.

"Ford's Bill 74 — a massive healthcare system overhaul that would open the door to selling off our public healthcare to private corporations — has moved into a crucial phase," explains a petition which asks that the bill be amended to prohibit private, for-profit healthcare groups.

Today is the rally to protect public health care.

"The new legislation Doug Ford worked to keep secret from the public will sell vital health care services to private for-profit corporations," reads an event description for today's rally at Queen's Park. "[And] impose costly mega-mergers that put our local services and hospitals at risk... IF WE DON’T STOP IT."

Healthcare workers and supporters arrived by the busload from all over Ontario this morning to fight back against Bill 74 and other changes they fear are problematic, such as cuts to OHIP and the dissolution of all 14 of the province's Local Health Integration Networks into a single agency.

Buses are already arriving for the @OntarioHealthC march and mass rally in #Toronto that will start at 11:45am @SickKidsNews and head to Queen's Park #RallyforPublicHealthCare #onhealth More info >> https://t.co/yIvLUmaYUS pic.twitter.com/YzjwQl85X0

"For the first time, more than 150,000 health professionals, nurses, support workers, doctors and tens of thousands of patient advocates are joining together in a health action day, unified in their deep concern that the Ford government intends unprecedented health care privatization," wrote the Ontario Health Coalition in a statement about their widespread initiative.

"In hospitals and other health facilities tens of thousands will wear a sticker that says 'Stop Health Privatization' and will distribute leaflets warning about the Ford government's health care restructuring plans."

I'm at the health-care protest on the lawn of Queen's Park. Thousands of doctors, nurses, paramedics, etc are here to voice their opposition to Ford govt health-care legislation. #ONPoli pic.twitter.com/I1VdHg7trl

Here in Toronto, protesters gathered at Sick Kids hospital before setting off for Queen's Park around noon.

They are currently on the lawn of the legislature building shouting and showing off their vibrant protest signs.

Even the famous CNE protest rat is on hand to lend its support for the cause.

@fordnation The Rat is at Queen’s Park this afternoon trying to kill public health care in Ontario! #publichealthcuts pic.twitter.com/shIP9yr79J

Traffic has been blocked off by police in several areas surrounding Queen's Park on account of the protest.

Massive crowds have gathered at #QueensPark in #Toronto for the #RallyForPublicHealthCare pic.twitter.com/feIWjnNXWF

Unfortunately for protesters, Ford himself will not be around to see the action in person. He is currently in New York City promoting Ontario as "Open for Business."

by Lauren O'Neil via blogTO
Posted by Arun Augustin at 10:57 AM