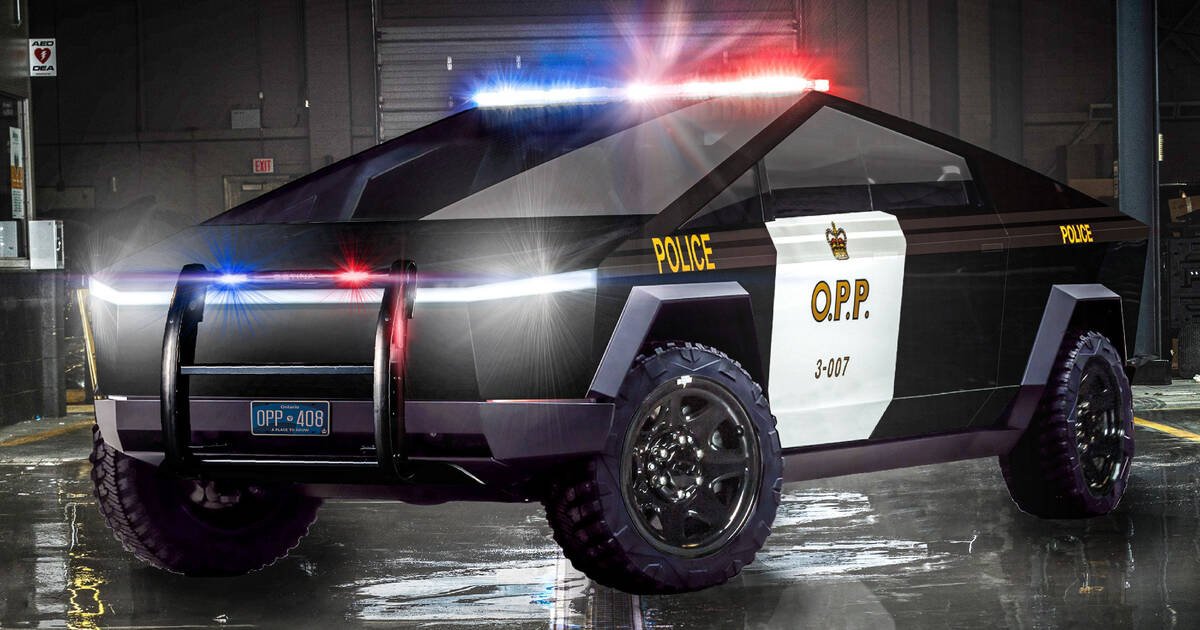 Included in the tweet were images of two futuristic-looking OPP vehicles: One, a Tesla Model X SUV with its butterfly doors open, the other, an OPP-styled version of the cartoonish forthcoming Cybertruck.

Hey @elonmusk can you suggest which model would make make a better police car? #Cybertruck or #TeslaX? pic.twitter.com/texsL1enJ3

Musk, who has more than 31 million Twitter followers, did not reply to the OPP's query.

Many others did, however, with varying degrees of curiosity, appreciation and snark.

"So you're telling us we may be able to get a free ride in the back of a Cybertruck for commiting a crime?" joked one Twitter user.

"I think Cybertruck is more imposing and intimidating, which is what you want from a police car," wrote another.

This one with the visible license plate pic.twitter.com/ubdgV0QQYM

Some Ontarians pointed out in the thread that the Model X, which starts at roughly $114,000 Cdn., might be a bit too pricey for taxpayers to stomach.

Tesla's Cybertruck, while cheaper, is still pretty pricey with an estimated starting price of aroud $40,000 when it goes into production next year.

"There is no money in Ontario's budget for toys," responded one Twitter user to the OPP.

Something a little easier in the taxpayer maybe? pic.twitter.com/gsdwhHz1nP

A lot of people are stoked about the renderings, however, and are pleased to see that a Canadian police force is considering the use of electric vehicles.

"The Cybertruck is the best choice for this, nothing can beat the weight and strength of space grade steel alloys (at least on a vehicle), overall helping keeping the police inside safe and making pit maneuvers easy and less costly," wrote one fan of the proposition.

"Battery power won't be a problem so long as you all keep it charged like you keep your gas tanks, they have about the same range usually."

If i can interject for a quick suggestion too, i think #Cybertruck is much more practical for #OPP / Police use than #TeslaX. Also, look at the built-in system for transporting ATVs. Gotta come in handy. pic.twitter.com/BBBB1INHkK

On Saturday, the OPP followed up on their tweet in another bid to get Musk's attention.

"So it seems that the #CyberTruck is coming out on top @elonmusk," wrote the OPP.

"Would you work with the OPP to design emergency lighting, storage compartments and a partition for officer safety? Could our computers be incorporated into your display screens? Would love to collaborate."

The police force was once again ignored by the eccentric and incredibly powerful Tesla founder.

Perhaps the OPP can get Musk to listen to them (and move them up the waitlist for a fleet of Cybertrucks) by actually pre-ordering some vehicles.

They wouldn't be the first: The San Luis Potosí police force in Mexico has reportedly pre-ordered 15 Cybertrucks and police in Dubai are said to be considering the same.

"Cybertruck is resistant to small arms fire and has armor glass standard," advised one Ontario resident. "Seems like a no-brainer to me."

by Lauren O'Neil via blogTO
Posted by Arun Augustin at 2:49 PM