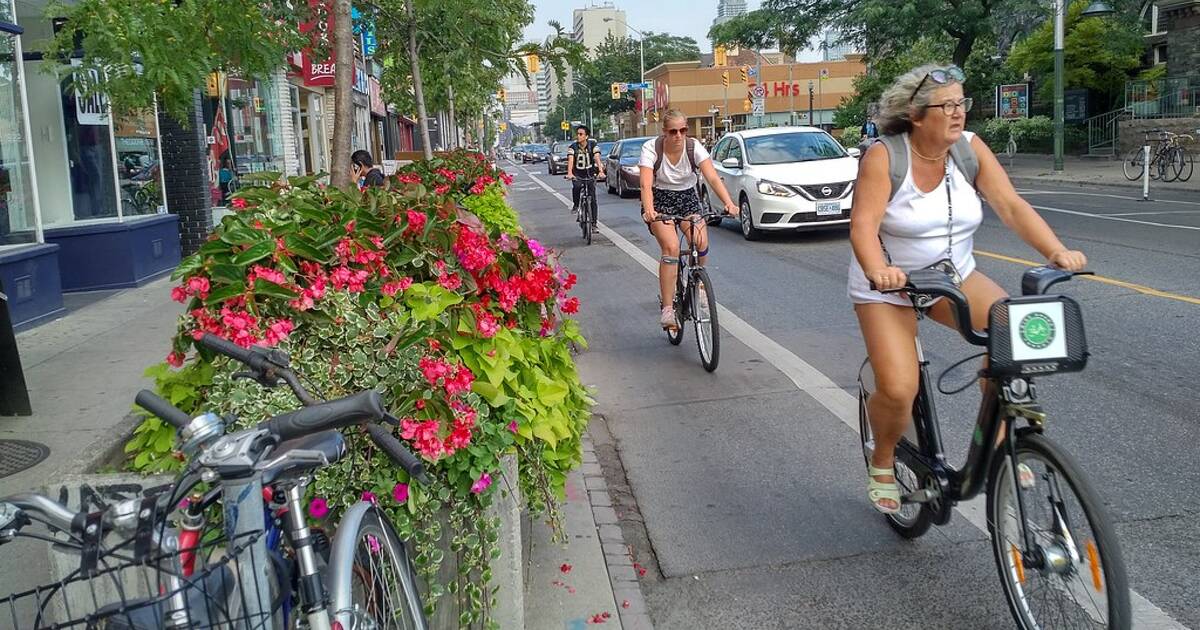 As non-essential businesses and services slowly start to reopen and people go back to work amid the early stages of economic recovery in Toronto, many are more wary than ever of the health risks of taking the TTC.

It's for this reason and more that the city has pledged to expand bikeways as a part of ActiveTO, the temporary initiative to give pedestrians and cyclists more space to get around while properly social distancing.

The city announced the list of streets which will be either partially or entirely closed off to car traffic as a part of this initiative yesterday, but they've yet to provide details on the expansion of the cycling network.

So, in the span of just 72 hours, roughly 50 community groups formed a coalition and wrote an open letter to the mayor and city council urging them to quickly install 100 km of bikeways along Toronto's busiest transit routes, beginning with cross-town Bloor-Danforth and Yonge.

"We support the mayor's recent announcement about temporary bikeways to serve as a 'default' for the city’s transit system given the social distancing imperative of COVID-19," reads the beginning of the letter.

It then goes on to outline three key recommendations: the immediate installation of cross-town Bloor-Danforth and Yonge Street 'spine' bikeways (approximately 40 km), the installation of 60 km of additional bikeways on an urgent basis (after expedited engagement of neighbourhood leaders) to mirror the busiest TTC surface routes, and the implementation of lower speed limits on roads with new bikeways to protect vulnerable and novice riders.

The coalition of organizations — which includes Cycle Toronto, David Suzuki Foundation, Roncy Reduces, TTC Riders and more — says the city's existing bike infrastructure can also be quickly augmented by extending heavily used bike lanes, such as a westerly extension of the College bike lane and extensions in both directions along Queen Street for the Richmond-Adelaide bike lanes.

"We propose, as an equally important first step, the immediate engagement of community leaders in the city's dense population clusters, especially Neighbourhood Improvement Areas, for input about the most effective location for 60 km of new bikeways in serving the transportation needs of essential workers and other residents," the letter states.

"In many neighbourhoods, residents rely overwhelmingly on the TTC, especially in commuting to downtown destinations."

We'll be doing our bit in the East End. The Danforth Study was already underway when the pandemic hit and we are finding ways to mobilize it to support the economic recovery on main street. ActiveTO is part of the rebuild, restoring consumer confidence, and a 'new normal'

The coalition says they expect the installation of the second phase of bikeways — which should be guided by local input and have a timeline
measured in weeks to address the pressing need — will be aligned
with the busiest and most crowded bus routes, including Jane, Weston, Dufferin, Bayview, Victoria Park, Don Mills/Overlea and Finch.

They say that, in a city with a 5,600-km road network, 100 km of temporary bikeways to complement the city's existing facilities can be considered "a reasonable start" and is consistent with new
infrastructure the city planned to have in place by this year as per its comprehensive 2016 Bike Plan.

The letter notes that installation on arterial roads will likely be required, since we know cyclists tend to take the same roads as motorists due to the fact that they usually provide the most direct routes to common destinations.

The coalition also says testing temporary bike lanes offers an inexpensive way of testing which routes offer the greatest benefit post-pandemic, and that the "major corridor studies" for Bloor-Danforth and Yonge — which were supposed to be undertaken under the
2016 Bike Plan — can now be economically piloted as temporary lanes.

In addition, the letter points out that adding new bike lanes will help the city with its environmental objectives by reducing carbon emissions, and it will also help to provide residents with an affordable, healthy option for transportation.

The community groups are also urging the city to offer instruction programs in cycling skills at convenient times and locations, as well as online for residents who may have little cycling experience on city roads.

They say roads adjacent to bike lanes should have reduced speed limits, and the lanes should also provide an option for residents who rely on mobility devices, such as power-assisted wheelchairs, electric-assist bicycles and cargo bikes.

"Many cities around the world have already provided alternatives to transit by installing temporary bikeways, ranging from dozens to hundreds of kilometres, to allow essential workers to reach workplaces, and other residents to obtain daily necessities," notes the letter. "We urge Toronto to do the same."

by Mira Miller via blogTO
Posted by Arun Augustin at 8:10 AM