A transcript of the Rob Ford audio tape 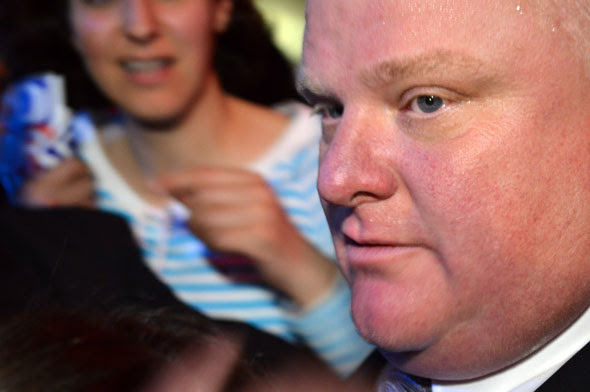 Rob Ford spent part of last weekend "ranting and swearing" in an Etobicoke bar, according to the Toronto Sun, which obtained a choppy and at times difficult to decipher audio recording of parts of the evening. According to the paper, Ford was taped at Sullie Gorman's, a grimy bar in a strip plaza on Royal York Rd. almost directly across the street from a park that bears the name of Ford's father, Doug Sr.

It's worth nothing that it's also the same shopping centre where the Globe and Mail alleged Doug Ford ran his hash empire in the 1980s.

Ford appears to be (relatively) coherent in parts of the tape and almost nonsensical in others. At first, he discusses the Pride flag controversy at City Hall, saying Tim Hudak disagreed with his call for it to be removed. Later, Ford says he's conflicted about how he will vote in a provincial election, brags he would like to "fucking jam" Karen Stintz, then appears to force people to take shots of liquor with him. At one point he appears to call someone a "wop."

What follows is a rough (and likely imperfect) transcription of the Toronto Sun tape:

FORD: "...this fucking flag up ahead of our Canadian flag. I said no ... bullshit. They said they went to Queen's Park, they said 'no way.' Tim Hudak comes out and says 'yeah, I agree with all the gays should have the ...' That's it. I lost my conservative value."

MALE VOICE: "...You actually went to Queen's Park with it?"

FORD: "No they went, the gay organization went to Queen's Park and they're on a standstill. So at Queen's Park, you have to have every member to vote for it."

MALE VOICE: "But you're a business guy ... you have a business, a successful business ... how could you vote anything else but P.C.?"

FORD: "No ... I don't mind ... As long as they vote, I'd rather have them vote against me than not vote at all. I'd rather lose to Olivia Chow than lose to anyone, man, because, you know what... [INAUDIBLE] get fucked so bad. No, I'm not coming back, once I'm done, I'm done. I'm going to California."

MALE VOICE: "How about Karen Stintz?"

FORD: [TO SOMEONE OFF MIKE] "I'm so sorry - I forgot there was a woman in the house."

RECORDING APPEARS TO BE SKIP AHEAD AGAIN

MALE VOICE: "How do you fuck your wife?"

FORD: "I'd fuck your wife [INAUDIBLE] we won't go that far.

FORD: "That's when we start talking my language!"

MALE VOICE: "When was the last time you smoked a joint?"

FORD: "These guys want me fucking covered. I said, 'nobody's going to cover me, I've got everything under control.'"

FEMALE VOICE: Rob? [SILENCE LIKE FORD IS CONSIDERING AN OFFER]

RECORDING MAY SKIP AHEAD HERE

FORD: "I don't mind talking politics, but I don't want you guys ...

RECORDING SEEMS TO SKIP AHEAD

FORD: "Oh, good. If that fucking wop over there... Sorry, I'm not saying I'm a racist, sorry ... If you don't get a shot in two seconds I'll knock your fucking teeth out.

MALE VOICE: "You know what, Robbie?"

FEMALE VOICE: "Everyone is allowed their down time."

MALE VOICE: "What do you want?"

FORD: "I want to give him two shots ... cause those two dagos are drinking together."

MALE VOICE: Did you just call me a 'dago,' really?

MALE VOICE: "You're splitting the vote!"

by Chris Bateman via blogTO
Posted by Arun Augustin at 11:34 PM