The top 5 rap battles in Toronto of all time 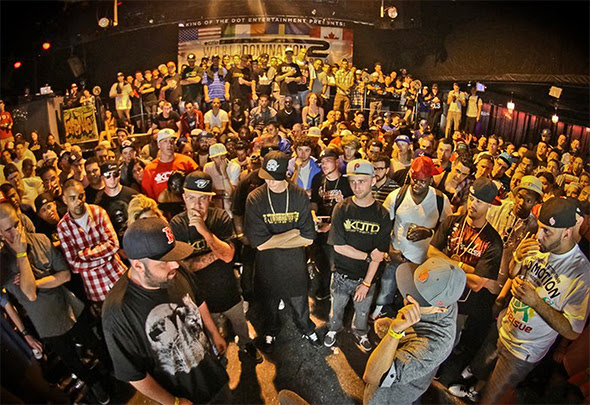 If you didn't know, battle rap has taken the world by storm. Most battles used to be done in a freestyle format, meaning that participants would improvise all of their content. Today it's safe to assume that most of what you are hearing has been pre-written.

With that comes better performance, but less spontaneity - although the best battlers can do both. Leagues have popped up all over the world: Smack/URL and GrindTime (RIP) in the USA, Don't Flop in the UK and Got Beef? in Australia, but arguably the biggest one of all is Toronto's own King of the Dot (KOTD). On February 7/8 they'll be hosting their biggest event to date: Blackout 5.

In this spirit, here are my picks for top rap battles in Toronto of al time.

The current KOTD title holder, Nova Scotian heavyweight Pat Stay met his (at the time) ex-best friend Hollohan in the ring. They settle their differences in what many call the most personal battle ever.

It's like watching two comedians roast one another, but everything rhymes. Both are incredible freestylers on top of it and this battle is filled with countless memorable flips.

This classic went down at World Domination 2, when Ottawa's Bender (who was KOTD Champion at the time) took on Illmaculate, one of the most well respected veteran battle MCs there is. This battle was also the birth of "sorry player"...

This epic contest brought LA's Dizaster in town to face New York's DNA. They had been waiting to battle for a year and after many delays and cancellations, it finally happened. What unfolded would become one of KOTD's most watched battles.

This is a 2 vs. 2 beatbox battle, so no they aren't rapping, but their skill level is undeniable and they still tactically target their opponent. Remember kids, always show love to the beatbox - without them your cyphers would suck.

by Markit via blogTO
Posted by Arun Augustin at 10:59 AM