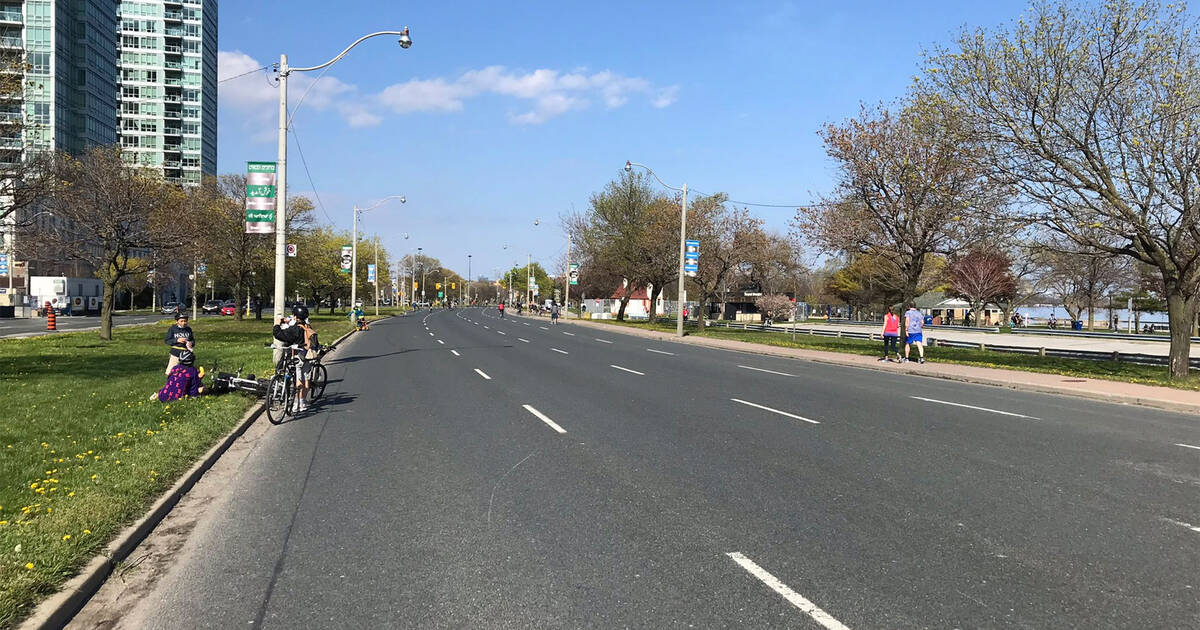 Toronto is rolling out its new quiet streets initiative, and cyclists, runners, and rollerbladers alike were out in full force today to take advantage of the car-less streets.

Since first launching the ActiveTO program earlier this week, Toronto has also closed off several more major roads just for the long weekend.

I bet there were hundreds of people biking down Lakeshore today! Goes to show how much Torontonians appreciate more space. #ActiveTO pic.twitter.com/3jEyBjIoGm

Tons of walkers and humans on wheels were spotted outside enjoying the fantastic weather today while taking in the scenery, with Lake Ontario to the south and a couple of car lanes to the north.

It was good news for regular Waterfront Trail and Martin Goodman Trail users, which are dangerously crowded on weekends.

According to the city, we have until this Monday at 11 p.m. to enjoy the Lake Shore as is before it opens back up for cars.

Bayview avenue as well. Only bicycles and pedestrians. Good vibes only. And calm. So nice 👌🏻 #ActiveTO #Toronto #SocialDistanciation pic.twitter.com/1hE3eBRMQf

Same for Bayview Avenue, which was fully closed off from Mill Street down to Rosedale Valley Road, and River Street north of Gerrard East to Bayview.

Although these temporary major street closures are just trial-runs, many are lauding the initiative, not only as a way to enforce physical distancing but also to improve cyclist safety, given Toronto's bad track record for installing bike lanes.

Only in #Toronto do we shut down main artery roads causing mass confusion and traffic just so pedestrians & cyclists can social distance. There is a wide enough bike path along lakeshore. Dumb decisions far outweigh the smart ones in this city. @JohnTory 🙄 #waragainstcars #yyz https://t.co/pgDiHTAN3U

But drivers who had planned on using Lake Shore this weekend weren't happy with the street's closure, which some are blaming for Saturday's traffic jam.

by Tanya Mok via blogTO
Posted by Arun Augustin at 7:10 PM