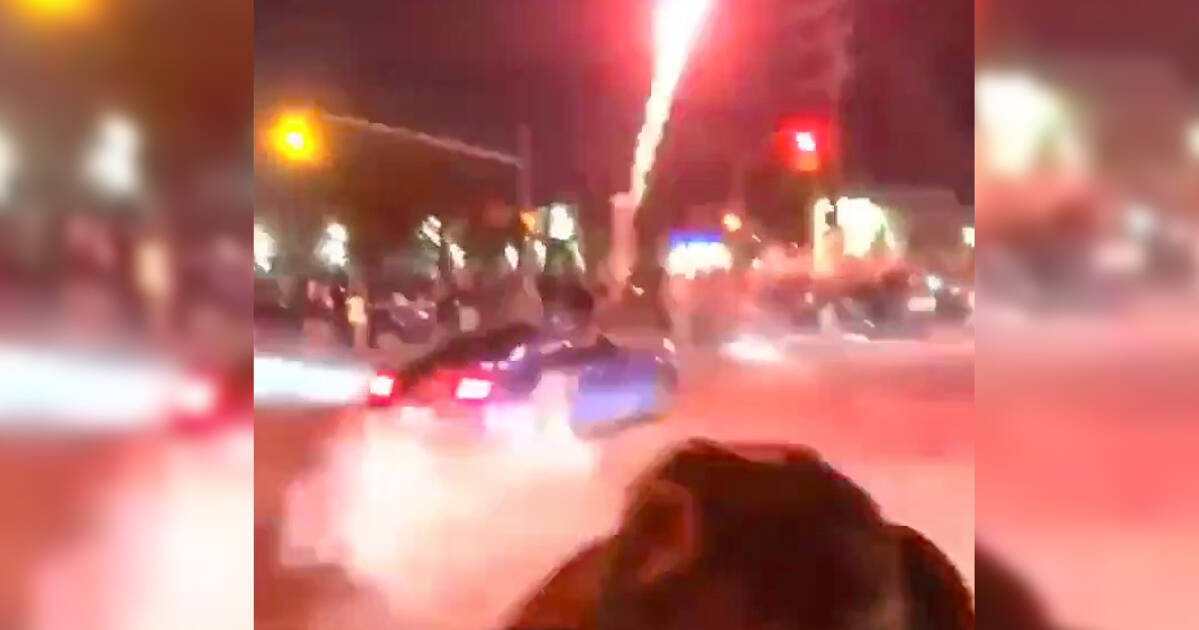 This week in Vin Diesel fans gone wild, Toronto Police found more than 300 drivers gathered around a west-end intersection for an apparent Victoria Day celebration on Sunday that involved doing donuts while shooting fireworks from cars.

In one clip, we see the car repeatedly spinning around an intersection, kicking up dust while simultaneously shooting bursts from what appears to be a roman candle firework up into the sky.

A car was caught on camera doing donuts while shooting fireworks in the middle of a Toronto intersection this long weekend https://t.co/aYAmX1gPvY #Toronto #LongWeekend #VictoriaDay #Fireworks pic.twitter.com/32TaYtSGcN

Mobs of people can be seen in videos filming the stunt with their phones while standing around the intersection, which police confirmed to be that of Dixon Road and Carlingview Drive in Etobicoke.

Toronto Police say they responded to a "crowd control" situation in the area not long after midnight on May 17 to find some 300 vehicles gathered at the scene.

"Reports that people were out of their vehicles watching other vehicles doing donuts," wrote TPS Operations on Twitter early Sunday morning. "Police are on scene investigating."

But seriously, how are you gonna fit 300 vehicles in the intersection?? pic.twitter.com/ebJuzCwCCZ

Additional videos shared by apparent attendees further show just how massive the crowd gathered for this event was.

They also suggest that stunt driving enthusiasts are growing ever bolder in their defiance of the law as roads remain relatively empty due to the ongoing pandemic.

Figures released late last month by Toronto Police show a 600 per cent jump in stunt driving incidents between March 23 and April 27 of 2020, from just 32 in 2019 to 222 during the same time period this year.

Police hate it, but they can't seem to stop it from happening right now, especially in Toronto's west end.

Of course we had fireworks! pic.twitter.com/QwWtXsE9Yi

Just last weekend, Toronto Police busted a meetup of over 200 vehicles in the Queensway and East Mall area. One constable said that scene looked like something out of the "Fast & Furious" film franchise.

Drivers were reportedly seen doing donuts, burnouts and otherwise performing activities that could be considered the "dangerous operation of a motor vehicle," an offence which is punishable by fines of up to $10,000 and 10 years in jail under the Criminal Code of Canada.

Police did not announce any arrests at the time but told the Canadian Press that the drivers involved were "part of a known stunt-driving group in the city."

An investigation into Sunday's incident is ongoing.

by Lauren O'Neil via blogTO
Posted by Arun Augustin at 8:22 AM